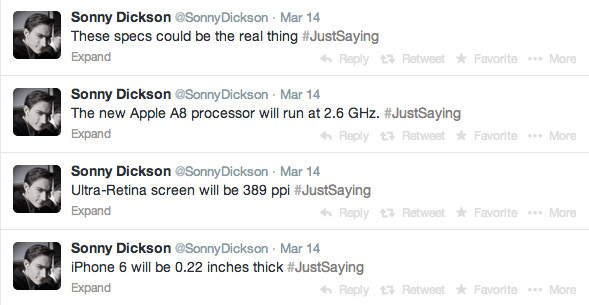 With only a couple more months to go until Apple's rumored launch of the iPhone 6, Sonny Dickson has come out with rumored specifications of the device on his twitter account. Dickson, who last year leaked the iPad Air, Mini, and iPhone 5C well ahead of its proper release date, revealed that these specifications could be "the real thing" and ended each post with the hashtag "#JustSaying".

Dickson went on to tweet that the iPhone 6 would be .22 inches thick (roughly 5.5mm) compared to the current generations iPhone 5S which measures in at 7.6mm, and the "ultra-retina" screen would have a 389 ppi compared to the iPhone 5S's 326 ppi. While there weren't any mentions of size or what kind of screen Apple would be using, it has been rumored that Apple would be utilizing new pixel technology for the display, which could explain the lower ppi count compared to its competition. Lastly, Dickson tweeted that an A8 processor running at 2.6Ghz would power the new iPhone. Naturally, we should take this as rumor until a more concrete source can establish its legitimacy. Fortunately, we might not have to wait much longer to find out.