The Galaxy S7 Edge isn't a cheap phone, and as careful as you may be, accidents do happen. It's well worth protecting your new smartphone and there are plenty of cases that do a good job. Is Samsung's LED View Cover such a case?

Mobilefun have once again kindly provided us with a sample to answer that very question. 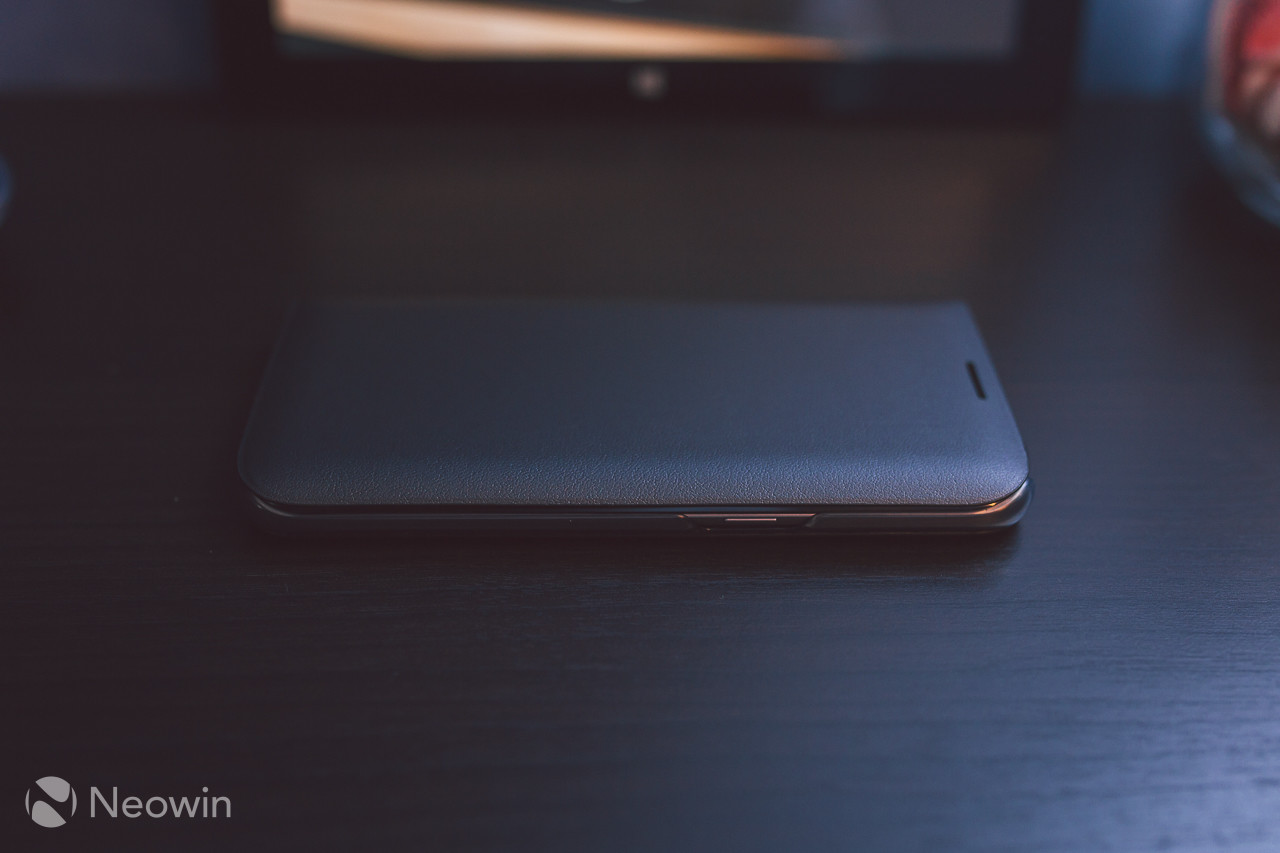 It certainly feels like it could be upon lifting off the plastic packaging. What is strikingly obvious is the fit and finish. I've held cheap flip covers before and they feel their price. The Samsung cover costs £50 ($72) and feels it.

The surface is finished in a textured almost leather feel that's fairly soft to the touch. The spine is flexible enough to allow the flip cover to fold over onto itself, ideal for one handed operation of the S7 Edge. 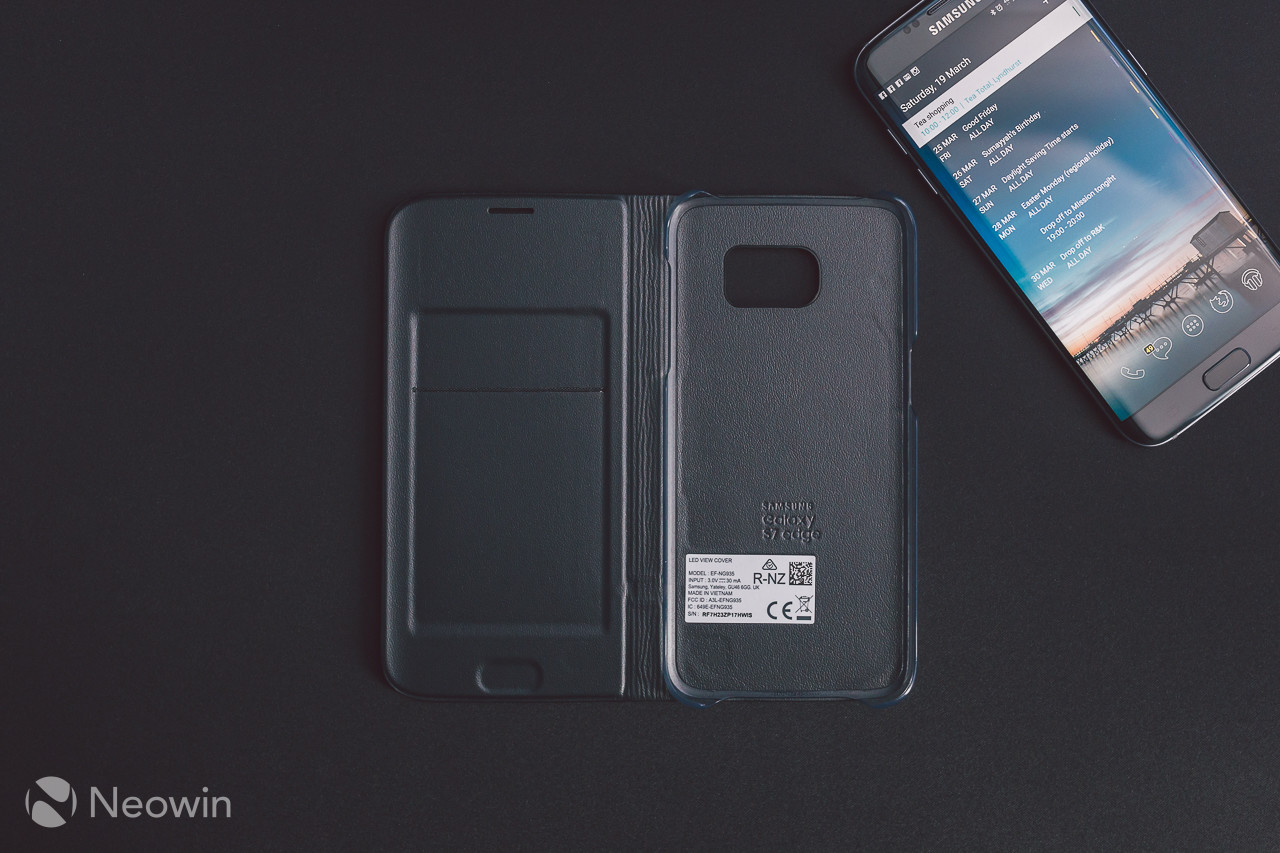 Beneath the faux leathery exterior the S7 Edge seats into what could otherwise be described as a snap on TPU case. Once attached it is very secure, and with the cover closing over the front, only the harshest of drops would cause the phone much damage - At least this is what it feels like initially, although an exposed top and bottom bezel area of the phone means a shunt on any sharp surface edge on these areas might result in damage to the phone.

The LED View Cover isn't just an ordinary case though. As the name suggests, it houses an area containing rows and columns of tiny flat LEDs that light up for notifications and calls.

When closing the cover, the LEDs will light up to show the time. They animate in and out in a pleasing fashion as opposed to just flashing on, then going away just as abruptly.

This LED area is also touch sensitive and calls and timers can be handled with a swipe gesture left or right. The S7 Edge can also be used with the cover closed, notice that there is an earpiece cutout.

These are all welcome touches (no pun intended!) by Samsung which helps differentiate the LED View Cover over third party alternatives that are going to be cheaper. You get what you pay for is certainly a suitable phrase in this instance.

The design has been well thought out. The bottom of the S7 Edge houses the MicroUSB, speaker and headphone ports. This area is left uncovered by the case as the snap on part attaches by the corners only at the top and bottom of the phone.

In the below photo you can see the exposed area mentioned earlier in the review. 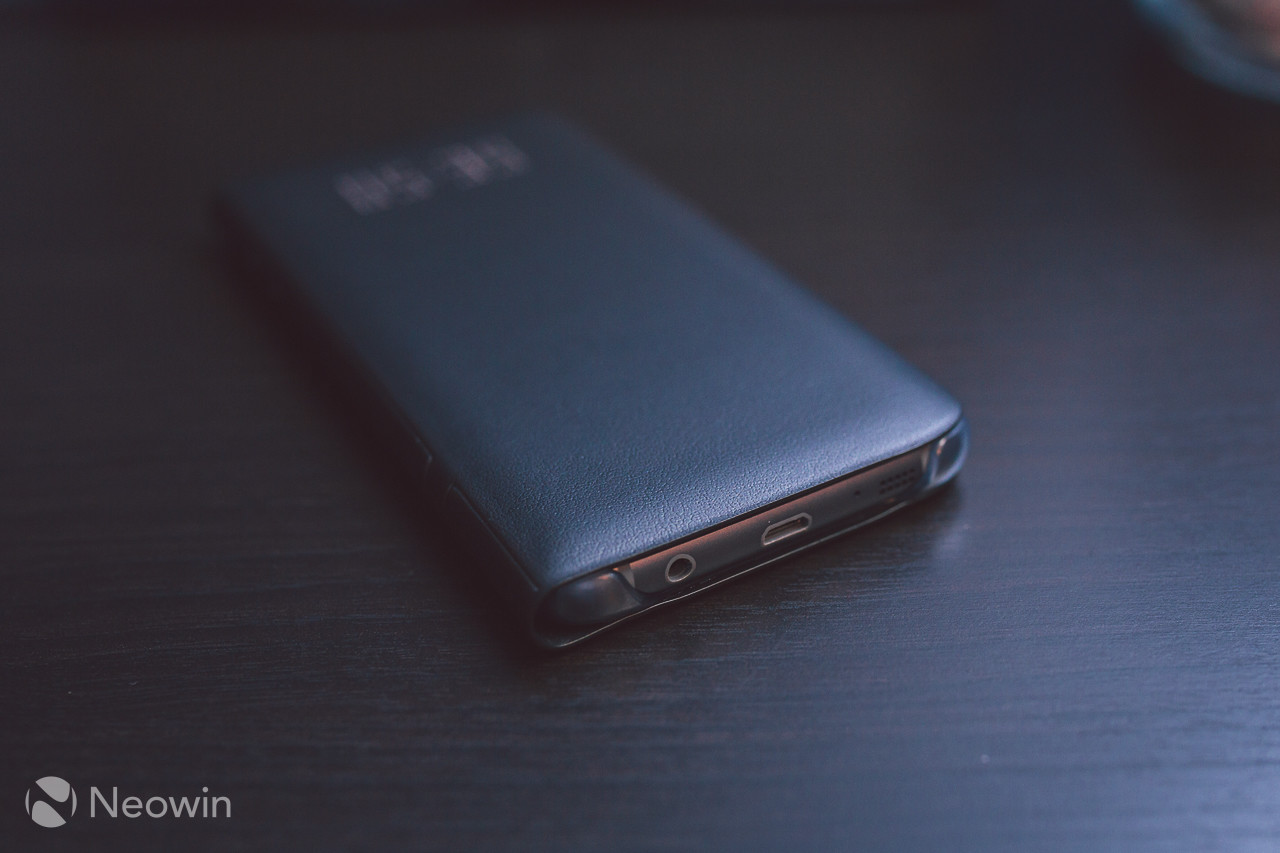 The spine of the LED View Cover is soft to the touch and flexible. This allows for the volume buttons to be used without issues and Samsung has neatly printed the + and - symbols. 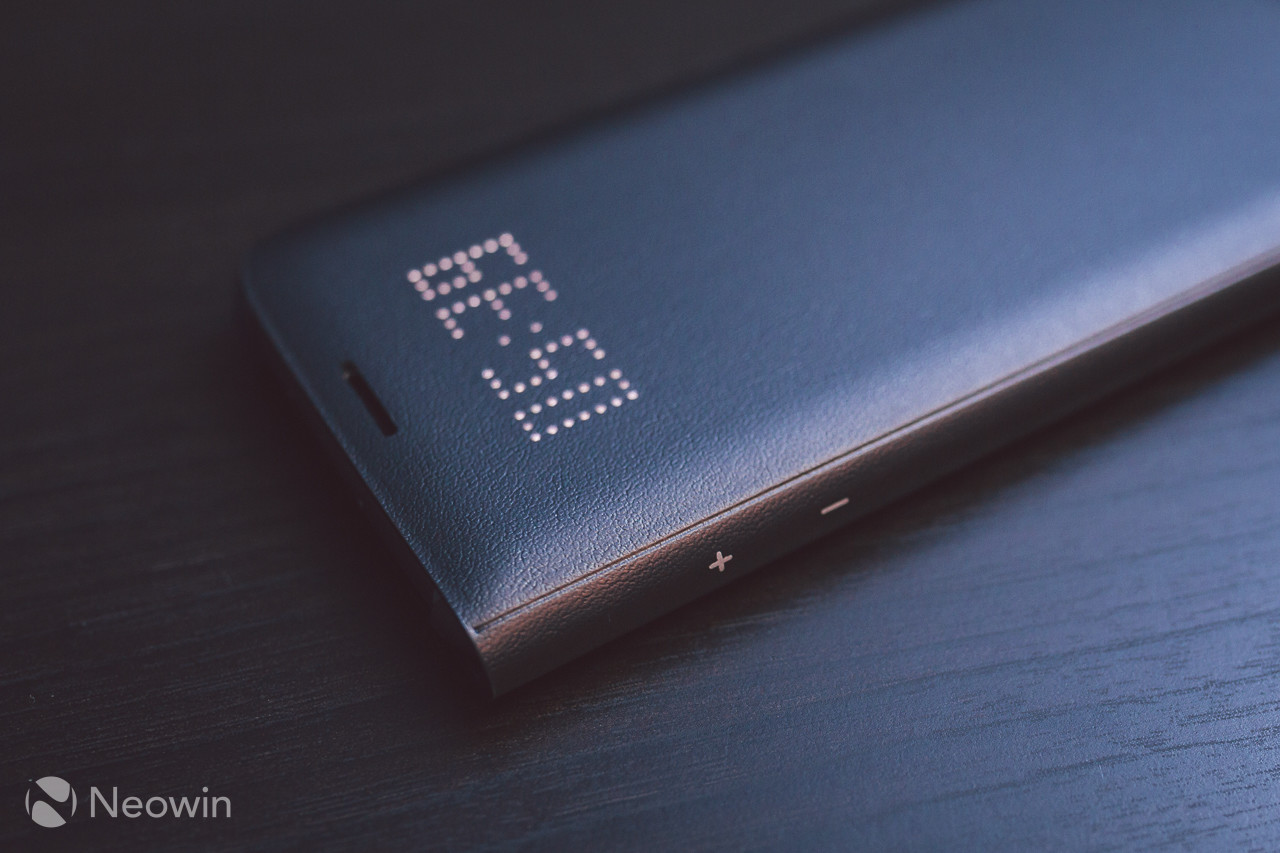 The rear of the cover bears the camera window and Samsung logo. I measured the thickness of the case with the cover closed and it came to 13.7mm. That's an extra 4.75mm thicker than the S7 Edge. A sizeable increase in bulk for sure, and certainly not something that would feel sleek in your average front trouser pocket. Those who wish to keep their Edge in slim pockets might want to re-think their case options here.

The LEDs are strictly white in colour output, but from the accessory page from within the S7 Edge's settings you can assign dot matrix icons to contacts. Samsung calls this feature "LED Caller ID". 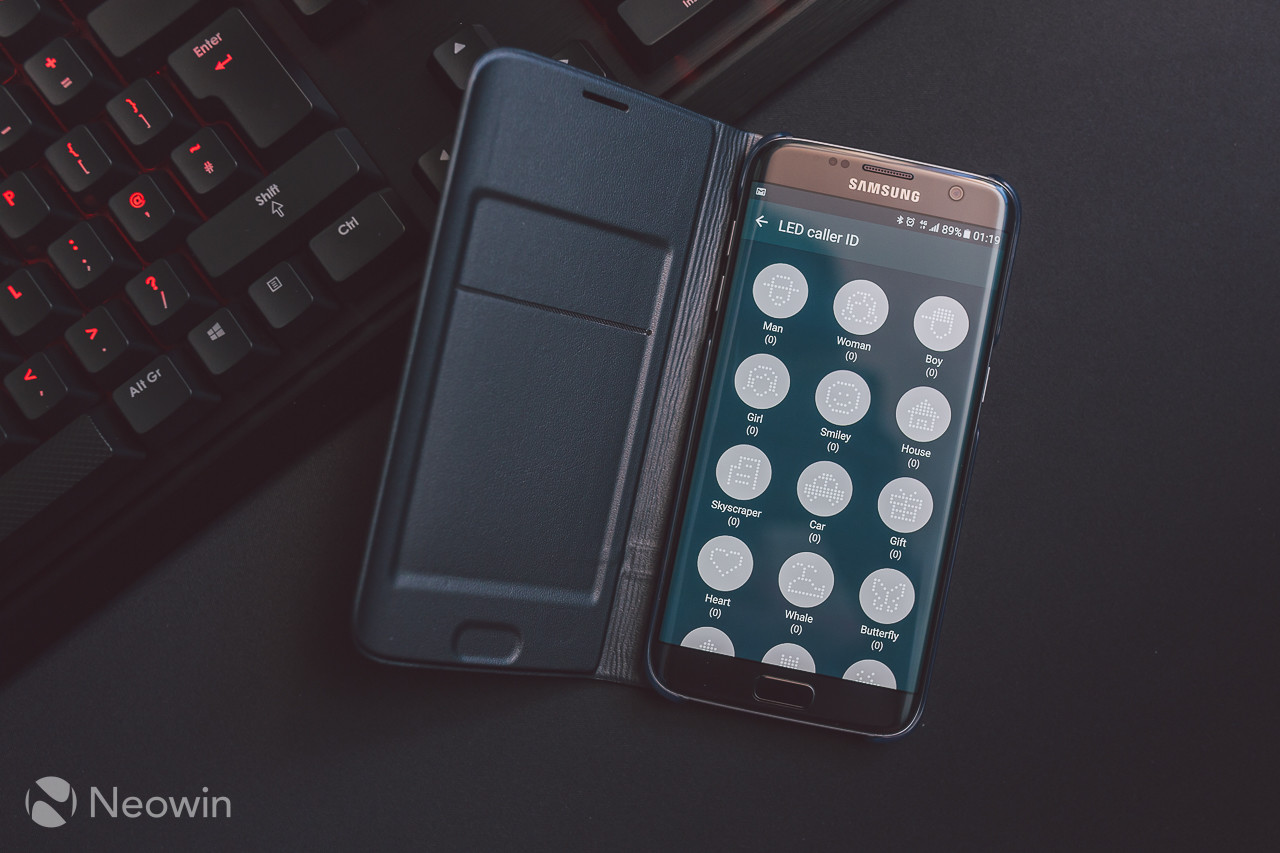 When a contact with an assigned LED ID calls, this is what is shown. 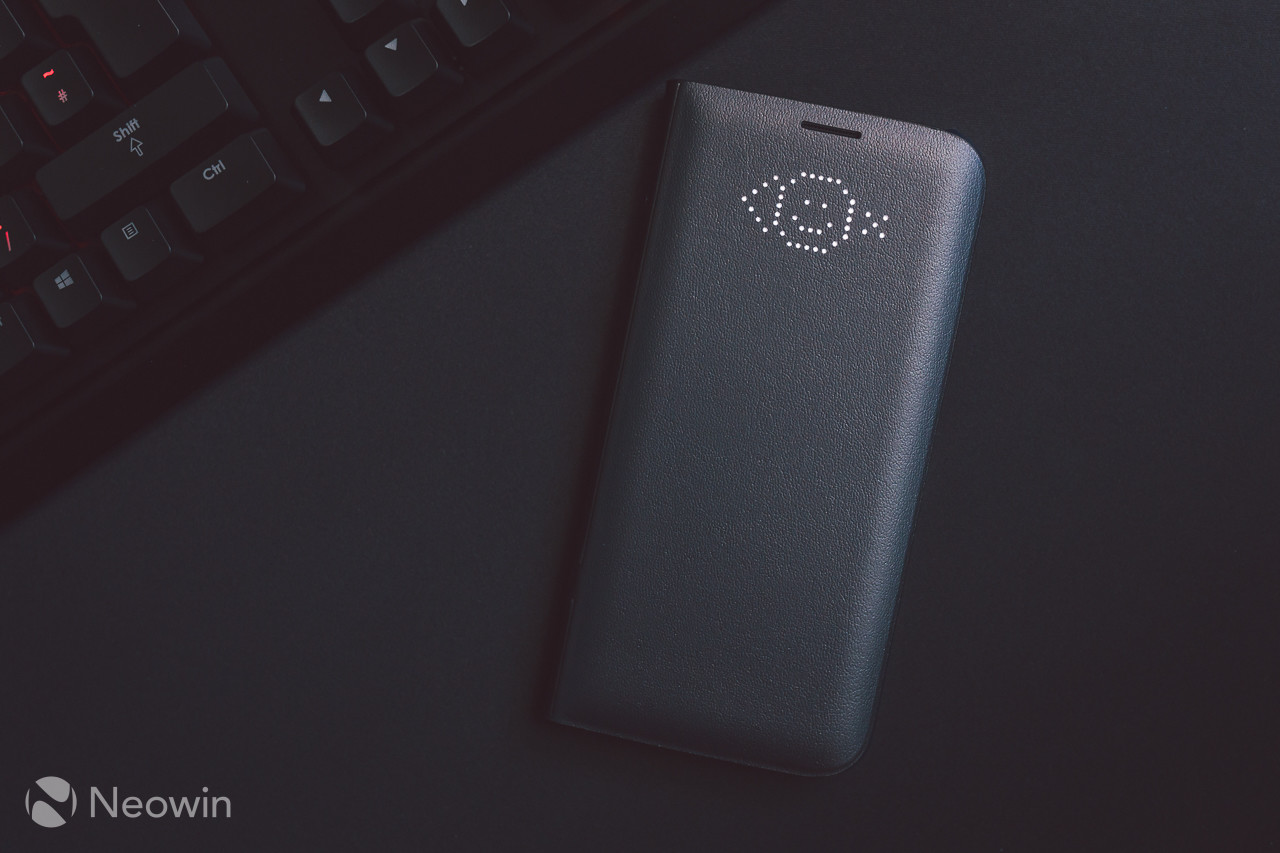 Likewise, missed call notifications are shown with the number of missed calls. 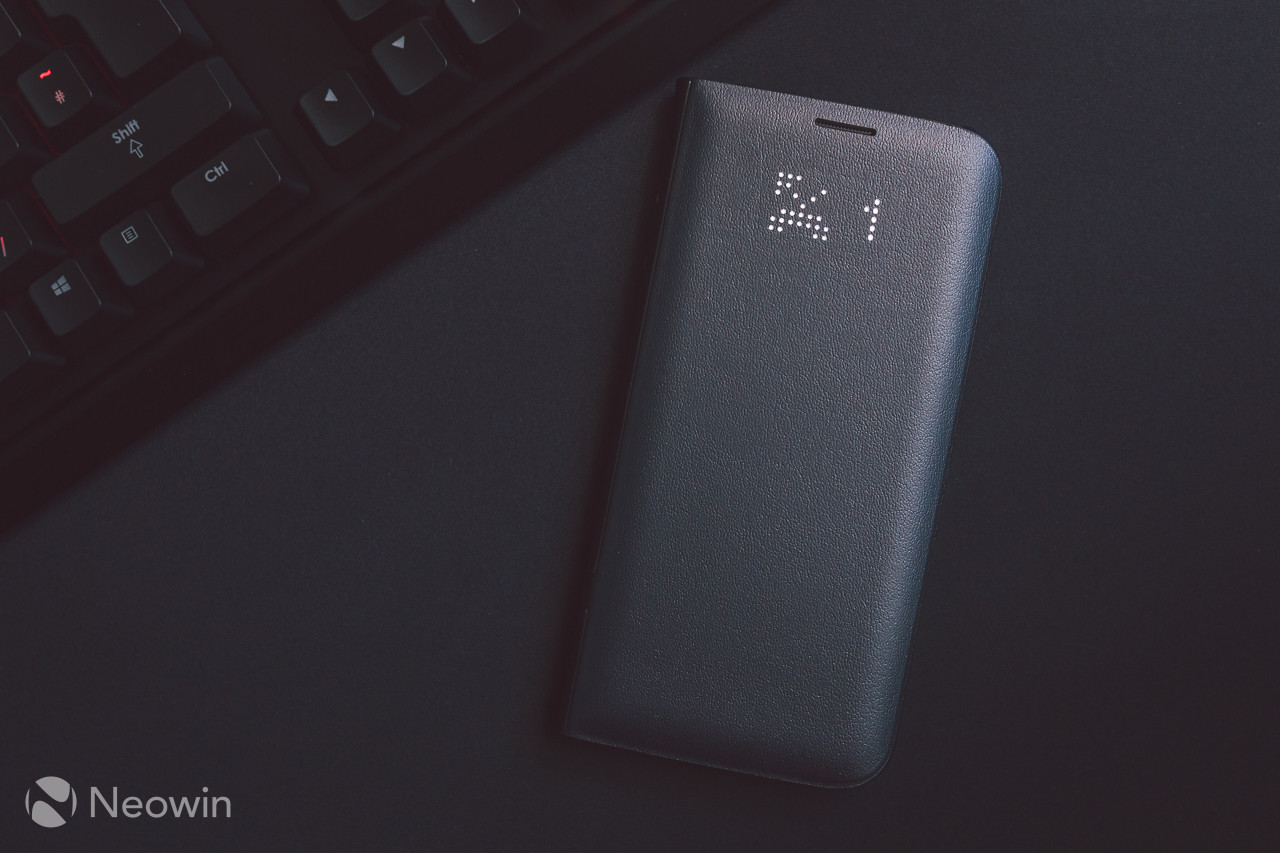 The Samsung LED View Cover is a premium product and certainly suits the Galaxy S7 Edge. With that said, I can't help but feel it takes away style elements of the phone that makes it stand out from the competition. Those who prefer flip cases won't be concerned about this though I'm sure.

My main gripe with this case is that the top and bottom bezels are left exposed, and the edges of the front and back of the LED View Cover are not reinforced to absorb an impact. They are soft, so will succumb to any impact and pass it through to the phone's metal bezel possibly causing damage. 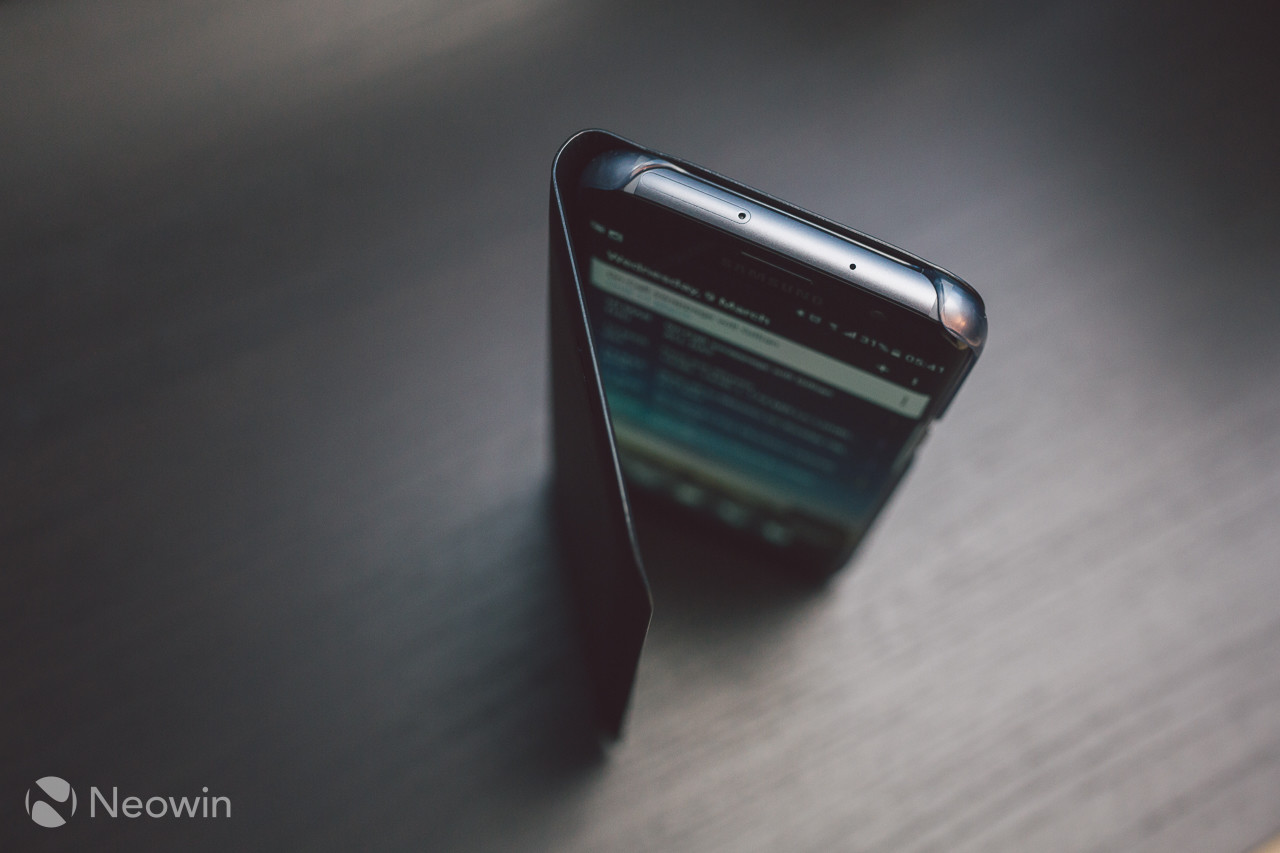 On top of that, the cover is quite bulky, so won't be pocket friendly for some.

I am pleased to report that both wireless charging and NFC work with the Cover attached. While it may be quite thick, this does not affect its near field comms capabilities. Perhaps the case has been built with this in mind, it wouldn't surprise me.

It would have been nice to see the cover receive waterproofing, but since there is no mention of it in the specs, I'm going to have to assume it is not waterproof. This is a shame since the S7 range are IP68 rated devices.