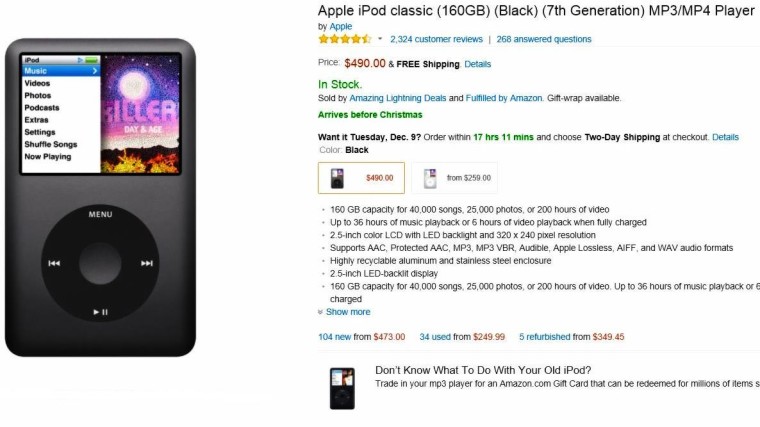 Apple's iPod has seen a bump in the news lately, mostly due to the lawsuit that was filed against the company earlier this week. Apple killed off its longest-running device, the iPod Classic, back in September of this year. Apple quietly announced this around the same time the company was showing off new the iPhone 6 back in September . The killing of the iPod Classic may have been premature as fans of the popular portable music player are shelling out ridiculous amounts of cash for a dead product.

Looking at some listings on major online retailers like Amazon in multiple markets around the world, the iPod Classic sale prices average between $480 (£308) and $780 (£500), with listings going as high as $1,043 (£670) in extreme cases. If you're unaware of what the iPod Classic retailed for prior to its discontinuation, you'd be looking at around $250 for a 120GB iPod Classic new directly from Apple's own retail stores.

Owners of iPhones may ask why people would bother with an iPod device when you can just use your phone. Perhaps the best answer: the iPod Classic is a simple, durable device that's less expensive than the iPhone, and has superior battery life with greater storage capacity for music & videos. Replacing an iPod is certainly much easier and less cost intensive than replacing a newer iPhone.

For those still wishing to purchase a like new/new condition iPod Classic, you're best bet is to shop multiple online stores. Some Amazon listings offer iPod Classic devices for less than others if you're not dead set on certain color/storage options, and there's always local buying opportunities through services like Craigslist.