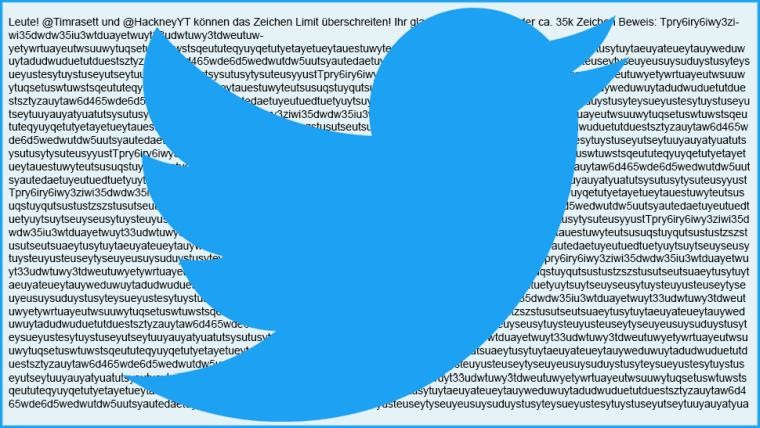 Twitter has been experimenting with upping the character limit on tweets to 280 characters, but two German users came up with a way to really annoy you. How about 35,000 characters?

The hack happened over the weekend when user Timrasett, working in conjunction with HackneyYT, found an exploit that sent out a massive missive of gibberish. Prior to the seemingly endless string of characters was a message from the two (as translated by Google):

“People! @Timrasett and @HackneyYT can exceed the character limit! You do not believe us? Here’s about 35k characters proof.”

Timrasett later apologized for the now-deleted tweet, saying they just wanted to show Twitter was "easy to crack." HackneyYT chimed in, acknowledging that the two would keep trying to find loopholes.

It is not entirely clear how the two were able to get around Twitter's auto-truncating URL system. The two users were briefly suspended, but are now back. It is unclear why they didn't try to take advantage of Twitter's bounty reward system for hacks, especially since they rebuffed numerous users attempting to know their secret.

Twitter responded to Gizmodo, saying that it has taken steps to ensure it doesn't happen again. It also encouraged users to use the bounty system rather than showing off the exploits.