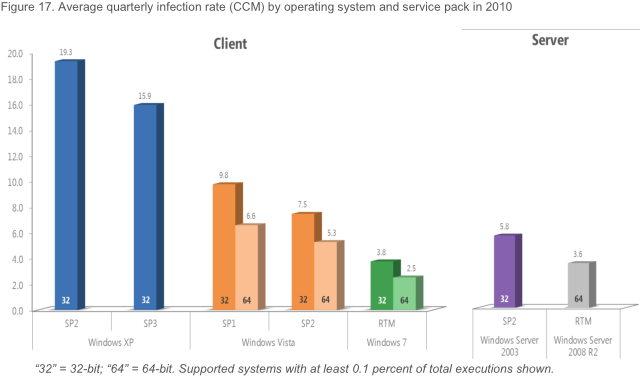 Windows 7's marketshare continues to grow at a steady pace at the expense of its two older siblings, Windows Vista and XP, according to the data from StatCounter. In terms of global usage, Windows XP is at 46.44%, Windows Vista at 12.5%, and Windows 7 at 32.64%. Good news for everyone, right? Well, if these adoption numbers aren't convincing enough, perhaps this might convince you (or your technologically challenged peers) - Windows 7 has the lowest infection rates per quarter amongst Microsoft's currently supported operating systems.

The observations drawn from this chart are made clear in the report:

One reason may be that 64-bit versions of Windows still appeal to a more technically savvy audience than their 32-bit counterparts, despite increasing sales of 64-bit Windows versions among the general computing population. Kernel Patch Protection (KPP), a feature of 64-bit versions of Windows that protects the kernel from unauthorized modification, may also contribute to the discrepancy by preventing certain types of malware from operating. 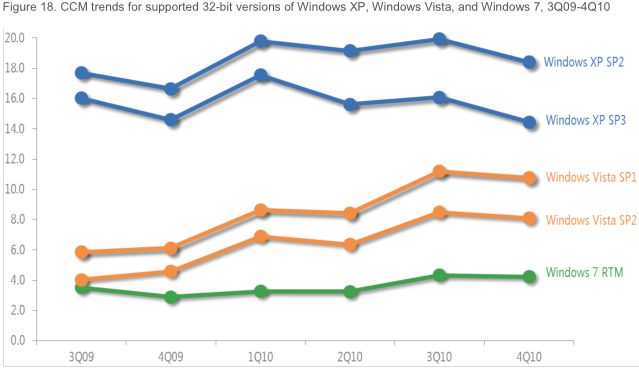 The full Security Intelligence Report for 2010 may be viewed here.

Thanks Ci7 for the tip on the forums!