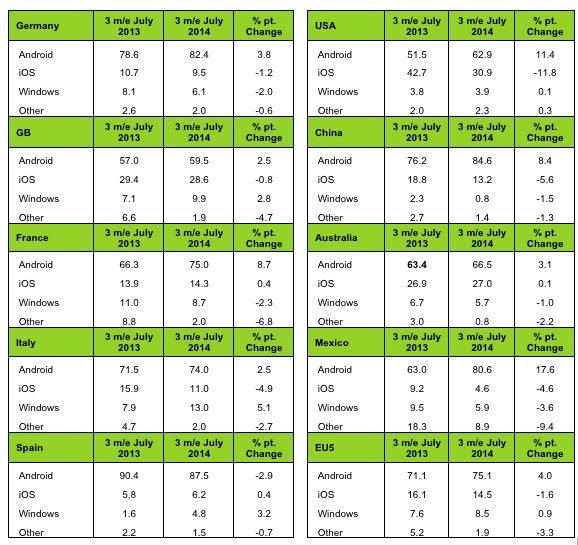 Microsoft's Windows Phone growth efforts have included rapid updates, billion dollar acquisitions and what might be the best personal digital assistant on the market. Despite all of this, Windows Phone still has very small market share around the world and the latest data from Kantar is sending mixed signals.

Kantar gets its data by conducting interviews, lots of them, over a million in fact, and aggregates several different channels of data to construct a view of the sales of smartphones in several markets.

For the three months to July 2014, (May, June, and July) five of the ten markets that Kantar surveyed showed growth for Windows Phone but it also dropped heavily in the other markets too. In the US, Windows Phone went from 3.8% to 3.9% of sales for the time period and in Great Britian, the sales percentage jumped from 7.1% to 9.9%. Italy had the strongest growth for the platform with a leap from 7.9% to 13%; these figures represent year-over-year growth.

It is important to know that even if a percentage drops, it could still result in higher sales of devices as more phones are being sold this year than in 2013. But, for the larger drops such as Mexico, it is likely safe to say that Windows Phone sales in terms of units shrank too.

You can take a look at all of the changes in the image at the top of this post that also includes iOS and Android data as well. For the most part, Android was able to steal market share from iOS in many of the markets.