When Microsoft announced Windows Phone 7, it made a bold proclamation: current smartphone operating systems are doing it wrong. They’re trying to be too much like computer operating systems when they should be something else entirely.

“Phones kind of look like PCs, and the phone is not a PC,” Joe Belfiore, Windows Phone program director at Microsoft, said when the smartphone platform was announced at Mobile World Congress 2010. “We wanted to revisit how we thought about [smartphone interfaces in terms of] design.”

It's somewhat ironic, then, that Microsoft is trying to force a tablet interface – the same style of interface the company designed for phones, only enlarged – on PCs, while also shoehorning a traditional PC interface on tablets.

The interface of Windows 8 and Windows RT – the x86 and ARM versions, respectively, of Microsoft’s next operating system – is a bit of an odd beast. Microsoft’s championed its Metro design language with the operating system’s new Start screen, other interface elements and Metro apps, but at the same time the company isn’t abandoning the Aero interface it created for Windows Vista and continued using in Windows 7. It’s an odd choice, since the two designs seem to have competing ideas.

Metro is a design language focused on simplicity. It provides users with quick glances of information through the use of live tiles; the design language also emphasizes typography, solid shapes and vector icons.

Aero, on the other hand, is being updated in Microsoft’s new operating system to incorporate a ribbon interface, which has primarily been featured in the company’s Office suite, although it has also been featured in a few other applications. The ribbon is the antithesis of Metro’s simplistic appearance: it provides users with a plethora of icons and options, as well as tabs that provide even more features.

Microsoft’s made it clear it wants Metro to be the defining Windows experience across all platforms, including e-readers, phones, tablets, computers and televisions. The Xbox 360 is the most recent Microsoft platform to be updated with the Metro interface.

The Xbox 360’s Metro dashboard was launched in December to mixed reactions from both gamers and developers. Gamers complained about the amount of advertisements and poor navigation schemes; developers cited the interface’s clutter as a roadblock to customers looking for new games, causing decreased sales on Xbox Live.

In a recent article, Lee Bradley of Xbox360Achievements took Microsoft to task for the Metro dashboard’s “poor functionality.”

“The original Xbox 360 dashboard may not have been the most attractive, but you could get everything you wanted from it quickly and easily,” Bradley wrote. “[While the new Metro dashboard is] undoubtedly attractive, the tile-based redesign has been an absolute nightmare for users.”

According to Bradley, the Metro dashboard has covered the interface with advertisements and made it nearly impossible to easily navigate to game-related content. 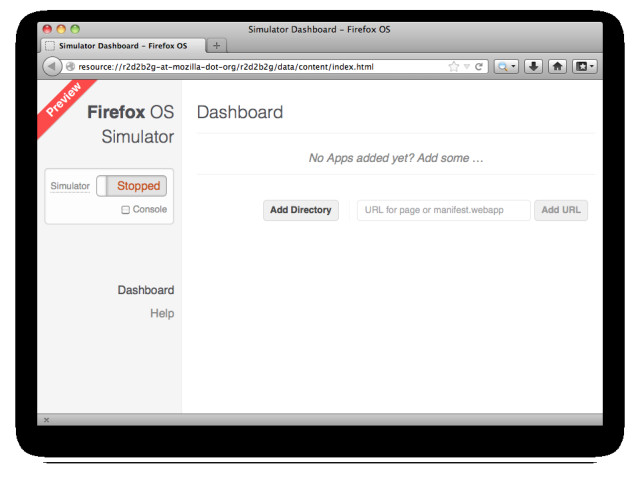 Developers have made similar complaints. One independent developer, Nathan Fotus of Mommy’s Best Games, went so far as to call the new dashboard “an advertiser’s dream” in an interview with Eurogamer and said “it’s easy to get lost” in the Metro interface. According to Fotus, the new interface has buried games behind an excessive amount of tiles and button clicks.

It’s not just gamers and independent developers upset with the new interface – developers at larger studios are issuing similar opinions.

In the current issue of Game Informer, Robot Entertainment CEO Patrick Hudson complained about the new dashboard’s “sense of discovery.”

“If you power up your Xbox 360, games aren’t going to be the thing you see there,” Hudson said. “If you want to discover a new XBLA game, you’d have to be pretty committed to that as a process because you’re going to have to dig and find it.”

Robot Entertainment’s next game, “Orcs Must Die! 2,” won’t be released on XBLA. The original “Orcs Must Die!”was an Xbox 360 console exclusive, releasing on Windows (via Steam) and XBLA. It was even published by Microsoft on the Xbox 360.

Microsoft’s attempted to address developer complaints by redesigning the Game Marketplace on the Xbox 360. So far, however, no developers have indicated the update has alleviated the navigation problems or provided an increase in XBLA sales.

The Windows Store in Windows 8 and Windows RT may find itself facing similar problems.

The store features a design reminiscent of the Xbox’s 360’s Game Marketplace: only a few notable apps are located on the main page; users can then view a list of recently released apps in each category, as well as the top paid and free apps. Currently, more in-depth navigation features are lacking – to find other apps, users will have to open the charms bar, select search, and type in what it is they’re looking for. Sorting options only exist when searching apps, but not in the default store view, similar to the app store on the iPad. While this interface may be adequate for tablets, it’s not as useful on computers. 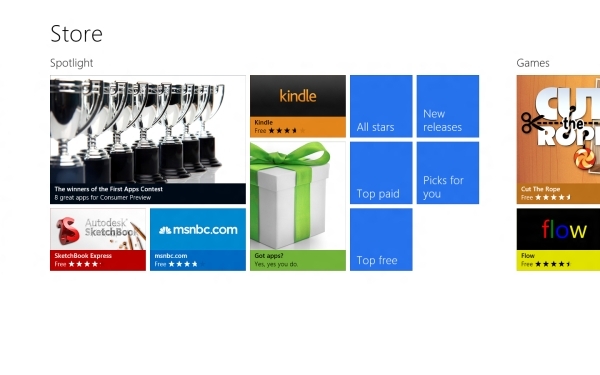 There are two important differences between Metro on the Xbox 360 and Metro on Windows 8.

First, the Xbox 360’s controller and Kinect are nowhere near as precise as a mouse and keyboard, making the interface change not as important of an issue on the Microsoft console in terms of ease of navigation. Secondly, Xbox 360 users have no choice in what interface they use – at least if they plan on playing their games online or using any other online services, such as Netflix or Hulu, as the Xbox 360 forces users to have the latest version of the dashboard to connect to the Internet.

Computer users aren’t faced with that issue – if they want, they can stick with a previous version of Windows, much like many users downgraded from Windows Vista to Windows XP.

While the final versions of Windows 8 and Windows RT obviously aren’t available yet, the current Windows 8 Consumer Preview feels like a Frankenstein-esque mash-up of Metro and Aero. When a user boots up his or her computer, he or she is immediately confronted with the new Metro interface on the Start screen. It’s certainly gorgeous, but most computer users of Windows 8 won’t be spending much time here beyond clicking the Desktop tile to launch into the traditional Windows experience.

Once in the desktop, however, one significant change is apparent: gone are the Start button and Start menu, mainstays of Windows. Instead, users are faced with a clunky interface that forces them to mouse over certain indistinguishable areas of the desktop in order to get to the new charms bar and back to the Start screen. There are no buttons indicating these features exist; instead, users will be given a tutorial showing the new features.

Since you’re reading Neowin, chances are none of this is news to you. Either you have the Windows 8 Consumer Preview installed, or you’ve at least read about how the new operating system works and seen screenshots or videos illustrating the interface. But for the average computer user, using Windows 8 is going to be more a chore than learning experience. Transitioning from a previous Windows operating system to OS X would probably prove to be an easier task for most.

In comparison to the desktop, the Start screen and Metro apps on a computer are, at best, unintuitive. At worst, they’re frustrating and unnecessary.

Certain aspects of the desktop are strangely Metro. The task switcher, boot screen and security screen now all have a Metro design. Leaked screenshots of a recent version of Windows 8 have shown that Microsoft is attempting to create a more Metro look in its ribbon interface as well. But Windows 8 isn’t alone in having strange interface choices – Windows RT has one of its own.

The inclusion of the desktop makes little sense for Windows RT. No applications will work on the ARM-based operating system beyond the file explorer and Microsoft Office, which will come bundled with all copies of Windows RT. Beyond these applications, it seems unlikely that Windows RT users would ever need to enter the desktop. But the desktop isn’t a necessity for Windows RT users. They can simply unpin the tile from the Start screen and go on their merry way. The same can’t be said of the Start screen on Windows 8 – it’s integrated in the operating system, and users have to interact with it.

Windows RT may be largely the same as Windows 8 (with the exception of x86 applications not working on the ARM-based operating system), but there’s a reason it may succeed if Windows 8 fails: the touch input method.

Yes, Windows 8 can also be used on tablets, but there’s little incentive to go the x86-powered route on tablets. Traditional desktop applications will be available, but these applications lack a touch-friendly interface. And as far as gaming goes, most developers won’t spend resources attempting to implement a touch-friendly interface for what will likely be a small audience. 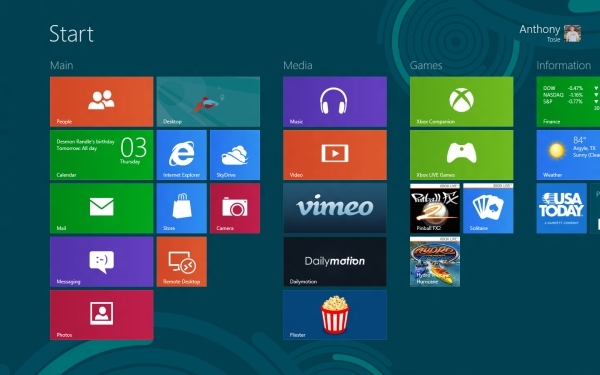 The difference between Windows on a tablet and Windows on a computer is clear: the Start screen and Metro apps were designed with a touch interface in mind. They feature large tiles that aren’t as necessary on a computer, and only the important features are incorporated in applications. In the current Music app preview, for instance, users can’t rip a CD or change the metadata of an MP3 file – it essentially only provides playback and music purchasing capabilities.

Much like the Metro dashboard on the Xbox 360, not all developers are convinced the current Metro interface on the computer is a good thing.

Gabe Newell, co-founder and CEO of Valve, is a former Microsoft employee. But even Newell isn’t sold on Windows 8, if a recent story on Linux gaming site Phoronix is to be believed. According to the story, Newell’s “negativity for Windows 8 and the future of Microsoft was stunning.” Since the majority of Windows 8’s desktop features remain unchanged, it’s reasonable to assume Newell’s negativity is in regards to the Metro interface.

The problem with Windows 8's Metro interface on computers is that it abandons the core reason Metro exists: to make navigation easier. Metro works on Windows Phone and Windows RT because it gives the exact design needed – a large, touchable interface that provides information that can’t otherwise be displayed with ease. On computers, however, this information isn’t as vital; more information can be displayed in the traditional desktop, and more features are available.

Microsoft needs to be willing to adapt Metro to the platforms it’s used on; right now, it’s not adapting to the Xbox 360 or computer’s navigation style. That doesn’t mean Metro has to be abandoned. As one of our forum members has proven with his Metro skin for Steam, the design language can be incorporated in the standard desktop experience. Microsoft’s also made fantastic Metro desktop applications of its own, including the Zune client software and its upcoming Office release.

The response on our forums indicates a divisive split between whether users adapt to the new Metro interface in Windows 8 or skip this iteration of Microsoft’s popular operating system. While some feel Metro provides an easier experience, others immediately reverted to Windows 7, similar to how Windows Vista users reverted to Windows XP.

It remains to be seen how the general public will react to Windows 8 on the desktop. Microsoft appears to be betting the farm on Windows 8, with Microsoft CEO Steve Ballmer calling it the company’s “riskiest bet” ever at the Gartner Symposium in 2010.

Whether or not this bet pays off could determine the future of Microsoft’s Windows line and how Metro is adapted to Microsoft-powered platforms.