If you're reading this article, you are likely more security conscious and tech-aware than the majority of computer users. Most people just want to be able to have a computer for basic tasks and everyday living, but never consider the security hazards they leave themselves open to. If anyone was to send some of the less aware computer users a link to a malicious Java or Flash file they almost definitely would fall for it, hook, line, and sinker. Mozilla wants to change that, as shown below. 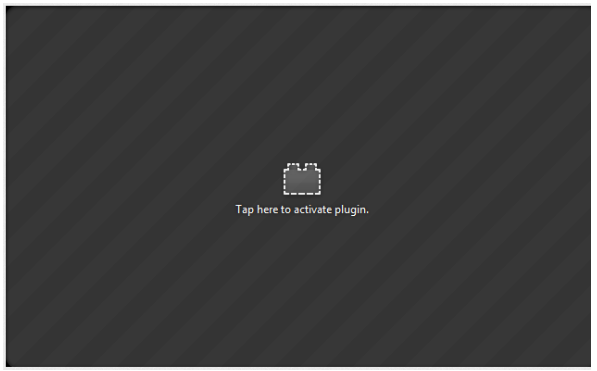 Don't be fooled, it's an image ;) This new feature will roll out with Firefox 14.

As Sophos observes, the company is adding "click-to-play" functionality to Firefox 14. At present, the version of Firefox released on the normal stream is 12, though Mozilla's aggressive releases mean that the feature will trickle down quickly. Click-to-play functionality is not exclusive to Firefox, with the Opera web browser also including the functionality. The change also means that Firefox will consume less memory when in use, going some distance to relieve the browser of its memory consumption issues, for which it is notorious.

Users who have used NoScript or Flashblock will know what Mozilla are adding: the black box signifying a plugin, which can then be clicked to enable it. Questions have already been raised by different tech bloggers and authors about whether this is truly going to add any meaningful security to Firefox or not, though at the moment it is only in the prerelease streams, such as Nightly and Aurora. Therefore, the Firefox users with more knowledge of their browser will be the ones experiencing the change earlier, and will be best able to suggest whether or not this is going to make a major contribution to Internet security or not. Mozilla are known for their focus on Internet security and an open web, so it probably will be possible to disable it via the "about:config" menu.