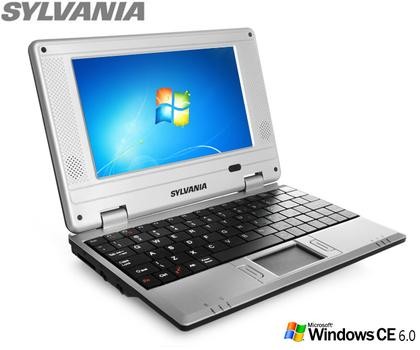 Everyone wants to think they are a great shopper, as they try to find the best deals they can, either in stores or online. Today, the website Dailysteals.com has a limited time offer on a Windows netbook that's on sale for just $39. Yep, just $39 and that price is good until midnight Eastern time tonight.

The website has the information about the netbook, the Sylvania SYNET7WID, but the first clue that indicates this deal may not be as great as it seems comes early when it is revealed that the version of Windows it has inside isn't Windows 8, or Windows 7, or even Windows XP. It's Windows CE 6.0, the older embedded version of the OS that was used as the basis for the now discontinued Windows Mobile.

The Sylvania SYNET7WID just has a seven inch screen, which is small even for a netbook. It's also not a brand new model but one that's been "Factory Recertified" with a 90 day warranty. It does have three USB ports, an SD card slot, WFI and an Ethernet port.

On one hand, getting a small netbook for just $39 does sound like a good deal. On the other hand, you do usually get what you pay for and the old Windows CE OS may not be able to handle the kinds of applications and activities you may want in a netbook, even as one as cheap as this one.