Analysts. Love ‘em or hate ‘em, they’re full of… well, something. Occasionally, that something turns out to be right. And while we’ve got no comment on the matter, one of them just said that it’ll be 2014 before Windows 8 even begins to take hold. Kind of like how Windows 7 didn’t surpass Windows XP until the very year that its successor was going to be released.

Forrester’s Frank Gillett predicts that while Windows 8 and its sister products, Windows RT and Windows Phone 8, will stop the marketshare bleeding Microsoft is currently experiencing, it won’t really start to turn things around for a few years. In Forrester’s vision of the future, Windows 8 is going to solidify Microsoft’s total dominance of about 30% of the personal devices market up until 2016. 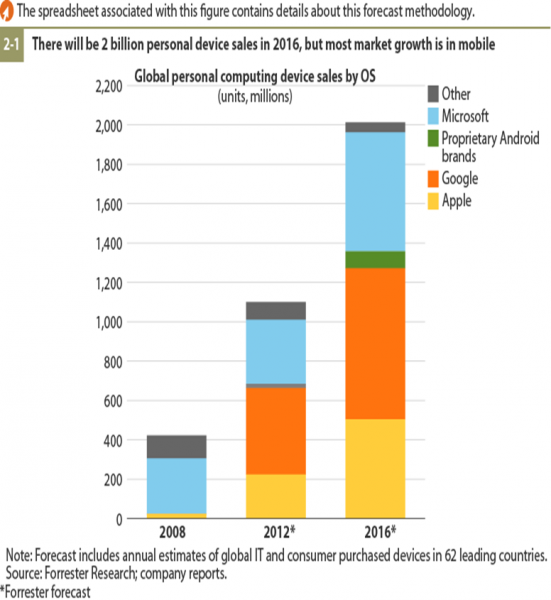 By then, they think that Redmond will have a solid hold on a measly 14% of the smartphone market which, while not impressive, is certainly a lot better than its current position of about 3.6%. They’ll be a little better off in the tablets market, with somewhere along the lines of 27% of unit sales. Desktop dominance isn’t expected to change, no matter how badly some folks hate Windows 8.

In the end, Forrester doesn’t see a whole lot of change over the next couple of years, at least as far as marketshare is concerned. Microsoft owns desktops, Apple owns tablets, and Google owns phones. On the other hand, who even listens to analysts these days?