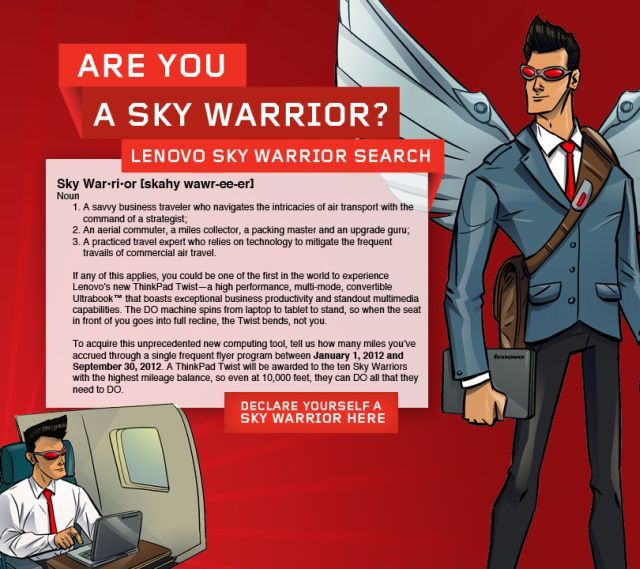 Lenovo is doing some interesting promotions for its upcoming lineup of Windows 8-based products, including a spy-themed video directed by Goldeneye helmer Martin Campbell. Today, Lenovo has launched a new campaign that surrounds its ThinkPad Twist notebook-tablet hybrid.

The company's press release is aiming its sights on the frequent business traveler, who Lenovo thinks will appreciate the 3.5 pound ThinkPad Twist, which can switch from a full notebook to a full touch screen tablet, along with a couple of intermediate modes. Pricing for the ThinkPad Twist starts at $849.

The contest is linked to the company's Facebook page. People can go to the page beginning today and enter "the number of miles accrued through a single frequent flyer program between January 1, 2012 and September 30, 2012." The top 10 frequent flyers who enter the content (and have their points verified, of course) will get a free Lenovo ThinkPad Twist, as well as being named "Sky Warriors" by the company.

Lenovo seems to be going all out to promote their Windows 8 line up well ahead of the other major PC makers. It will be interesting to see if Lenovo's early promotions will be effective.