Market research analysts Gartner have released worldwide smartphone sales data for the last quarter, and it seems that the only platform that’s going to be celebrating these results will be Android. In a nutshell (and if you can’t be bothered to read through the breakdown below), the figures tell a simple story: Android up; iOS, BlackBerry, Symbian down; Windows Phone flat. 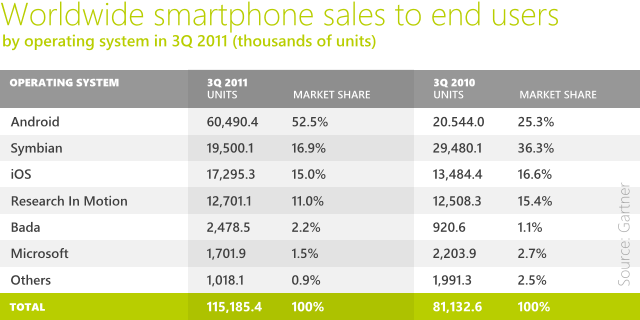 The global market for mobile devices grew by 5.6% to 440.5 million sales to end users worldwide, including smartphones and feature phones (or 'dumb phones', if you prefer). Over 115 million smartphones were sold around the world in the third quarter.

Android now commands a staggering 52.5% of the smartphone market and that figure is even more astonishing when you consider that, this time last year, it had less than half that, with 25.3%. Android sold more than three times as many smartphones as the next biggest seller, the dwindling Symbian platform, which has seen its market share more than halved over the past year, falling from 36.3% to less than 17% last quarter.

Android’s main rival, iOS, actually saw its market share fall. Sales of Apple smartphones were up by almost four million units year-on-year, but the growth in the global smartphone market as a whole meant that its share of the market in fact decreased, from 16.6% to 15% by the end of September.

Sales of RIM’s BlackBerry devices remained almost stagnant (fairly modest growth of fewer than 200,000 sales), but as with Apple, the growth of the wider market outpaced the growth of the platform, and so RIM saw its market share slide yet again, this time by over 4%, leaving it with just 11% worldwide.

But Microsoft’s Windows Phone platform again failed to live up to its potential. Year-on-year, Microsoft’s global smartphone market share fell from 2.7% to 1.5%. Sales in the third quarter were almost completely flat compared with the previous quarter; 1.702m in 3Q, versus 1.724m in Q2, with quarterly share actually declining by 0.1%.

Roberta Cozza, principal research analyst for Gartner, attempted to put these figures into some context:

“Android benefited from more mass-market offerings, a weaker competitive environment and the lack of exciting new products on alternative operating systems such as Windows Phone 7 and RIM. Apple’s iOS market share suffered from delayed purchases as consumers waited for the new iPhone. Continued pressure is impacting RIM’s performance, and its smartphone share reached its lowest point so far in the US market.”

RIM’s prospects for reversing its declining share aren’t looking good; there’s demonstrable lack of interest in its product among consumers, and its next-generation devices - the first of which, the BlackBerry ‘London’ was leaked yesterday – are at least six months away.

Windows Phone is arguably in a better position to stop its decline, with the first new Nokia handset powered by the Windows Phone 7.5 OS officially going on sale tomorrow. The Lumia 800 has so far received overwhelmingly positive reactions and reviews from the media and the blogosphere and consumer interest appears to be high, on the back of an aggressive marketing push by Nokia and Microsoft. Nokia remains the top vendor of mobile devices worldwide with over 105.3m handsets sold in the last quarter, but it remains to be seen whether it can translate that into sales of its Windows Phones. Gartner believes that the combined efforts of the two companies will see improvements in the fourth quarter, but that “a true turnaround won’t take place until the second half of 2012”.

Given the pace at which Android devices are flooding the smartphone market, they’ve got a massive challenge ahead of them.