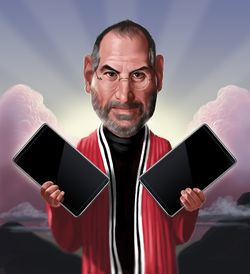 Scientists working on a BBC program in the United Kingdom that has been investigating various brands effects on consumers, has claimed that the Apple brand works directly on the parts of our brain that deal with religion.

According to Crave, the program which was first shown on BBC Three in the UK last night is entitled “Secrets of the Superbrands” and has presenter Alex Riley investigating the appeal of tech brands such as Nokia, Apple, Google and Microsoft.

The show asked people to air their views on what Apple would be like if they were a person rather than a company. The answers were wide-ranging from the usual “Spoilt…kind of snobby” to “the sort of person who might invite you to their birthday party, but when you got there you'd be doing everything they wanted to”

The interesting part came later on, when World of Apple blogger, Alex Brooks, was placed into an MRI machine. The machine scanned his brain while showing him pictures and photos of Apple based products, when doing so, there was a large increase in activity shown in the visual center of his brain.

His scans were then compared to those of various religion fans, where the neuroscientists noted very similar effects. This left them to state that Apple products can stimulate the brains religious responses, something that will please many people who have said that Apple can often be described as a “cult”.