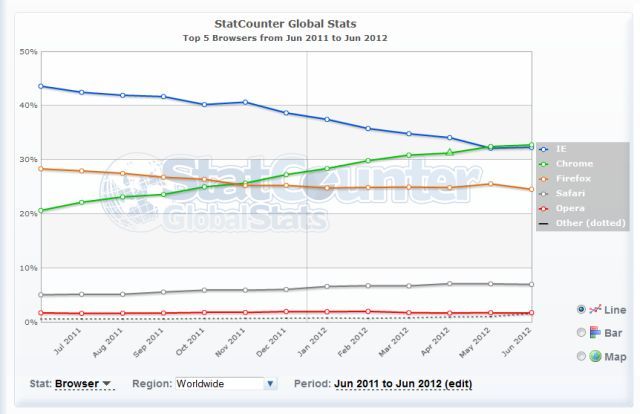 Earlier this week, Google announced that its Chrome web browser for PCs now has 310 million users worldwide, up from 160 million users from a year ago. In May, StatCounter claimed, according to their data, Chrome was now the most used web browser on PCs worldwide, overtaking Microsoft's Internet Explorer. Microsoft has previously discounted StatCounter's data as not being as accurate as Net Applications, which the company has referred to in the past when it offered up its own IE market share stats.

Now, StatCounter's latest data for the month of June shows that the battle between Chrome and IE may have reached a stalemate of sorts. According to their information on web browser market share for June 2012, Chrome is now used by 32.76 percent of PC users worldwide. However, that number is just barely above May 2012's number of 32.43 percent. In the past several months, Chrome has seen its portion of the browser market share jump by one or more percent per month, on average.

By the same token, StatCounter shows that IE's total market share was 32.31 percent for June 2012, a tiny drop compared to 32.12 in May 2012. IE has seen its share of the browser market drop by one or more percentage points per month for the last several months.

Of course, this could just be a one month aberration. We should also point out that Microsoft's preferred statistics source, Net Applications, still shows the combined versions of IE as the most used web browser platform worldwide with 54.02 percent, with Chrome in third place with 19.08 percent (Mozilla's Firefox is second with 20.06 percent, according to Net Applications).

The statistical deviation of data in this format produces a result that resembles a tie for these two products.