Windows Phone 8.1 is now rolling out to existing devices around the world, following the recent launch of the first two handsets designed around Microsoft's latest mobile OS. The flagship Lumia 930 is one of those new Windows Phone 8.1 devices, but it's the Lumia 635 - its more affordable sibling - that's the star of the company's latest ad. 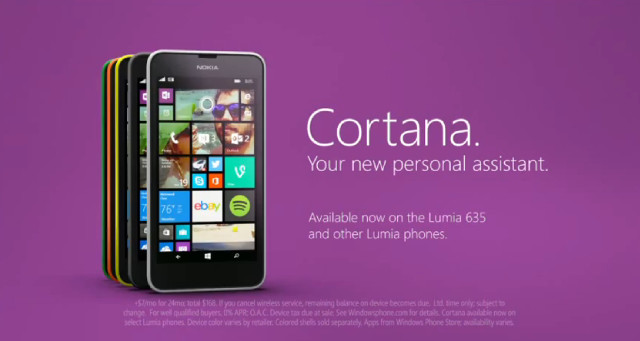 The Lumia 635 costs as little as $99 in the United States, but that hasn't stopped Microsoft from pitting it against the much pricier Apple iPhone 5s in a comparison of the two handsets' digital assistants. The ad features a guy asking Cortana to remind him to wish his wife a happy anniversary the next time she calls; Cortana responds by identifying his wife from his contacts as Caroline, without him mentioning her name, and setting a reminder for later. Siri, on the other hand, can't help with such a request.

Next, he asks Cortana to remind him to buy roses at any flower shop, and of course the assistant lines up the reminder as expected. Once again, Siri is unable to assist. Cortana's final act is one that doesn't even need the guy to make a request - he gets a traffic alert telling him that he should leave now if he wants to beat the traffic and get to the restaurant in time to meet his wife. That leaves Siri rather impressed.

The ad is just 30 seconds long but still manages to highlight a couple of Cortana's most useful features. Check it out in full below: