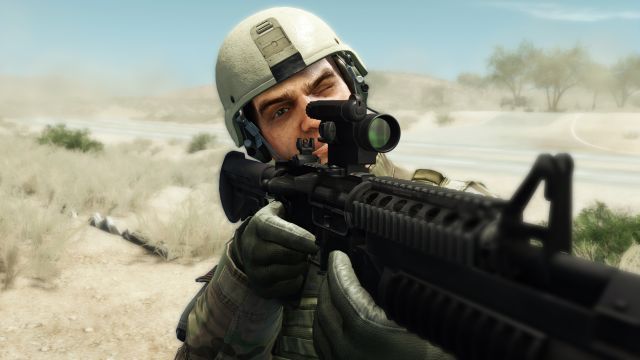 Crytek's CryEngine 3 game development tools have scored a major new license but its not for a commercial game. A press release from Intelligent Decisions has announced that the tools and game graphics engine will be used for Dismounted Soldier, a new training simulator made for the US Army. The simulation has a whopping $57 million price tag. According to the press release, Dismounted Soldier is being developed to "enable U.S. soldiers, leaders and units to train in a virtual environment to increase the quality of instruction and combat preparedness, while at the same time reducing traditional training expenses associated with large-scale instruction facilities."

The simulator will use CryEngine 3 to create "a fully immersive environment with photorealistic graphics and technology that enable soldiers to virtually interact with their physical environment and to use combat equipment such as weapons, scopes and munitions." The press release said that the engine's detailed facial animation will be helpful in the simulation "because a blank, expressionless face has little training value and can actually introduce negative training."

Dismounted Soldier will involve the subjects wearing a full body suit. The helmets project a virtual reality type of situation to the user. The suit has sensors the users also use handheld weapon to make the simulation more realistic. You can check out some in-game footage from Dismounted Soldier in the trailer below.

Crytek launched CryEngine 3 earlier this year with the release of the sci-fi first person shooter Crysis 2. Later this year it will release a free version of CryEngine 3 for people to make free stand alone games with the engine or games that can be sold via a license agreement.