Dell's Latitude 5400 laptop isn't the sexiest PC around, coming in at 20.85mm thick and weighing in at 3.26 pounds. What it does do is get the job done. It comes with a 14-inch Full HD display, Whiskey Lake vPro processors, a solid keyboard, and more.

Moreover, it supports Dell's ExpressCharge. If you get it with the 90W, you can charge it up to 80% in an hour. This machine is a workhorse, and one thing that I found about it was that it's just dependable.

As I mentioned earlier, the Latitude 5400 isn't the thinnest or the lightest clamshell laptop around. It weighs in at just over three and a quarter pounds, despite using light materials. It's solid though, passing 16 MIL-STD-810G tests. That means that it can handle shocks, high altitudes, vibrations, sand and dust, extreme temperatures, and more. 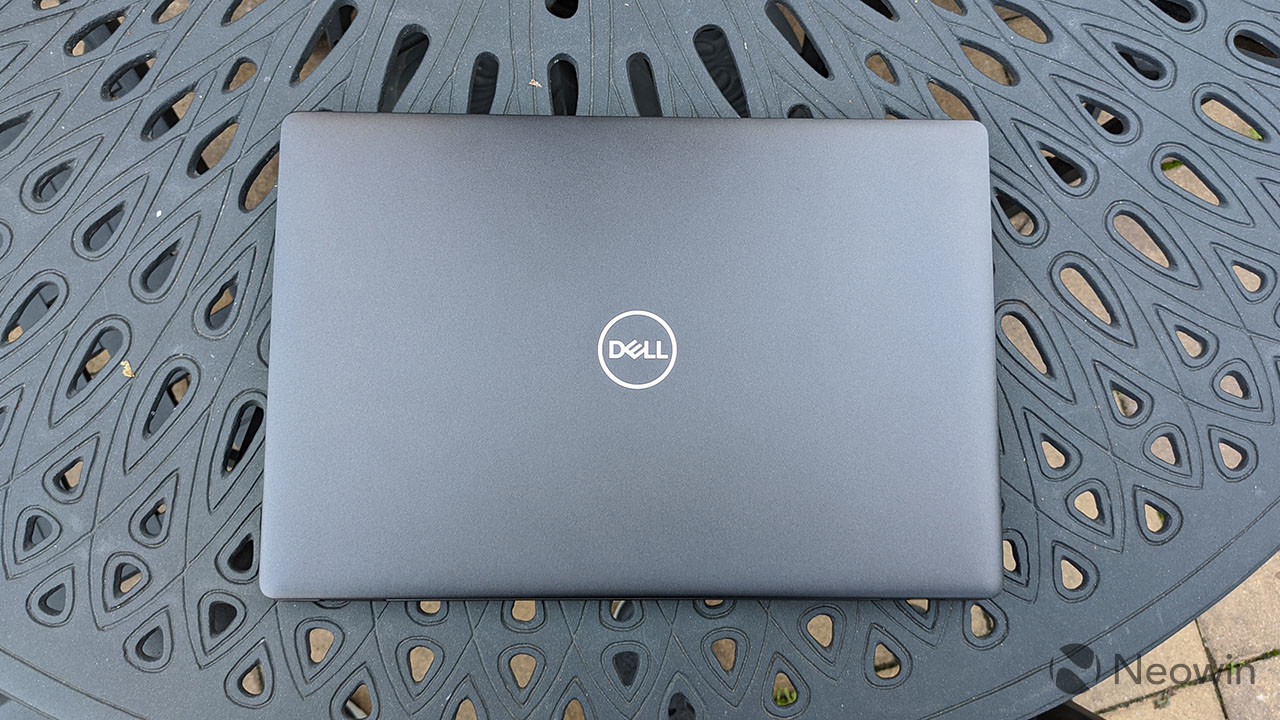 It comes in black and silver colors, and Dell sent me the black one. While it's not a particularly dark shade of black, it does look pretty stylish with the silver Dell logo stamped in the lid. 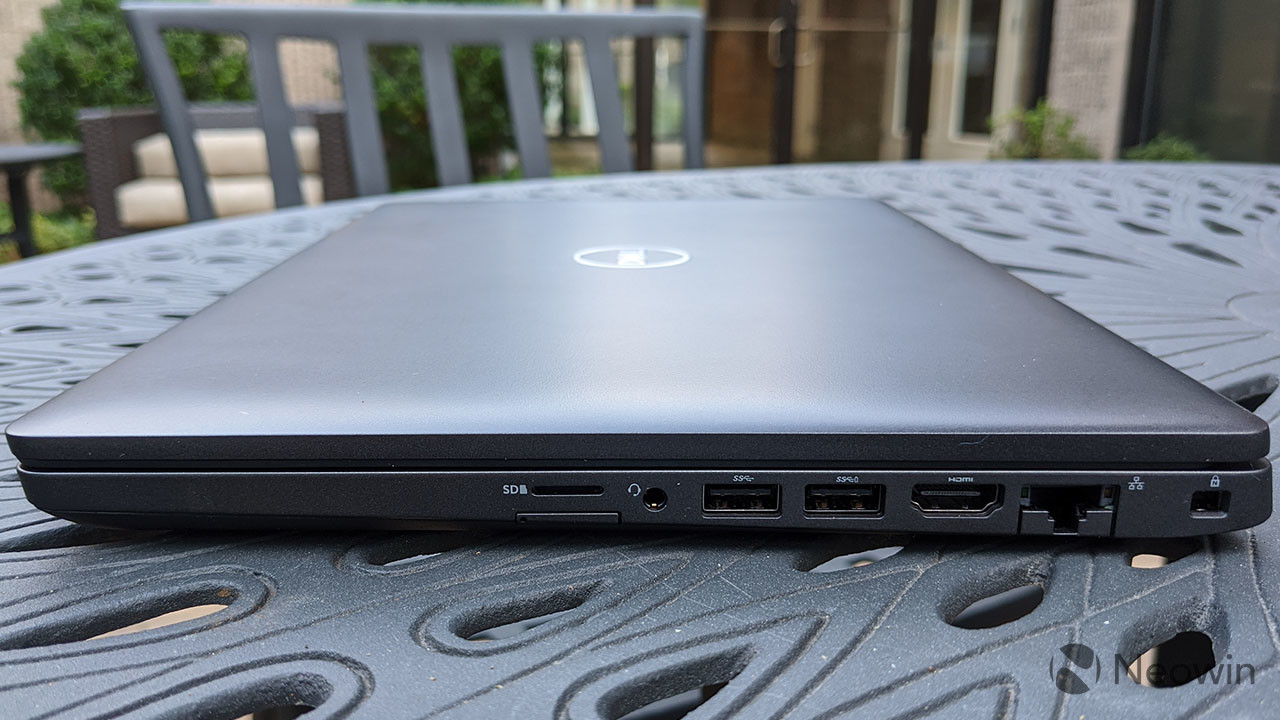 One thing that's nice is that there's no shortage of ports here. On the right side of the device, there are two USB 3.1 Gen 1 Type-A ports, HDMI 1.4, Ethernet, microSD, and a 3.5mm combo audio jack. There's also a nano-SIM card slot under the microSD slot, in case you get the cellular variant.

The Ethernet port has a drop-jaw hinge on it, presumably to save space in the chassis. Also, it's worth noting that HDMI 1.4 won't let you output to a 4K display at 60Hz, but luckily, there's a Thunderbolt 3 port for that. 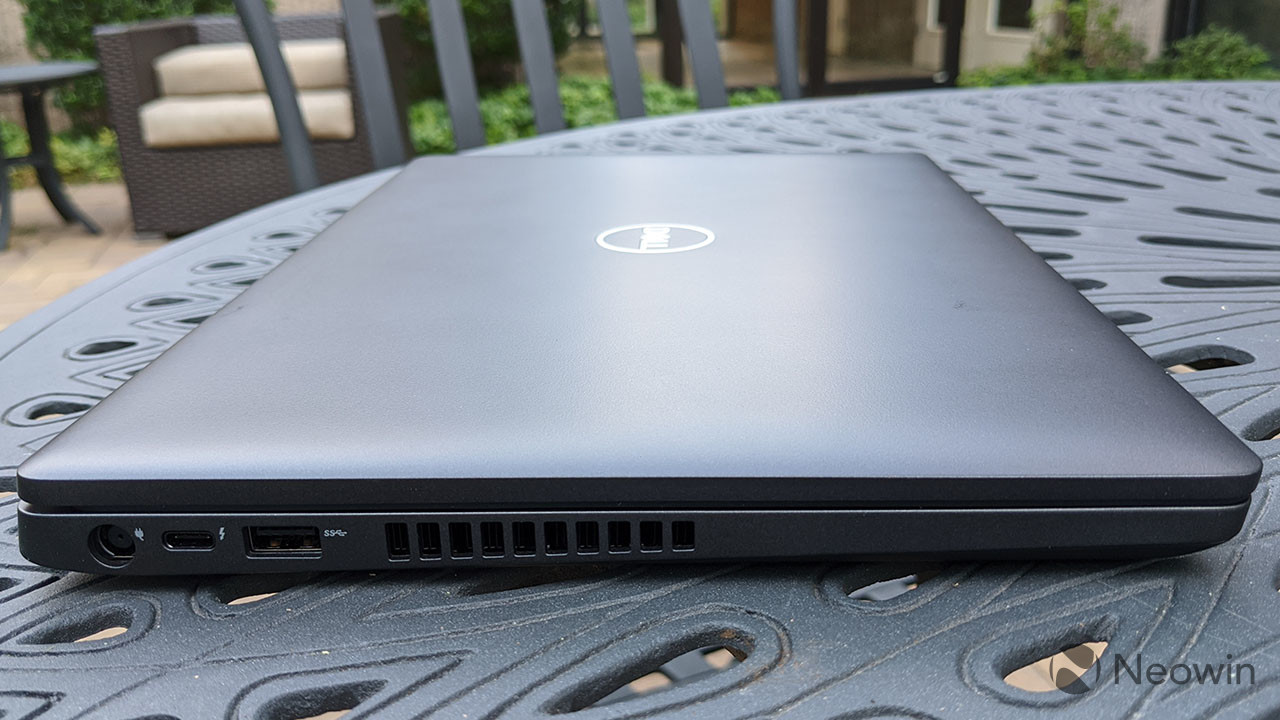 On the left side of the device, there's another USB 3.1 Gen 1 Type-A port, Thunderbolt 3, and a barrel charger port. The option for Thunderbolt 3 is nice given that this isn't in Dell's premium Latitude 7400 range. It could have swapped that out for a USB 3.1 Gen 2 Type-C port to save on costs for all models.

I'm against barrel chargers though. Sure, you can charge via the USB Type-C port, but the included charger is going to be a barrel charger, and that includes the 90W fast charger. Dell does make a 90W USB Type-C charger though if you want to get that separately. I guess the nice thing is that charging with the barrel port frees up the Thunderbolt 3 port, and two Thunderbolt 3 ports aren't something that you're going to see in a laptop in this class.

The Latitude 5400 does come with an option for AMD Radeon 540X graphics, which isn't particularly powerful but it's better than nothing. Of course, you can use that Thunderbolt 3 port for an external GPU, or for plugging in a 4K display. 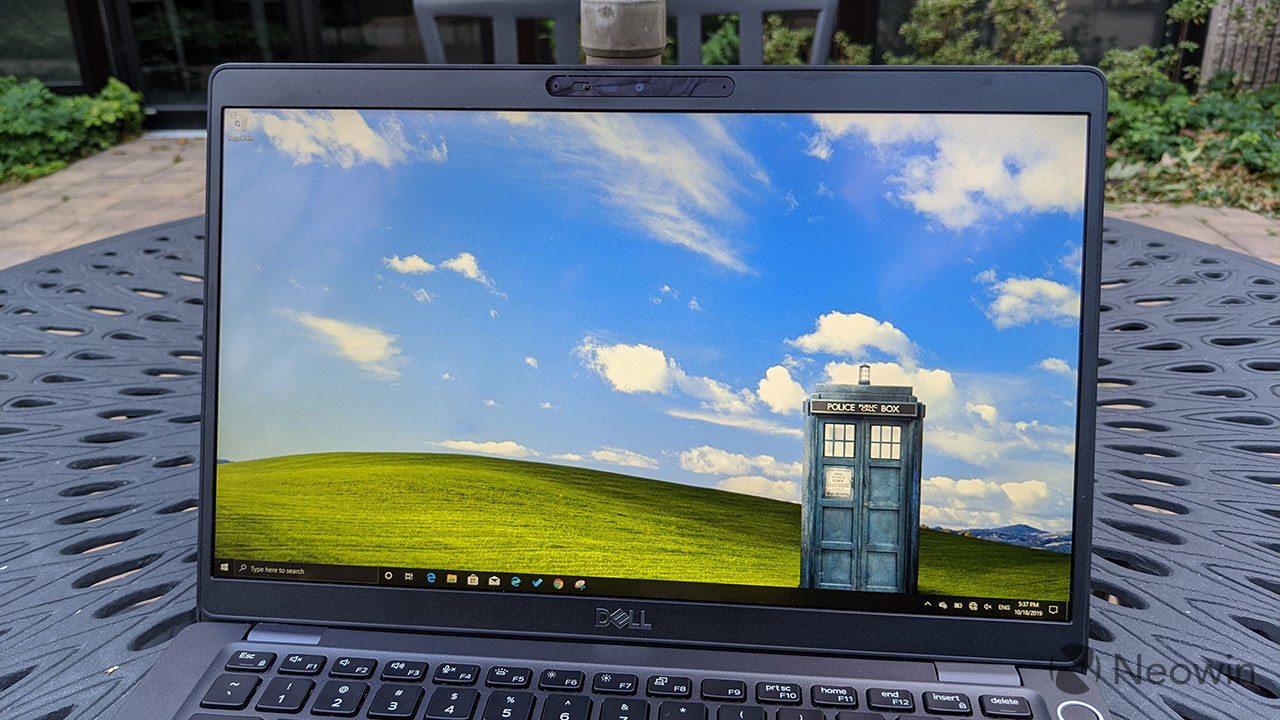 The screen is actually quite good. It's only 220 nits, but I didn't have any problems with outdoor usage. The anti-glare aspect of it really makes up for the apparent lack of brightness. Like I said in the beginning, I consider this PC to be something of a workhorse. It worked when I needed it to, and it just didn't give me any problems. The same goes for the display; wherever I was, it got the job done.

While it does support touch, there's no pen support, which is fine for a clamshell laptop. In fact, I think the non-touch option is probably fine. 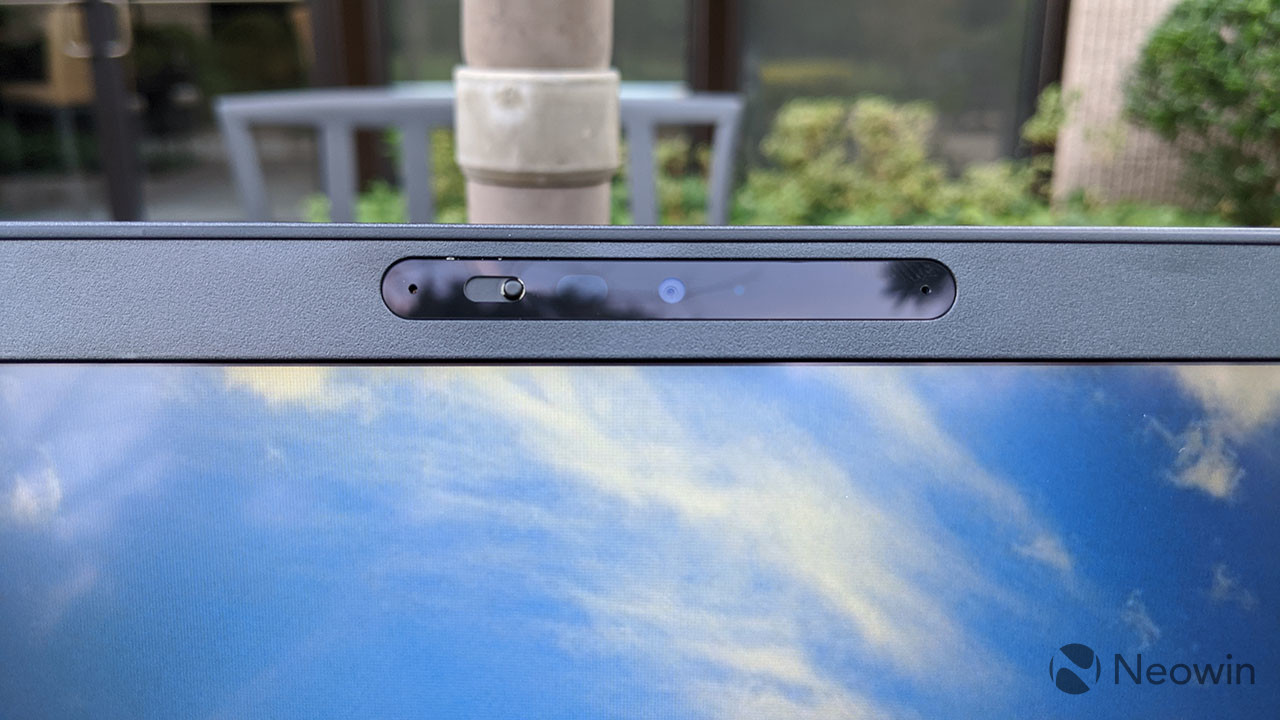 There are narrow bezels on the sides, although it has larger top and bottom bezels. On top, you'll find the webcam and an IR camera for Windows Hello. Obviously, facial recognition is a big plus, making logging into your PC nice and easy. There's also a privacy guard up there, with a switch that you can use to block the camera. There's no need to use a piece of tape anymore.

You'll just want to be aware of when the camera is blocked. Windows Hello requires both the IR camera and the webcam to work, so if it's blocked, you won't be able to use it to log in. You'll have to type a PIN, like a barbarian.

Audio quality is pretty good as well, or at least better than I expected for a PC where the spec sheet only said "High Quality Speakers". As is the case with many Dell PCs, they're tuned with Waves MaxxAudio Pro. The audio is clear, without any tinny sounds. Again, I wasn't expecting this with Dell not really promoting any real specs on the two speakers that are placed at the bottom of the chassis.

The word I'd use to describe the chiclet-style backlit keyboard is solid. It's accurate and mostly comfortable, and it's one of the better ones that I've used on a mainstream PC. You'll still do better with a Lenovo ThinkPad T-series, but Dell puts together a great all-around package here. 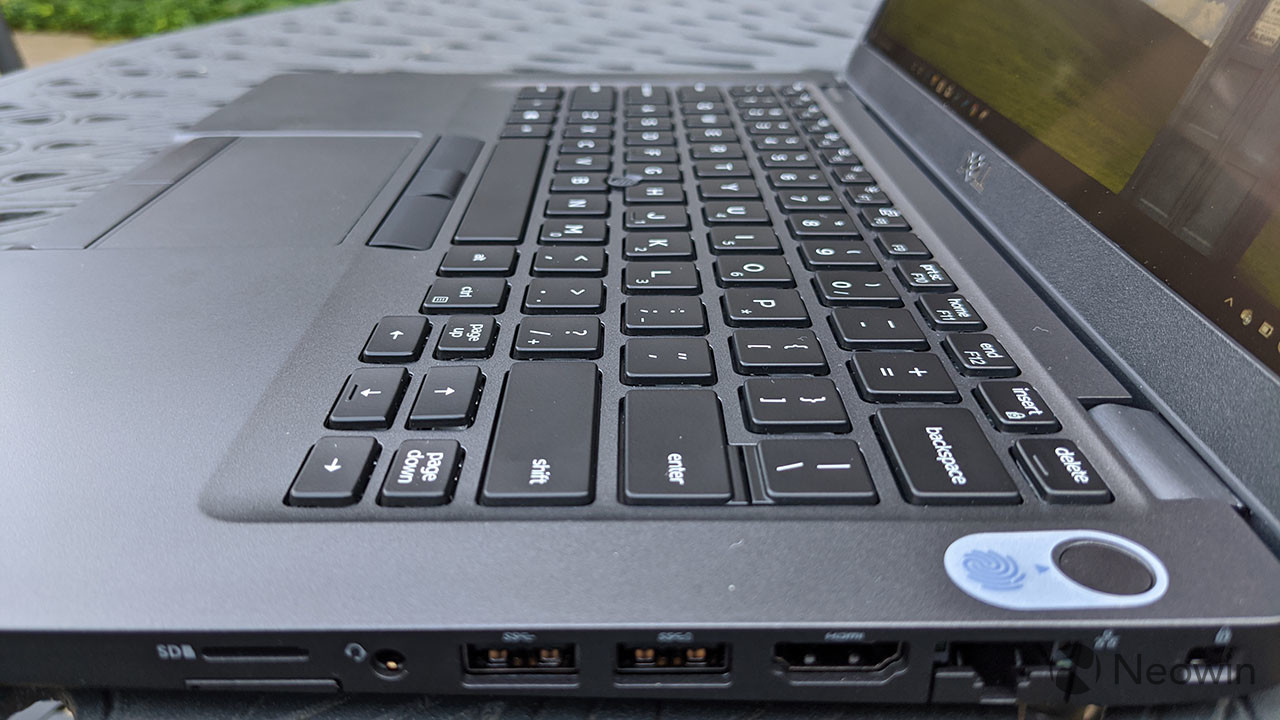 You can see from the image above is that the key depth isn't too long, and that's a trend that we're seeing across the board. Keyboards are just getting shallower. Luckily, it has the proper resistance to still be comfortable. The first thing I said about it was that it's accurate though. Wherever I went with it, and whether it was resting on my lap or on a desk, I didn't wish I had another laptop to type on.

Dell includes a TrackStick between the G, H, and B keys. Obviously, you can use this to control the pointer, and you can click with the physical buttons above the trackpad. This is a feature that's a staple on Lenovo's ThinkPads, and it's also included in HP's mainstream EliteBooks. 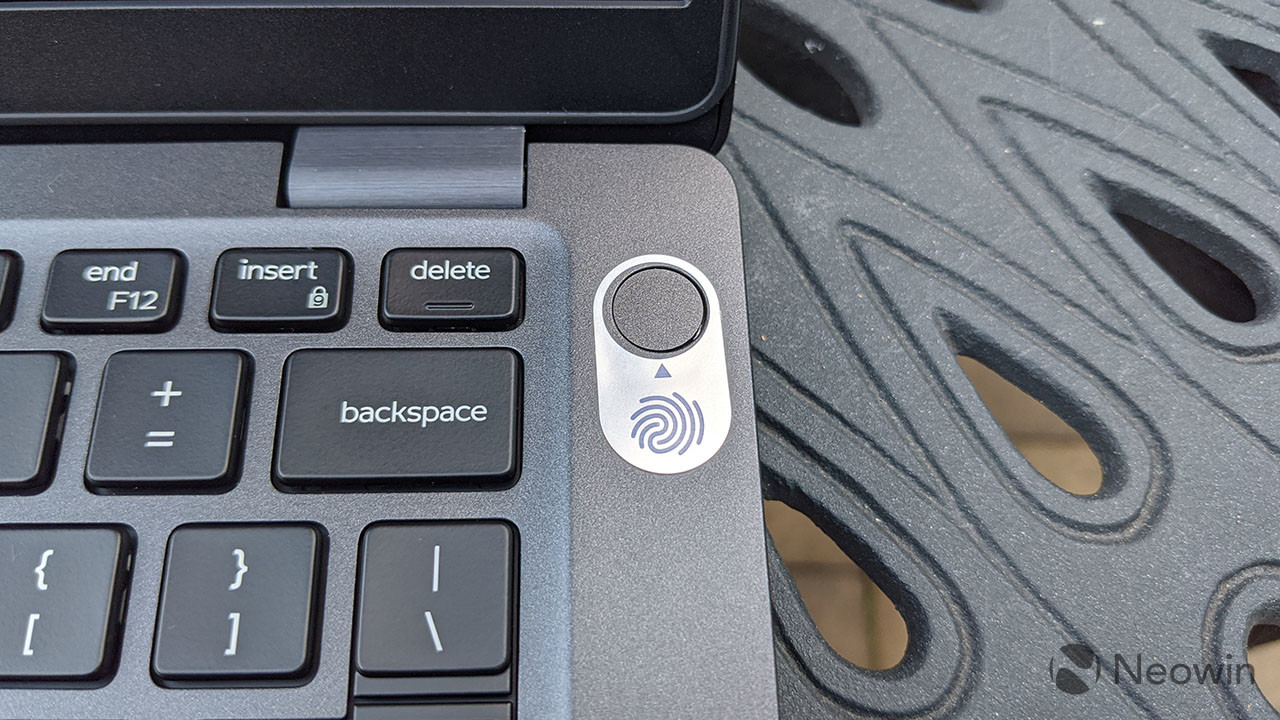 Unfortunately, Dell PCs don't scan your fingerprint when you press the power button. You have to press it again when you're at the lock screen. Other PCs - from companies like Huawei, LG, and Lenovo - will automatically log you in. Dell considers this to be a security risk, with the idea in mind that you might walk away from your PC at some point between when you press the button and it boots up. 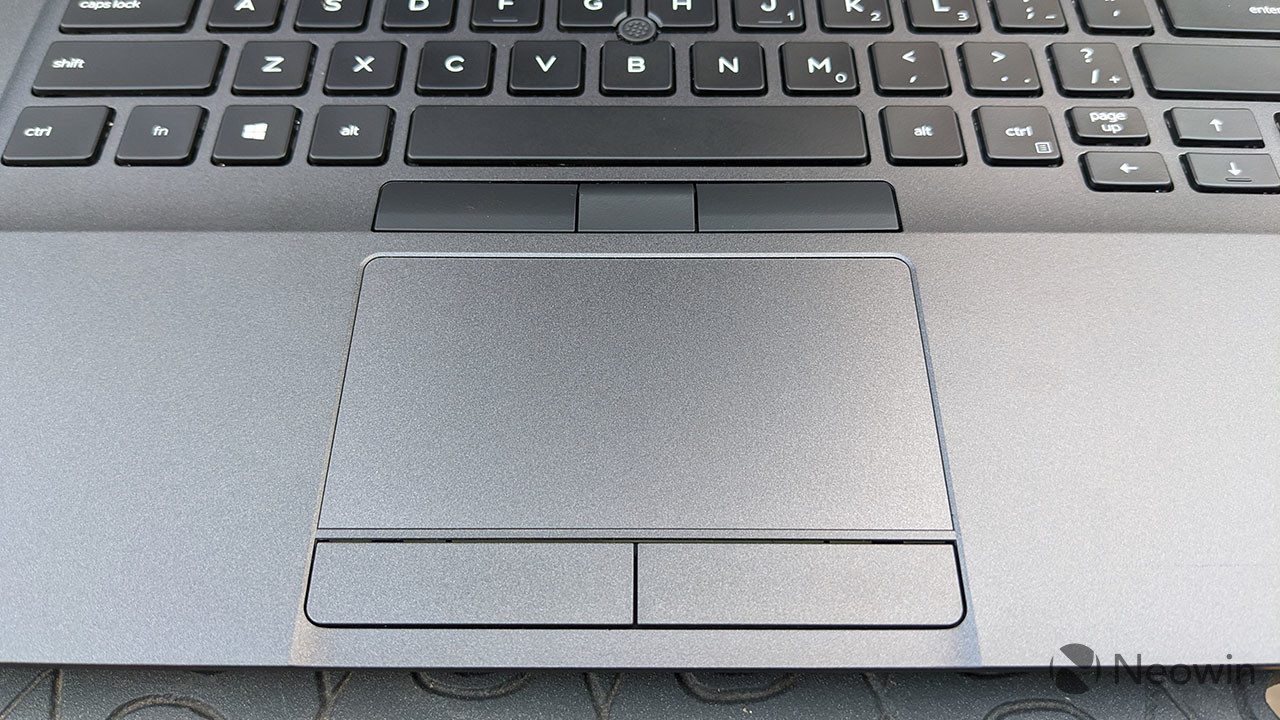 The Latitude 5400 has a Microsoft Precision trackpad, so the performance is great and it supports all of the gestures that you're used to. It's not clickable, although this is something that I had an oddly easy time getting used to. That's because it has physical buttons both above and below the trackpad, with the top ones obviously meant for use with the TrackStick. I always appreciate physical buttons because they can make it easier for drag-and-drop operations.

The model that Dell sent me includes an Intel Core i5-8365U and 8GB RAM. The CPU is from the Whiskey Lake vPro family, as opposed to the non-vPro Core i5-8265U. It's a 15W CPU with four cores and eight threads. Naturally, you can have it configured with up to a Core i7-8665U.

There's also an option for AMD Radeon 540X graphics, which can give you a boost if you need it for more creative tasks. Note that this option is only available in the Latitude 5400 and 5500, not the 5300, and it wasn't included in the model that Dell sent me. 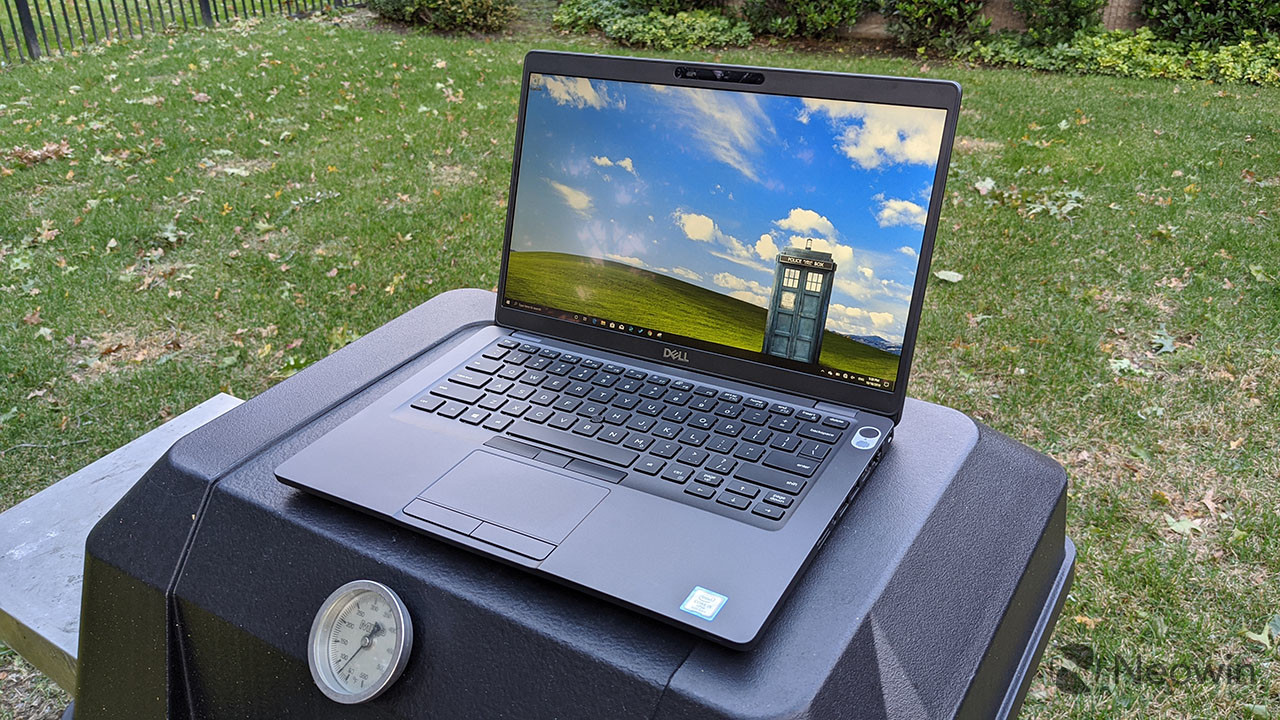 But performance was great. Again, in any situation that I put it in, the Latitude 5400 performed. The Core i5-8365U is mostly good for productivity tasks. You can use it for video editing if you need to, but if that's your primary task, you'll want to go with something a little beefier, or at least get the dedicated GPU option.

Battery life is pretty great as well. I got seven hours while streaming YouTube TV, and it was about the same with normal work. For example, I took it with me to last week's Google event, and I used it throughout the day with no problem. Obviously, you can get a quick charge with the 90W charger if you need to as well.

For benchmarks, I used PCMark 8 and PCMark 10. PCMark 8 provides three tests: Home, Creative, and Work. The Home test checks common tasks like video chat, web browsing, and casual gaming. The Creative test is for GPU-intensive tasks like video editing and mainstream gaming. And the Work test is for productivity-related tasks like writing and spreadsheets. Finally, PCMark 10 has an all-in-one test.

The benchmark scores are quite good, especially on the Work test, and they reflect my real-world usage. For example, the new Dell XPS 13 2-in-1 got 3,723 on that test, and that machine has an Intel Core i7-1065G7, a 10th-generation CPU with Iris Plus Graphics. Of course, the XPS 13 2-in-1 did much better on the more graphics-intensive Creative test.

The Dell Latitude 5400 is a great all-around laptop. It checks all of the right boxes. It's just not sexy. It's not super-thin, it's not super-light, it doesn't come in flashy colors, and no one is going to ask you what laptop you're using while you're working on it at Starbucks. 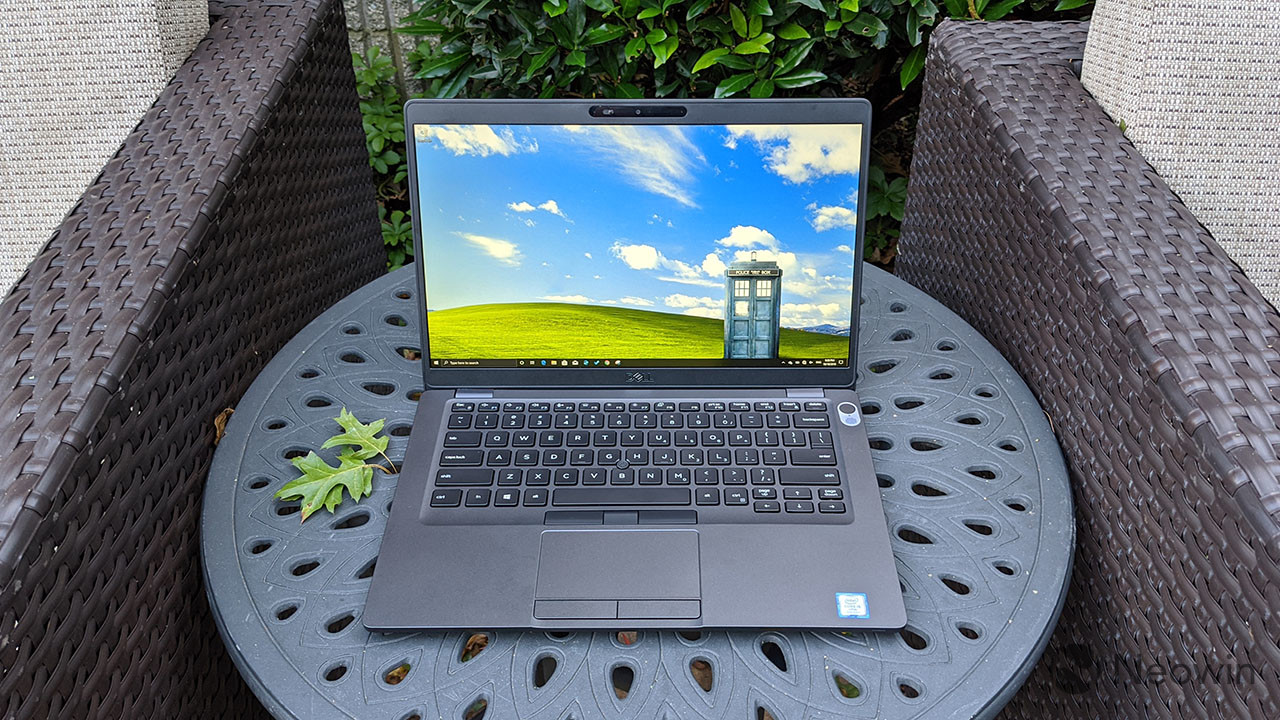 But the good far outweighs any of that. It has incredible performance for a Core i5-8365U and 8GB RAM. The anti-glare display is phenomenal, and it has a solid keyboard and trackpad. I've said it a few times, but this machine is a workhorse. It's something that you can count on when you need it, and that's not something that I say a lot.

The configuration that Dell sent me costs $1,625.40, although it starts at $819. I think that this is a PC that you can feel comfortable about handing out to a team of employees. Like I said, it just won't let you down. 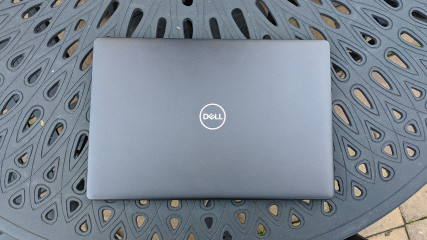 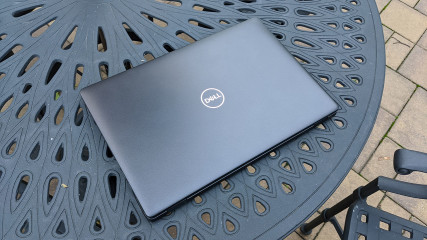 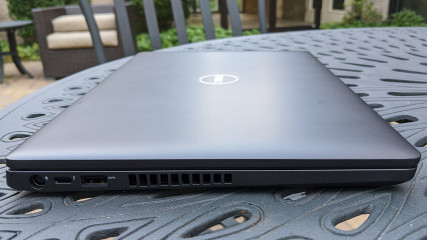 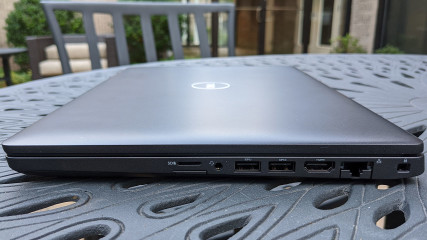 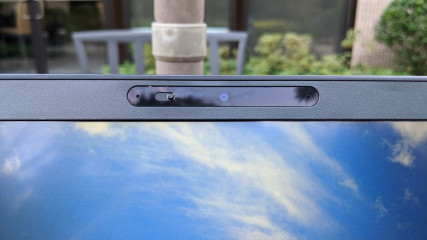 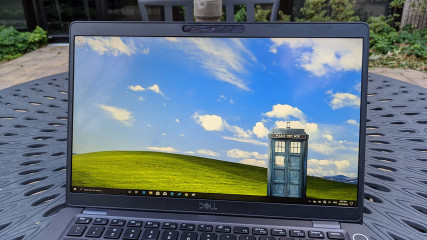 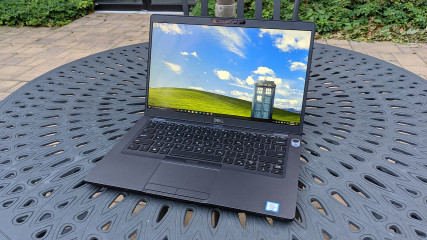 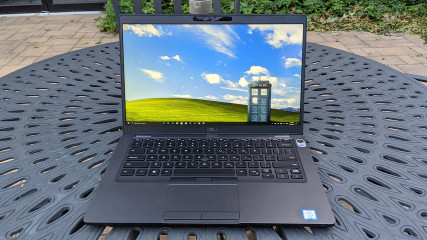 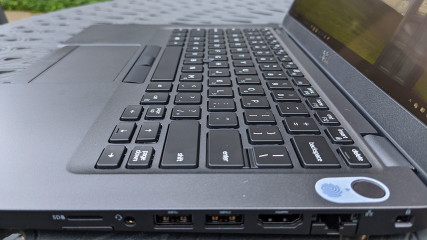 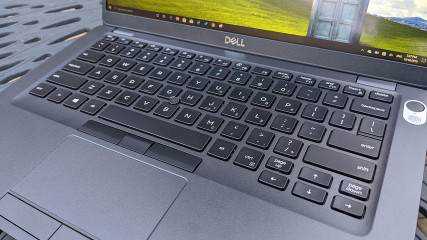 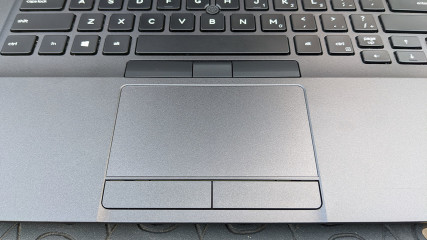 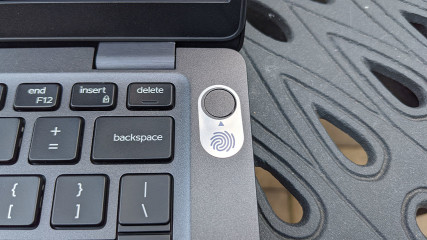 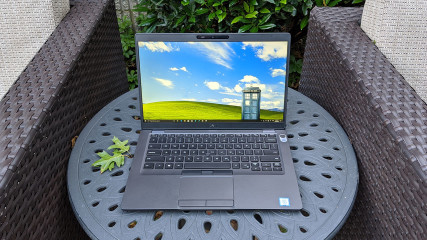 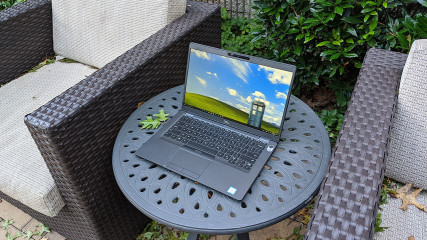 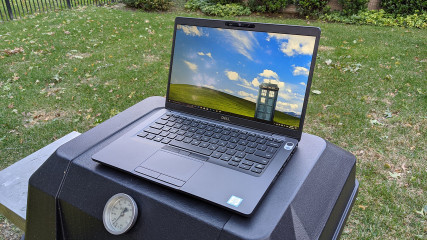 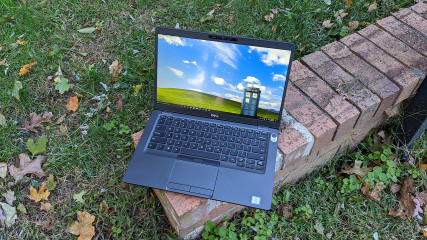