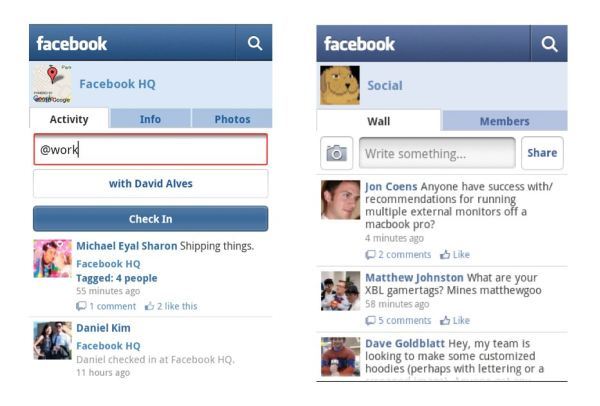 After much fanfare and speculation, a mobile event at Facebook's Palo Alto headquarters has come and gone - and there's no Facebook phone.

Instead, the company has unveiled an updated Android app, after admitting it had typically been left behind in comparison to Facebook's iPhone application. Version 1.4 of the Facebook Android app adds Places and Groups and makes improvements to notifications. Facebook launched the latest iteration of its Groups feature, designed to let people share content and information privately with small groups of friends, last month.

In an interesting aside, CEO Mark Zuckerberg said Facebook was set to outsource development of their Android app to an unnamed firm, only to have Google purchase the company.

Facebook's iPhone app also got a version bump to 3.3 and also gained a Groups feature, as well as a new feature dubbed Deals.

Deals leverages the existing Places feature, which allows users to ''check-in'' and share their location, and lets businesses put up special deals which will be offered to nearby Facebookers via the iPhone app and touch.facebook.com.

According to Facebook product marketing team principal Jon Fougner, there will be different types of deals available.

''Individual deals for a discount, free merchandise or other reward; friend deals where you and your friends claim an offer together; loyalty deals for being a frequent visitor to a place; and charity deals where businesses pledge to donate to a cause when you check in,'' he said.

Deals are only available in the US for the time being.

Writing on the official Facebook blog, head of mobile products and ex-Googler Erick Tseng explained how single sign on works.

Mr Tseng also revealed that 200 million people around the world are now actively using Facebook from a phone, more than triple the number just one year ago.

And in a barb that is sure to ruffle feathers at Apple, Engadget has reported that Mr Zuckerberg dismissed the possibility of a Facebook iPad app, saying the tablet device was not mobile.

''It's a computer. Sorry,'' Mr Zuckerberg told reporters when pushed on his views about Apple's tablet.