Earlier today Sony introduced the Vaio Duo 11, a laptop/tablet hybrid with Windows 8 that's made to give you the best of simply all worlds.

When collapsed the Vaio Duo 11 seems just like any regular 11" Windows 8 tablet but it actually has a lot more. Sony's picked a very high quality 1920x1080-panel with excellent viewing angles (so probably IPS) for the display. The result is an extremely crisp image with deep contrast and good brightness. 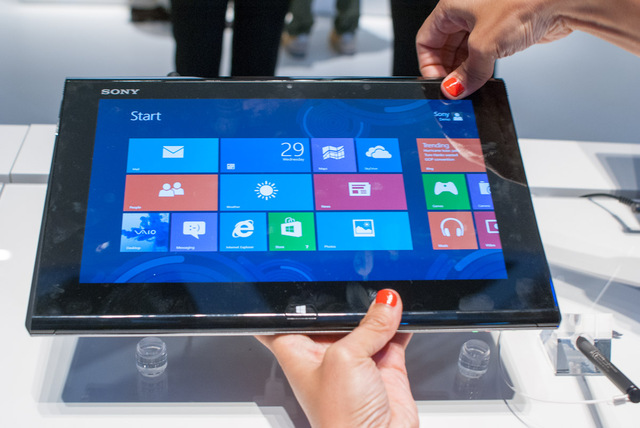 In contrary to what was believed to be the case (due to the leaked documents), Sony has decided to use a very good Wacom pressure sensitive digitizer for the stylus. I've tried one of the apps to take notes that came with it and it worked remarkably well. Since you could just rest your hand on the display as you would with a real paper notebook writing feels incredibly natural. The digitizer reacts almost instantly and the pressure sensitivity makes it look incredibly real. The stylus has two buttons, one of which is used to switch between input modes.

I've also tried OneNote 2010 on the hybrid and it worked pretty well. With all the new improvements for touch in Office 2013, the next version of OneNote should work perfectly without any issues. While we're talking software, the whole system seemed to be relatively bloatware-free. 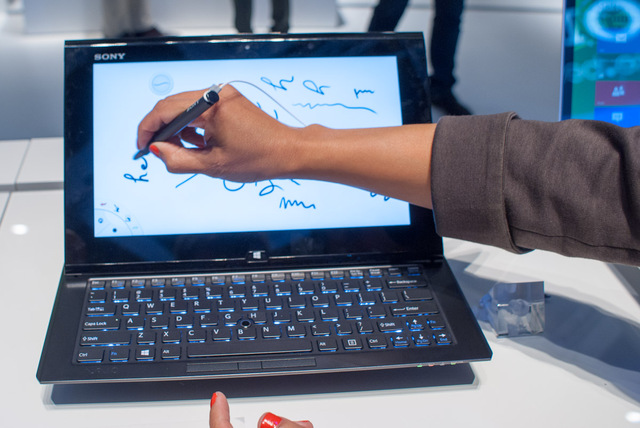 When using it in the extended mode with keyboard things change pretty drastically. Having had the chance to properly play with Windows 8 I sort of expect that if you have a touch screen available you will probably just use it. The keyboard on this laptop only really functions as a pure text input device, similar to using an external keyboard for the iPad. Because of the switching mechanism the keyboard had to be placed as low as possible on the base, removing any possible room for a touch pad. To counter the complete lack of a mouse Sony included an optical track-point in the center of the keyboard, but since it doesn't react very well I suspect not many people will be using it.

The keys on the keyboard itself are on the small side, but they type quite comfortably. If you're used to a chiclet keyboard you won't have a hard time with this one. As it should be in this day and age the keyboard has a backlight that switches itself on when needed (using an ambient light sensor).

The switching mechanism itself seems to be quite sturdy and the whole product felt quite solid in any situation. On the inside the device is powered by a regular Intel Core i5, making you able to run all non-Modern software you want/need. Because of the impressive specifications, sturdy body and hybrid mechanism the weight of the device is quite a bit above what you're used to for a tablet, but holding it with one hand should still be possible without getting uncomfortable too soon. On the connectivity side you have a bunch of USB3 ports, HDMI and good old VGA for those company projectors that only have VGA.

My overall opinion of this product is quite positive. It'll probably cost quite a bit of money, but for that price you get one of the most versatile and high-quality products you'll be able to get with Windows 8 (other than Microsoft's own Surface device). In fact, while I wasn't a fan of Windows 8 before these Windows 8-optimized products made me realize that it really isn't all that bad, especially not on a tablet.

Keep your eyes on our front page for the next few days as we'll be posting more hands-on experiences and pictures straight from IFA, including Samsung's new ATIV hybrid tablets and Sony's 20" tablet prototype.