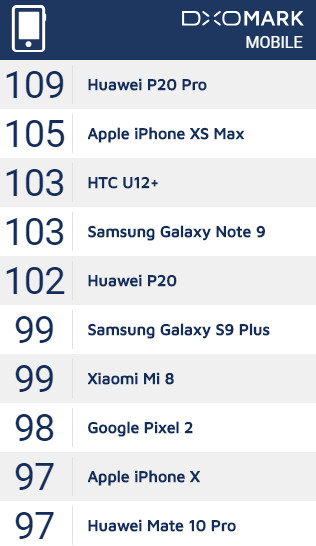 The iPhone Xs and Xs Max certainly boast significant improvements over their predecessor in the camera department with their Smart HDR feature that's supposed to help produce a good exposure under almost every circumstance. However, benchmarking site DxOMark ranked the iPhone Xs Max second to the Huawei P20 Pro in terms of overall camera performance.

For the test, DxOMark factored in all aspects of the camera including the exposure, contrast, autofocus, flash, noise, zoom, artifacts, and depth of field (bokeh). While the benchmarking site described the phone's camera as "one of the best mobile cameras" it has tested, DxOMark gave the device an overall score of 105, trailing behind the P20 Pro which has the highest score of 109.

The test revealed a few weak spots in the iPhone Xs Max's camera such as its zoom performance, which DxOMark said produced "coarse luminance noise and less detail" compared to its Huawei counterpart and even Samsung's Galaxy Note9. Flash is also one of the phone's weak points due to underexposed shots, though it's nothing new.

Other problems raised by the site involve the depth of field for some visible depth miscalculations. Nonetheless, the iPhone Xs Max's bokeh effect is still seen as better than the iPhone X's. And with Apple planning to let users of the iPhone Xs range control its depth of field while taking a photo instead of after capturing it, the handset's camera may gain some more improvements in the future.