If you are one of those people who reads more than 5 books per year then a Kindle is definitely for you. According to a report by the Cleantech Group, the Kindle is more environmentally friendly than paper books.

The publishing industry is one of the most polluting sectors in the world. In 2008, The U.S. Book and newspaper industries combined resulted in the harvesting of 125 million trees.

The report by the Cleantech Group, titled "The Environmental Impact of Amazon's Kindle" looks at the emissions that devices could produce and prevent. According to the report, a single Kindle displaces the purchase of 22.5 books each year which results in an estimated carbon savings of 168 kg of CO2. It also says that if the full storage of the Kindle is used then the device prevents almost 11,185 kg of CO2 from being released. That is a significant amount and could help the environment drastically especially with sales of the Kindle expecting to touch 14.4 million in 2012. 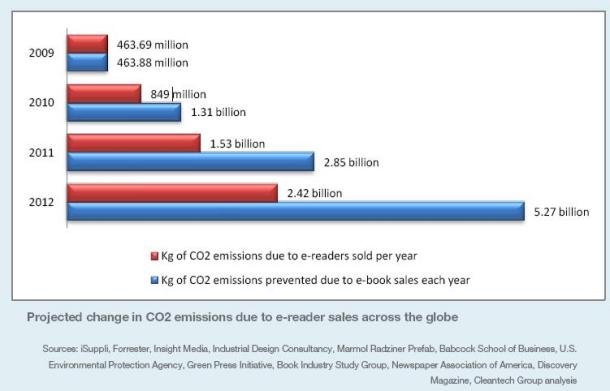 The Cleantech Group also forecasts that e-readers purchased from 2009 to 2012 could prevent an estimated 5.3 billion kg of carbon dioxide in 2012 or 9.9 billion kg during the four year time period.

According to the study done by Emma Rich, the Amazon Kindle still has a significant edge when taking into account the manufacture and mining required to produce an electronic device.

This is what Emma Rich had to say in her conclusion; "The roughly 168 kg of CO2 produced throughout the Kindle's lifecycle is a clear winner against the potential savings: 1,074 kg of CO2 if replacing three books a month for four years; and up to 26,098 kg of CO2 when used to the fullest capacity of the Kindle DX. Less-frequent readers attracted by decreasing prices still can break even at 22.5 books over the life of the device,"

They also noted that the production of a Kindle produces 168 kg of C02 compared to 7.46 kg of CO2 for a book. They say this citing sources that electronic readers need electricity to run.

They argue that the electronic reader industry can only make a significant impact once people start mass movements from paper media. "A user that purchasers fewer than 22.5 books per year would take longer to neutralize the emissions resulting from the e-reader, and even longer to help reduce emissions attributed to the publishing industry," according to the study.

It comes down to whether people continue to buy books or print papers along with an e-book. The question then is; Are you going to buy an e-book? If so, will you purchase more than 22.5 books per year?