In June, Microsoft launched a major operation to go after over 1,400 Citadel botnets centers that were being used by criminal groups. This week, the company revealed that so far, about 88 percent of the botnet's servers have been disrupted.

In addition, our analysis shows that approximately 40 percent of the computers we believe to have been infected with Citadel and directly impacted by our operation have been cleaned since the time of our action in June, and we continue to work with others to help clean the remaining victims.

At the time of the raid, Microsoft claimed the botnet had caused over $500 million in losses for individuals and businesses before the company, in cooperation with the FBI and US Marshals, launch their raids on its command centers. 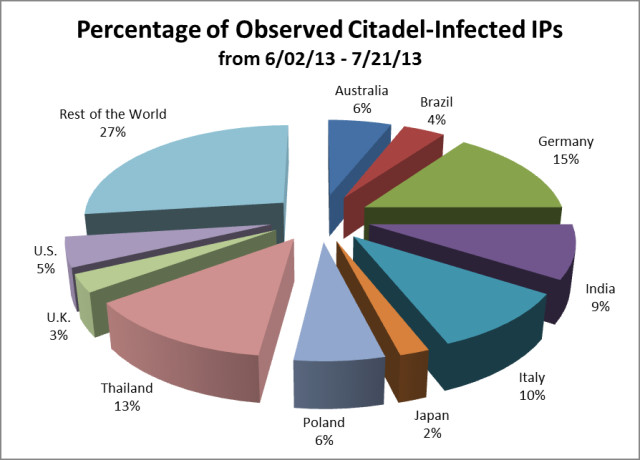 The blog also posted up two charts showing the percentage of countries in the world with Citadel-infected IPs, including one before the raid and another, shown above, that shows the percentages after the raid. Germany has the highest percentage at 15 percent, followed by Thailand at 13 percent and Italy at 10 percent; the US only takes up five percent of the currently infected Citadel IPs.