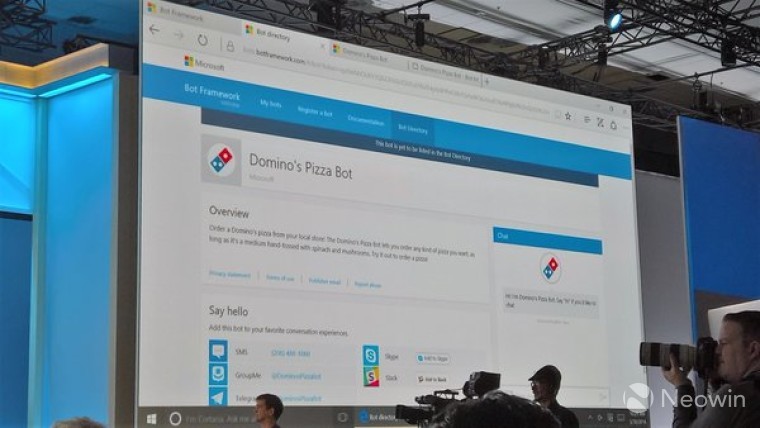 Microsoft is getting wrapping up its big keynote for its annual developer conference Build, but there's still more news coming. The firm has announced the Bot Framework.

The Bot Framework is a platform for building - you guessed it - bots. It was shown off by ordering a pizza from Domino's, and just in case you thought it might have been all for show, Domino's confirmed the order.

Your ? order has been received, @Microsoft! We’re getting started on it now! #Build2016 pic.twitter.com/MoUdEi9i7K

The Bot Framework can use C# or Node.js; however, demos were in C#. While the ordering of the pizza was a simple /order command, they also demoed the ability to create a more thorough conversation.

According to Microsoft, a more thorough conversation could go something like, "can you deliver 3 pepperoni pizza to my crib" or "grab me a big pizza with pepperoni and dbl cheese, will you?" Common synonyms can expand the vocabulary of these bots.

It's clear that Microsoft has big ambitions for artificial intelligence. According to the firm, various third parties are already on board with the new Bot Network.