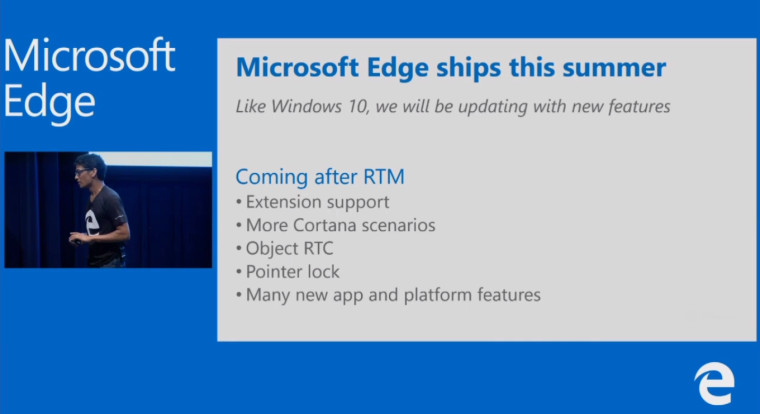 Microsoft is working on a new browser called Edge and when it arrives with Windows 10 this summer, it will not be feature-complete. That's not a huge surprise as the browser, under the hood, is a massive re-working of the Trident engine; development started in the second half of last year.

While the version that ships this Summer will have lots of features and improvements over Internet Explorer, at some point, the team has to draw a line in the sand and say 'here is what will not be included' when the browser ships.

At its Edge Web Summit in California, the development team behind the browser has, at a high level, outlined the features that will be arriving later this year after the browser is released.

As the team already said, extensions will arrive after RTM but also coming down the pipe are new scenarios for Cortana, Object RTC, and Pointer Lock; the slide ends with the ambiguous "Many new app and platform features" too.

The new Cortana features will relate to contextual situations like flights, sporting events/scores, and other similar scenarios.

The team is likely working on many more features but they are not ready to announce them yet as they have a lot on their plate ahead of RTM. As the team starts opening up about what Edge will include down the road, we will keep you updated.