In what could be considered a late Christmas miracle, Microsoft has begun to offer free display docks to Lumia 950 and Lumia 950 XL owners in Australia. This has come after nearly two months of silence from Microsoft, who made similar announcements in several markets including the US, Canada and India. 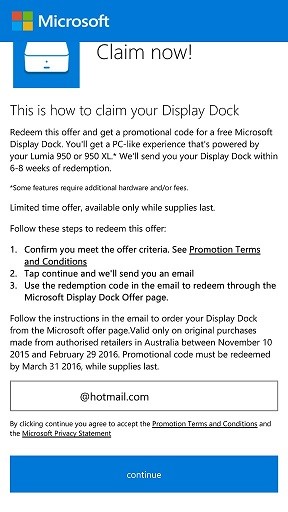 The offer is available for Lumia 950 or Lumia 950 XL handsets bought in Australia between November 10, 2015 and February 29, 2016, which covers owners who bought before the announcement, as well as new buyers. Promotional codes must be redeemed before March 31, 2016 while supplies last. The offer can be claimed via the Lumia Offers app in Windows 10 Mobile.

Microsoft notes that docks will be sent within six to eight weeks of redemption, which puts those who redeem the offer today likely to receive their display docks towards the end of February 2016 at the latest.

Once received, the display dock will allow Lumia 950 and Lumia 950 XL owners to connect their smartphone to a keyboard, mouse and external display. This will enable a "desktop-like" experience mimicking a Windows 10 desktop with universal Windows apps. However, it stops short of offering a full blown desktop experience with Win32 apps which could be made possible if a rumoured Surface Phone with Intel CPU sees the light of day.