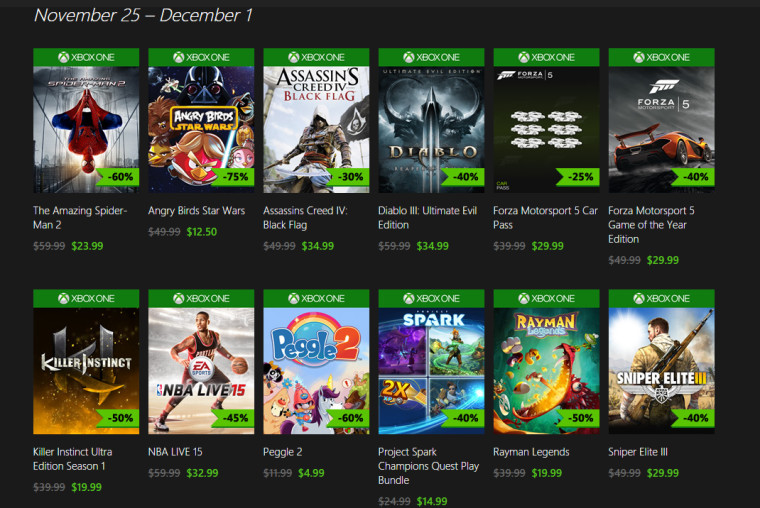 Microsoft is kicking off the Black Friday sales in a big way, as the company has just unveiled some massive discounts for games, consoles and accessories. While the Xbox One console promotions aren’t news, starting today users will also be getting some sweet deals for games.

Microsoft just launched the website dedicated to Black Friday deals and users will no doubt rejoice as lots of premium games have had their prices slashed. Starting today, users can purchase games such as Assassin’s Creed Black Flag, or Diablo 3 for only $35 while other titles like Sniper Elite III and Forza Motorsport 5 go for even less.

And that’s not all, as numerous premium titles will go on sale on Thanksgiving. These are FIFA 15, Sunset Overdrive and Call of Duty: Advanced Warfare, with each title going for only $14.99 some titles going as low as $14.99 while other will see further discounts. The current promotions will last until December 1st so you have plenty of time to get your favorite game on the cheap.

The company’s website also lists retailers and stores that are holding other promotions for consoles, accessories and games. And we may see further discounts during the weekend as Xbox head Phil Spencer hinted players should keep a close eye on the Xbox Store.

Update: Sorry folks looks like our enthusiasm was a bit pre-mature. The article was changed to reflect that not all premium titles mentioned would be priced at $15. Some start at that price but each game has it's own promotional price which may be considerably higher.