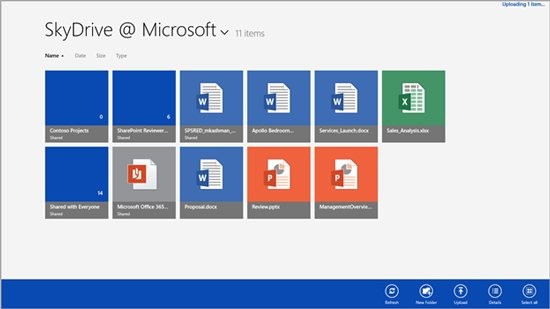 Microsoft's Office blog has download links ready for both the Windows 8 and iOS SkyDrive Pro apps, both of which are made specifically to upload, view and access SkyDrive files for Office 365 users that also have SharePoint. The blog states:

You can use the SkyDrive Pro apps to view documents in your SkyDrive Pro folder, select specific content to take offline when you are traveling or have low bandwidth, organize your content by creating new folders, and upload new content and share with others.

Microsoft has big future plans for SkyDrive, as we reported earlier this week from the BUILD 2013 conference. With the upcoming launch of Windows 8.1, Microsoft will integrate SkyDrive more deeply into the OS including making SkyDrive the default file storage location for Office documents. It will also automatically sync the file and folder structure of a user's online account for Windows 8.1.