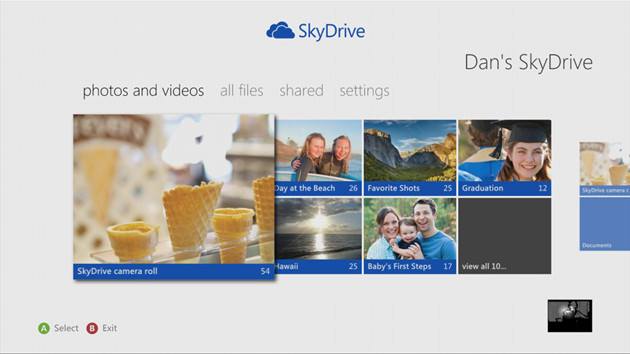 In December, Microsoft gave Xbox 360 owners a new and somewhat unexpected addition to its app lineup: SkyDrive. The app allows users to view their photos and videos stored on the cloud data service on their big screen TV and even supports the console's Kinect add-on.

Microsoft showed off a number of apps that will be a part of the upcoming Xbox One console during its press release on Tuesday, including Skype, Netflix, Internet Explorer and HBOGO. One app that strangely didn't show up in the Xbox One presentation was SkyDrive.

Neowin contacted Microsoft to see if a SkyDrive app was in the works for the new console, but unfortunately the company's response was non-committal, with a spokesperson saying only, "We'll have more to share on this at a later time."

Hopefully this means that the company simply doesn't want to comment yet about the SkyDrive support. Microsoft's push to add cloud features to Xbox One is pretty evident and it would seem to be a no-brainer to include an official SkyDrive app for the console's users.

Microsoft does seem to be keeping quiet a few things close to its vest about the Xbox One, including how the console will support used disc games. It may be waiting until its E3 2013 press conference June 10th to reveal a lot more about its strategies for the console.