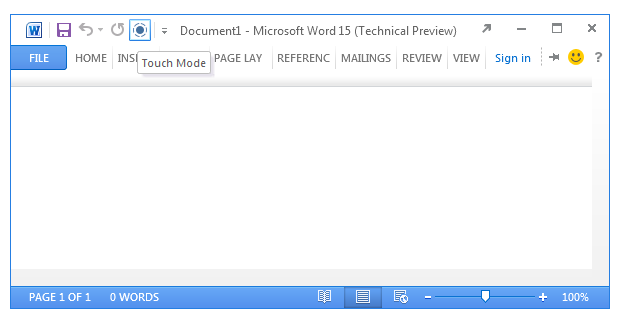 Microsoft Office 15 is expected to be released around the same time the commercial version of Windows 8 is launched, which is sometime late in 2012. In January, Microsoft announced it was releasing what it called a "technical preview" of Office 15 to select developers. While those developers are supposed to be using the preview version under NDAs, some details of Office 15, along with some screenshots, have leaked out to the Internet.

ZDNet.com reports that Office 15 will have what's being called a "touch mode" button for its many apps. While the actual button doesn't work in the technical preview, it appears to be put in place to allow Office 15 users to freely switch between a touch screen mode for the apps and going back to a classic keyboard-and-mouse control scheme.

The technical preview of Office 15 looks just like it is supposed to be; a preview with not all of the features or UI elements in place yet. The first public beta release of Office 15 is expected to be offered by Microsoft sometime this summer.