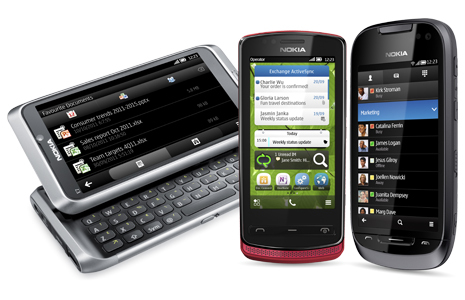 Nokia and Microsoft have a very tight relationship. That's evident in the Windows Phone-based Lumia devices that Nokia is currently selling. Now even owners of non-Windows Phone Nokia products can get some Microsoft software products inside. In a post on Nokia's official blog, the company announced that owners of some smartphones running on Nokia Belle (formerly Symbian) can now download a number of Microsoft Office apps.

Specifically, a new automatic software update will add those Microsoft Office apps to the following devices: the Nokia E7, the Nokia C7, the Nokia C6-01, the Nokia X7, the Nokia Oro, the Nokia 700, the Nokia 701, and the Nokia 603.  The Nokia N8, Nokia E6 and Nokia 500 smartphones will get the same update at a unnamed later date.

The actual apps that will be released for those smartphones are Microsoft OneNote, Microsoft Document Connection, Microsoft Lync 2010 Mobile and Microsoft PowerPoint Broadcast.  Nokia is also promising even more apps in the Microsoft Office family will be added for Nokia Belle owners in the near future. The blog states:

For the first time ever, Microsoft Word, Excel and PowerPoint will be made available as native applications in a smartphone, outside Microsoft’s own platforms.