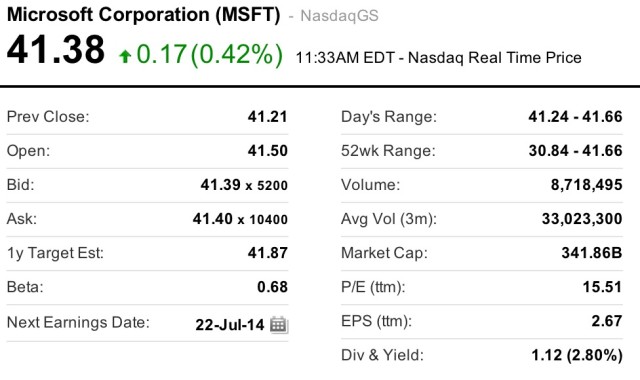 The stock market is a finicky beast. While daily movements in share price often defy conventional logic, broader trends are generally representative of the confidence that the markets have in an organization. With that in mind, Microsoft's stock has hit a 52-week high today at $41.66, suggesting that Wall Street appears to approve of Nadella's direction for the company.

Sure, we know that most of what Nadella has released has been a carry-over from the Ballmer era and that Satya is still crafting his strategy but he also deserves some measure of credit for the stock price. With new, lower-cost versions of Windows and a more substantial push with Windows Phone, the company seems to headed in the right direction and its stock price now reflects this too.

Microsoft's fiscal year-end is June 30th and we will be curious to see how the company's fourth quarter turns out as they have introduced a lower priced Xbox, dropped licensing costs for small Windows devices and phones, and their new Salesforce with Azure link-up will likely boost adoption of their cloud platform.

With the new 'One Microsoft' strategy in full swing, the early signs appear to be quite positive, and with a stock price nudging upwards, shareholders should be quite happy too.