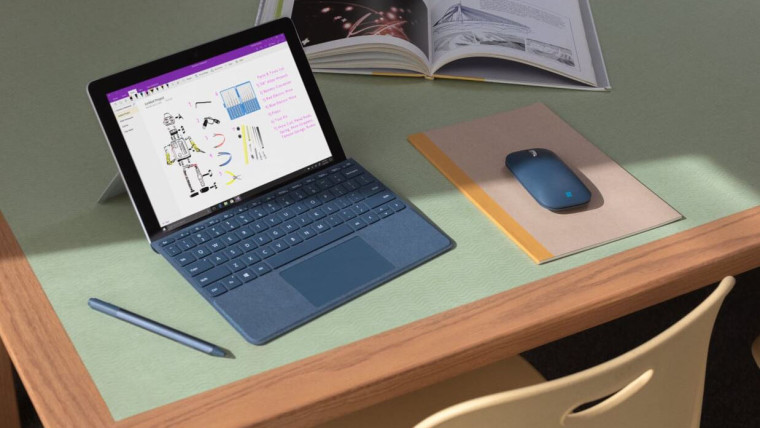 This morning, Microsoft announced the Surface Go, the firm’s newest take on a cheaper Surface built primarily as a tablet. The Surface Go is a $399 device equipped with a 10-inch HD screen, the Surface’s traditional 3:2 ratio screen, a base storage of 64GB and an Intel Pentium Gold processor at its weakest.

The Surface RT, 2, 3 and now the Surface Go are all Microsoft's attempts at cracking the Surface tablet problem, at selling the Surface as something that can be a tablet first and foremost and not simply a hybrid device. The firm is capable of getting users to purchase Surface Laptops and Surface Pros all day long. These are Windows laptops at their core, they are a known quantity. They do laptop things, and sometimes, they do tablet things. But when it comes to small tablets, it becomes a different question.

The last entrant into this market was 2015’s Surface 3, a device we reviewed as one where a user would “have to make a few sacrifices in some situations.” Microsoft has taken some lessons from its experience with Surface 3 and is now shipping it with a more powerful processor, as well as equipping it with USB Type-C, yet the device still remains flawed, and it's the operating system that’s to blame this time.

To put it bluntly, if you're buying a device like the Surface Go, you're likely purchasing it because you want to use it as a tablet. Otherwise, you'd be purchasing a myriad of other, larger-screened options. But the Surface Go doesn't make sense as a tablet, because Microsoft hasn’t invested in building a decent Windows 10 tablet experience, and this goes beyond apps.

Microsoft isn’t the only one trying to retrofit a desktop operating system on a tablet. Google is also making the same effort with Chrome OS. However, Chrome OS’s previous minimalism makes the task easier for the firm, and its integration with Android and the Google Play Store make it more palatable. The other issue, I would say, is that the Surface Go’s tablet functionality is not as good in 2018 as it would have been if Microsoft had released it in 2014.

Say what you will about the previous iteration of Windows — Windows 8.1 — but there's no denying that it worked well on tablets. From the full-screen swipe enabled Start Screen, to the large metro apps, to the charms bar, the user-facing areas of the operating system were built for touch.

With Windows 10, the Windows experience is less of a tablet experience than a truncated desktop one. As someone who has been using Microsoft’s Surfaces and other Windows hybrids for almost 4 years now, the examples of regression go beyond skin deep. The browser, a fundamental app in the operating system, has gotten less touch friendly as Windows 10 has evolved. Microsoft touts its improved keyboard and mouse friendly nature in recent builds, but usability for touch users slips further and further away especially compared to Windows 8.1’s Internet Explorer.

All this would be somewhat forgivable if Microsoft was making some effort to improve this going forward. With the Windows Insider Program, users can test out builds of Windows from about six months before they are released to the public and Microsoft has made no moves to improve tablet mode or touch support on Windows. Users have complained about missing features like multi-selection of tiles for improved app organisation, folder naming, requested a more touch capable File Explorer and more.

It would have made sense if Microsoft were to have addressed such obvious shortcomings prior to releasing the Surface, but the firm has not — not even in Insider builds and continues to plough ahead regardless.

And yes, while the Microsoft Store app ecosystem is a dead horse that’s been beaten over and over, it has gotten worse since the Surface 3. Microsoft is no longer pushing the Universal Windows App ecosystem as hard as it did in previous years and developers have subsequently jumped ship, choosing instead to release warmed up versions of older apps like Evernote, Slack and iTunes in the Windows Store with little to no touch adjustments.

That is not to say the Surface Go is a bad product. The hardware is excellent by all accounts. It is light to hold, designed to be very portable, and will even have its own LTE variant shipping later this year. Despite all that, it is still a compromise riddled machine. A screen not quite large enough to fully embrace a laptop’s role, and software that's not quite touch-friendly enough to embrace a tablet’s role. Microsoft itself isn’t confident enough to market the device without a keyboard despite shipping it without one. Even the price is somewhat undercut by this with the costs of the keyboard and pen pushing the Go to a more realistic $600 starting price for a desirable configuration.

An argument has been made that the Surface Go isn't intended to be seen as the yet another iPad challenger but as a device which lowers the barrier to entry for the Surface line. That's a nice idea, but it isn't the first time that Microsoft has pushed a low-powered, smaller and cheaper Surface, nor is it the second, or even the third.

If Microsoft wants to sell a Surface tablet powered by its ecosystem, one would hope the software maker decides that actual tablet support is a priority sooner rather than later.