Following the announcement of three nettops intended to rival the Asus Eee Box, MSI has unveiled a new product into its Wind range that takes a different and rather unique approach to the all-in-one segment. The un-creatively named MSI Wind Box is a nettop crammed inside a slim black, fanless enclosure designed to be VESA-mounted to the back of your monitor, saving precious desk space and giving you a very inexpensive all-in-one of sorts. 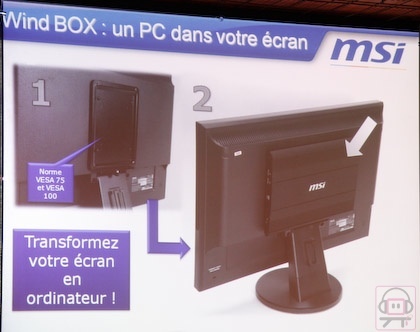 Like virtually every other nettop in town, the MSI Wind Box will boast an Intel Atom N270 processor and either 1GB or 2GB of RAM under the hood. Other specs include a choice between a 160GB or 250GB hard drive, a multi-format memory card reader, three USB 2.0 ports, 802.11b/g wireless, audio ports with 7.1 surround sound support, VGA output and Windows XP. The entire system weighs just 500g and is expected to cost around €200 ($258) when it ships in early 2009.