The original mouse invention which is now in use on every office and home PC turns 40 next week. 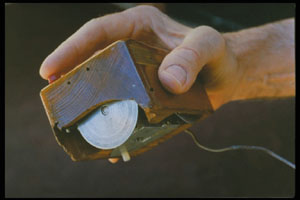 Looking like something that could take your fingers clean off, the wooden block with a single red button on top was unveiled to the world 40 years ago. Douglas Engelbart invented the mouse and worked with Bill English to build the device. In 1967, Engelbart applied for, and in 1970 he received a patent for the wooden shell with two metal wheels.

In 1981, Xerox included a mouse with their Star computer system, and a few years later Apple offered one with their Macintosh system. Microsoft then made it the standard device for their Windows operating system. In time the mouse developed, with a second button then in some cases a third and you can now buy mice with 5 or more buttons.

Unfortunately Engelbart never received any royalties for his mouse invention, partly because his patent expired in 1987, before the PC revolution made the mouse the main input device, and also because subsequent mice used different mechanisms that did not infringe upon the original patent.

Fast forward to 2008 and we have the HP TouchSmart desktop system, Apple's iPhone and a range of new touchscreen enabled devices that are keeping users away from using the mouse. Microsoft is currently working on Windows 7 which improves the use of touch in Windows.

Steve Prentice, an analyst at Gartner Research, said: "I very much doubt that we'll be using the mouse in 40 years' time."

Do you believe that in 40 years time we will no longer require a mouse to interact with PCs or will PCs even exist?