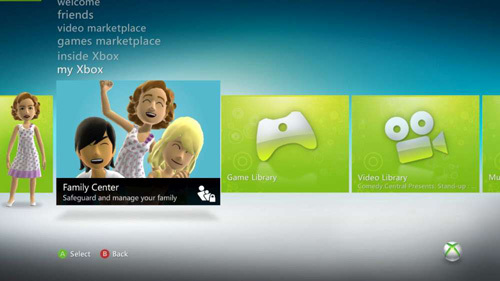 Aside from a few updates, the Xbox 360 dashboard hasn't really changed much for a couple of years now. That is all likely to change if the leaked screen shots and rumors are true. A French site, Logic-Sunrise, posted screen shots of what appears to be a dashboard redesign for the 360. The new dashboard screenshots still refer to Kinect as Natal so they may be a slightly out of date. Even if they were a little out of date, shortly after they posted the images Microsoft sent them a ceased and desist letter ordering the site to take the images offline. Logic-Sunrise complied but we were able to save the images before they were taken down.

The new dashboard has a section in the user interface (UI) for Natal setup and a Natal Tuner application which will be important for the upcoming release of the Kinect. In the Natal setup screen shot Microsoft suggested that you contact @xboxsupport on Twitter if you have questions. Unfortunately unless your question is really simple and can be answered in 140 characters or less you probably won't get much of an answer from @xboxsupport and they will have you call their tech support line.

The dashboard update makes sense for Microsoft, they recently released their redesigned Xbox 360 and they want the console to last another 5 years so they need to keep it fresh to maintain their current audience while attracting new gamers. Kinect is scheduled to be released on November 4th of this year so the dashboard will most likely be released around the same time.

Update: Kotaku contacted Microsoft about the leaked images and they confirmed they are real and that the redesign will be coming in November. "Yes, the next Xbox LIVE update will include Family Center," a Microsoft spokesperson told Kotaku. "As we discussed at E3 it will also include a refreshed Xbox LIVE dashboard, the new Kinect Hub and ESPN. This update will be available over LIVE just prior to Kinect for Xbox 360 being available in store in November. We have no additional details to share at this time."