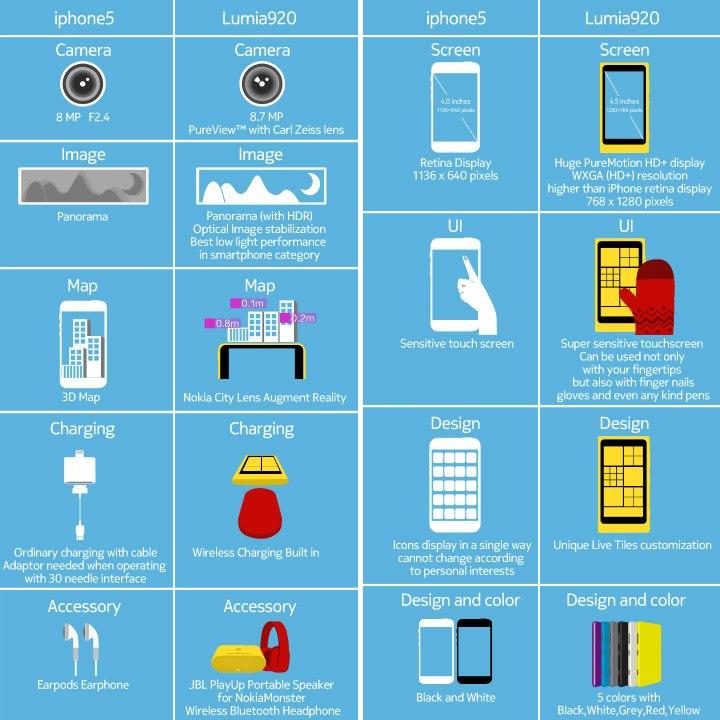 Surprise, Nokia doesn't want you to buy an iPhone 5. That is an obvious statement as the company has recently announced, but yet to provide a release date or price, the Lumia 920 which will go head-to-head against the iPhone 5 when it hits retail.

The Lumia 920 offers up a compelling feature set that bests the iPhone 5 in many regards and Nokia has highlighted those with its latest infographic. The graphic points out all of the features where the Lumia 920 bests the iPhone 5, which is in quite a few areas admittedly, but considering we don't have a release date or price for the device, the graphic is nice, but it only reminds us that we can't have the device, yet.

@bdsams @neowinfeed I think Nokia can't quite count, and they showed of their 820 range of colors.

One other factor that the infographic provides is that it appears to confirm the cyan Lumia 920. If you look at the bottom right side of the graphic, you will see that it says 5 colors available but actually shows 6 devices with the cyan color being present. We should note too that the text of the "5 colors" box does not align to the graphic as red is not present but purple is also shown but not mentioned; Looks like Nokia staff may not know the difference between the Lumia 820 and 920 as pointed out on Twitter, they swapped the images. There are also other inconsistencies within the graphic such as the accessories box shows items that are not included and the charging port information is heavily slanted (albeit not 100% wrong).

For this being an official Nokia graphic, it is quite sloppy on information.

Editors Note: We updated the title, Nokia apparently rushed this item out the door without proper review.