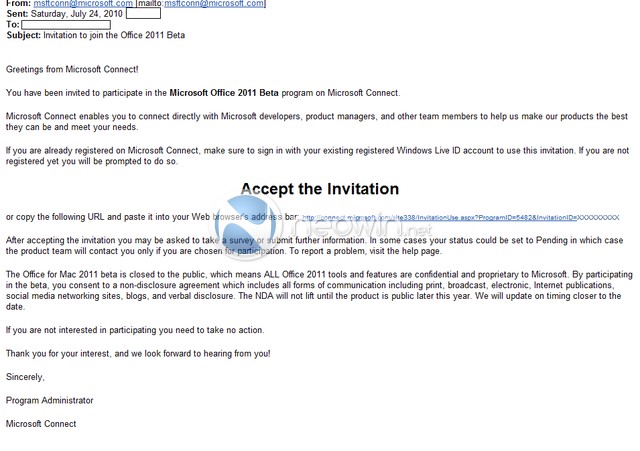 If you have been waiting for your invitation to get into the Office 2011 beta for OS X, check your inbox.  Neowin was tipped off by a reader that invites for the beta have been sent out by Microsoft. The current build number is 100709.

The email states, “The Office for Mac 2011 beta is closed to the public, which means ALL Office 2011 tools and features are confidential and proprietary to Microsoft. By participating in the beta, you consent to a non-disclosure agreement which includes all forms of communication including print, broadcast, electronic, Internet publications, social media networking sites, blogs, and verbal disclosure. The NDA will not lift until the product is public later this year. We will update on timing closer to the date.”

Office for Mac 2011 will also allow for multiple document editing, so users can edit the same document at the same time, without getting a lockout notice.  Office for Mac will include document sharing with other Mac and Windows office users, through SharePoint, SkyDrive and web apps. Microsoft officials say Office 2011 for Mac will be available this holiday season