A few weeks ago, Sprint announced its 5G rollout in four new cities including New York City, along with the announcement of the OnePlus 7 Pro 5G on its network. It's a big deal for OnePlus, which never had a carrier deal until T-Mobile scooped up the OnePlus 6T and later the 7 Pro, so now the Shenzhen company has two U.S. carrier deals.

Naturally, I wanted to test it out. I've not been able to make it to any of Verizon's 5G test cities just yet, but New York City is right in my backyard. So OnePlus sent me a OnePlus 7 Pro and LG sent me a V50 ThinQ. 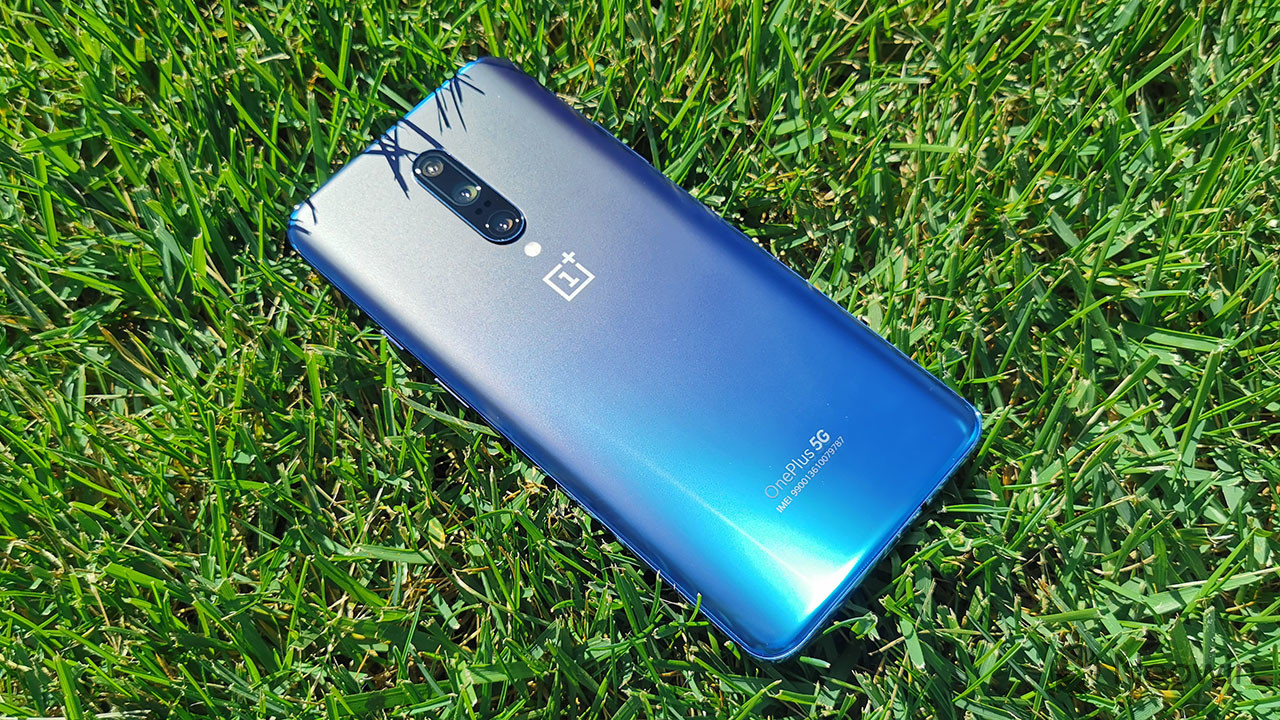 Unlike Samsung's Galaxy S10 5G, which has some perks on top of the regular S10 besides 5G, the OnePlus 7 Pro 5G is the same as a regular OnePlus 7 Pro, except it supports 5G. That's why I called this a semi-review, or a mini-review, because I've reviewed the OnePlus 7 Pro already.

I do encourage you to check out my review, since it's an awesome device. In fact, it's one of my favorite smartphones on the market today, which is why I was so excited to see the 5G version pop up in the U.S. Here are some highlights:

And now for some 5G

If you want 5G in the United States, your options right now are pretty much Verizon and Sprint. But the 5G experience on each carrier is wildly different. Verizon's is faster, much faster, offering speeds in excess of 1Gbps. That's because Verizon is using millimeter wave (mmWave) technology. It's incredibly fast, but it's also incredibly unreliable. You can lose your mmWave signal by just walking a few feet, as it can be blocked by something as simple as a piece of paper or a leaf from a tree.

Sprint, on the other hand, is going with Sub-6GHz 5G; more specifically, it's on the 2.5GHz spectrum. It's using Massive MIMO for 4G and 5G, which allows the carrier to expand rapidly. While mid-band spectrums aren't as fast, they can be more widespread. While Verizon and Sprint are by far the most widespread 5G networks, T-Mobile does have mmWave 5G in New York, so if T-Mobile and Sprint do end up merging, the new carrier could end up with a pretty robust 5G network.

While we can sit and discuss the technology behind 5G all day, you're probably here to see real-world results. After all, you probably don't care what's powering the speed, as long as you get the speed.

My first stop was at Jamaica train station in Queens, NY. Like I said, Sprint is able to roll out 5G more quickly using Sub-6 and Massive MIMO, so it's not just in Manhattan. 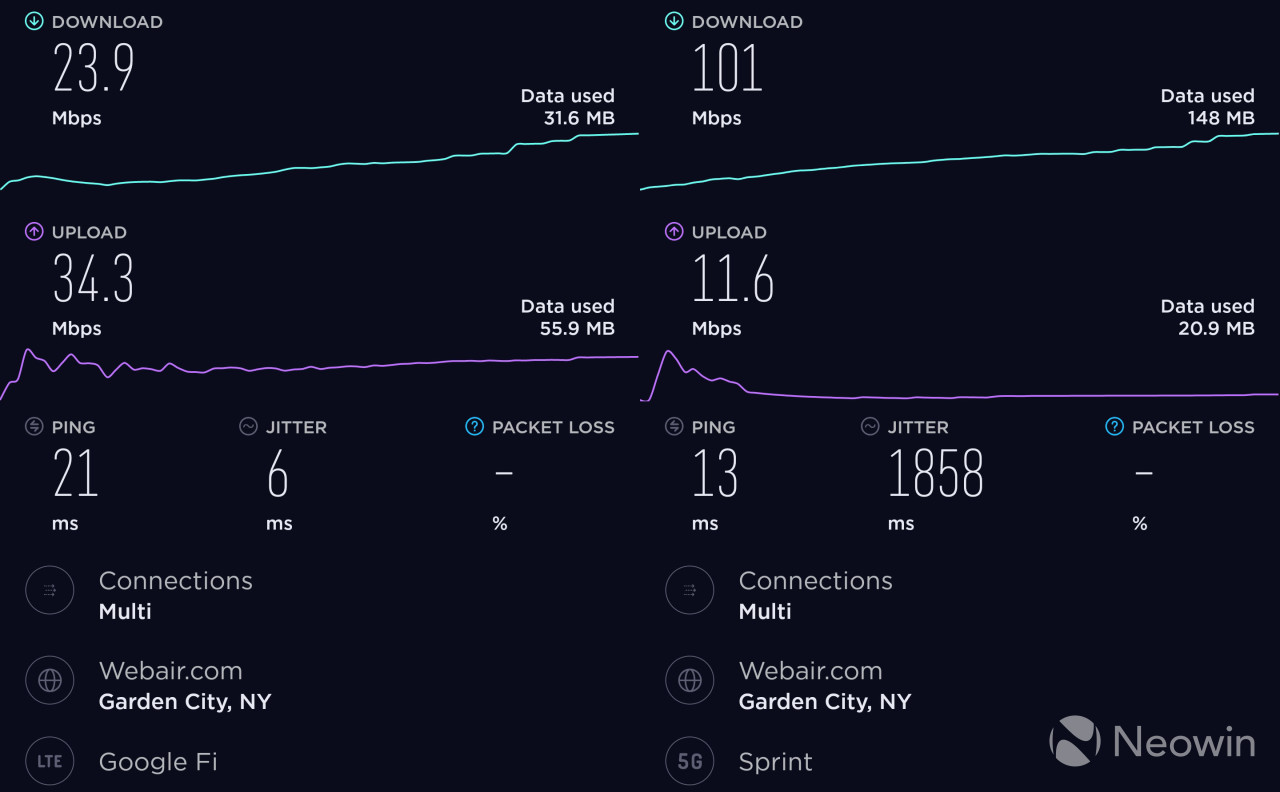 As you can see, the download speeds are about four times as fast on Sprint's 5G as T-Mobile's 4G LTE, coming in at about 100Mbps. 100Mbps was roughly the 5G speed I'd see on a test, although the best I did with this handset was 221Mbps outside of Penn Station, and I was actually able to get 235Mbps on the LG V50 ThinQ in the same spot. 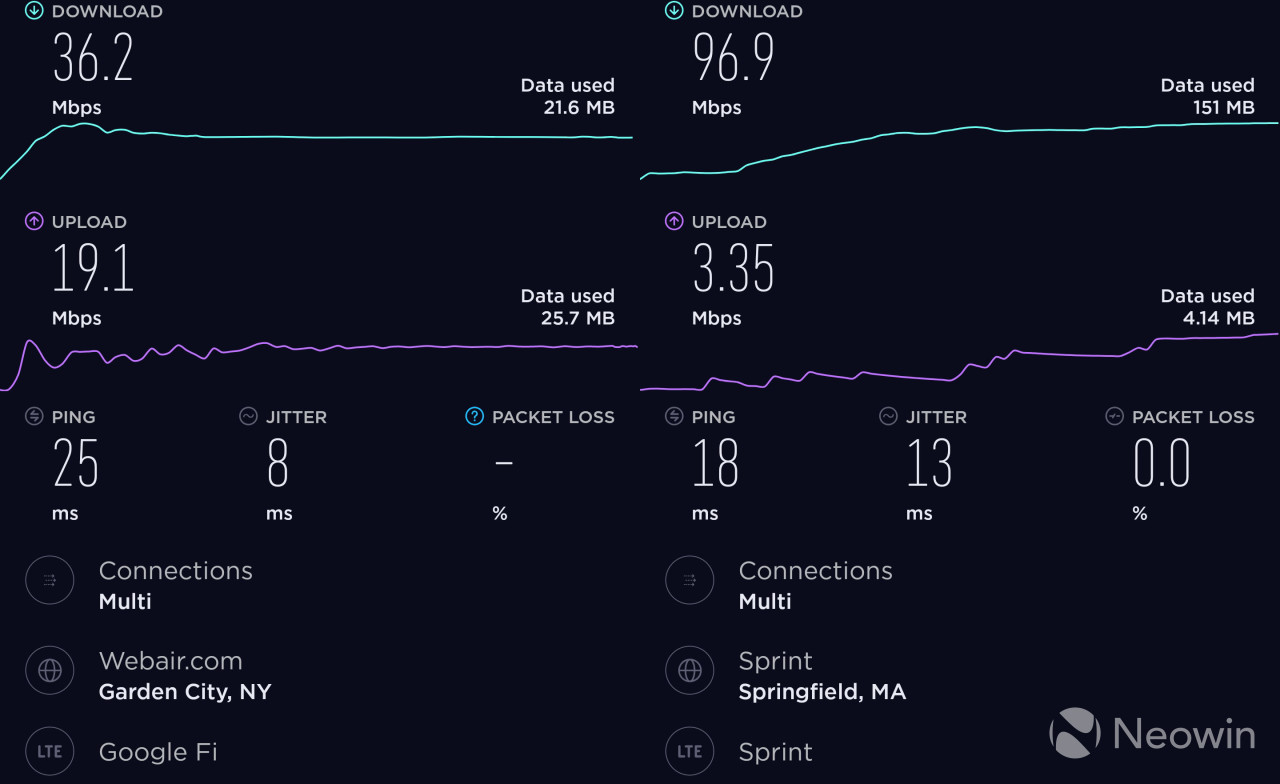 The speeds are around the same. You'll notice that it says that the OnePlus 7 Pro 5G was on LTE. The funny thing is that sometimes the phone would say it's on 5G and the speed test would show it was on LTE, and in those cases, I'd often get the same speeds as I would when the speed test shows real 5G.

Next, I took the subway down to the World Trade Center, before walking all the way back up to 40th St. My next stop was Murray and Broadway. 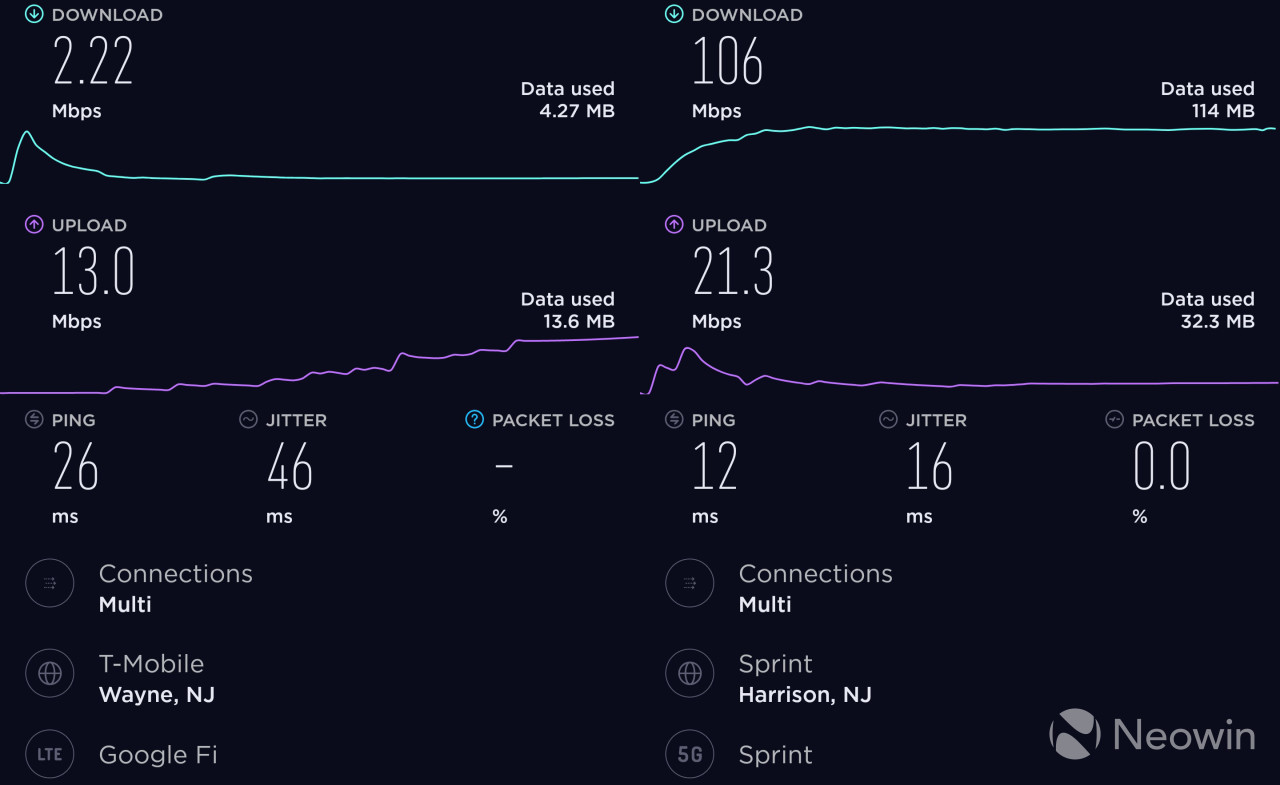 Obviously, Murray and Broadway isn't exactly a top spot for T-Mobile 4G LTE, but we can see the Sprint's 5G once again holds around 100Mbps. Next stop: Canal and Broadway. 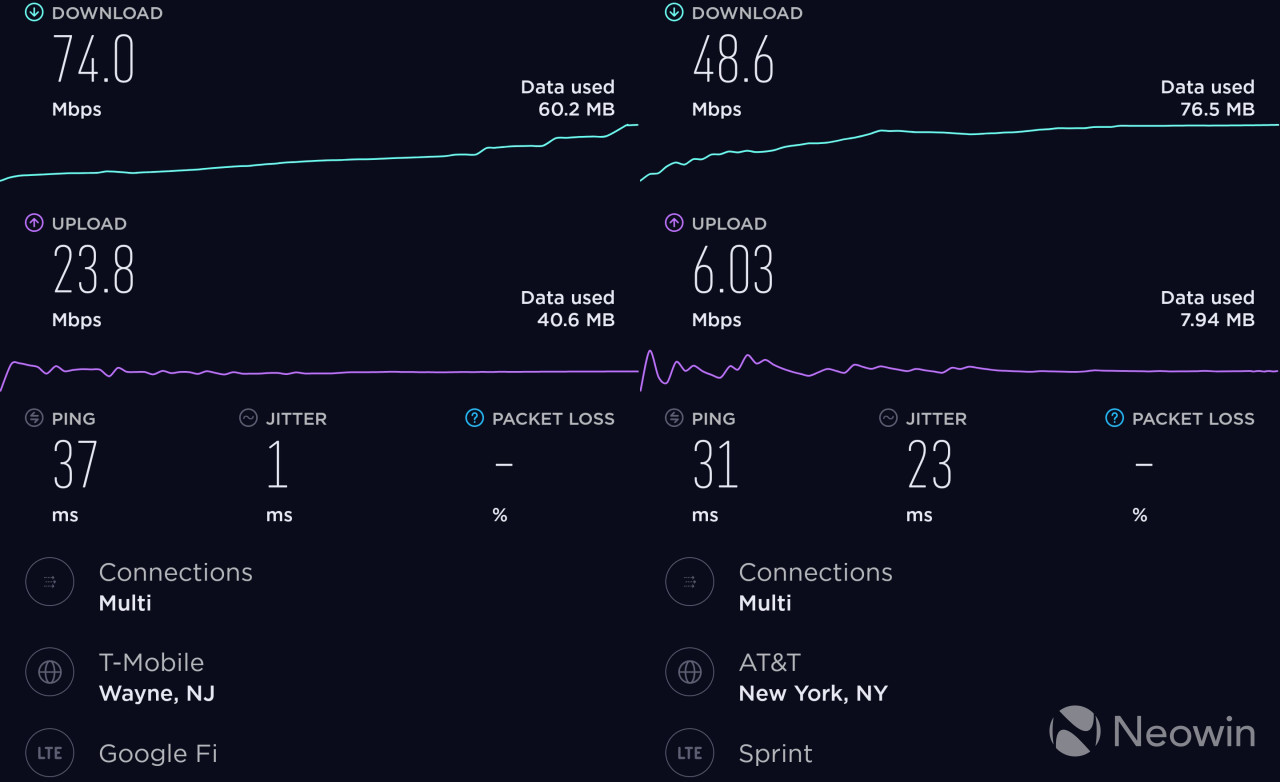 This was the one spot I tested where T-Mobile's network was faster. Still, 48.6Mbps is better than what I'm used to most of the time. The next stop was 14th St and Broadway. 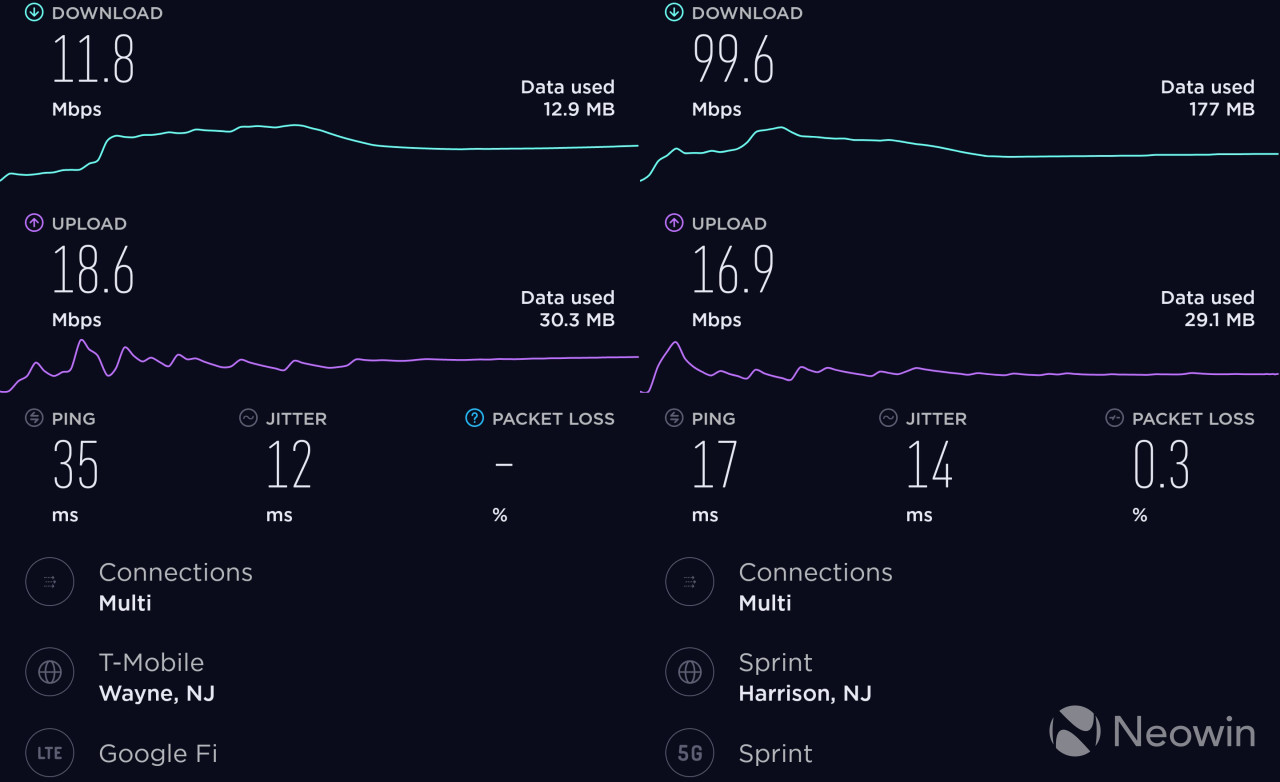 There's a big difference here, with T-Mobile stuck at 11.8Mbps and Sprint back up to its 99.6Mbps. The next stop was 23rd St and 5th Ave. As I mentioned, I walked quite a ways for this test, for about three hours, in fact. 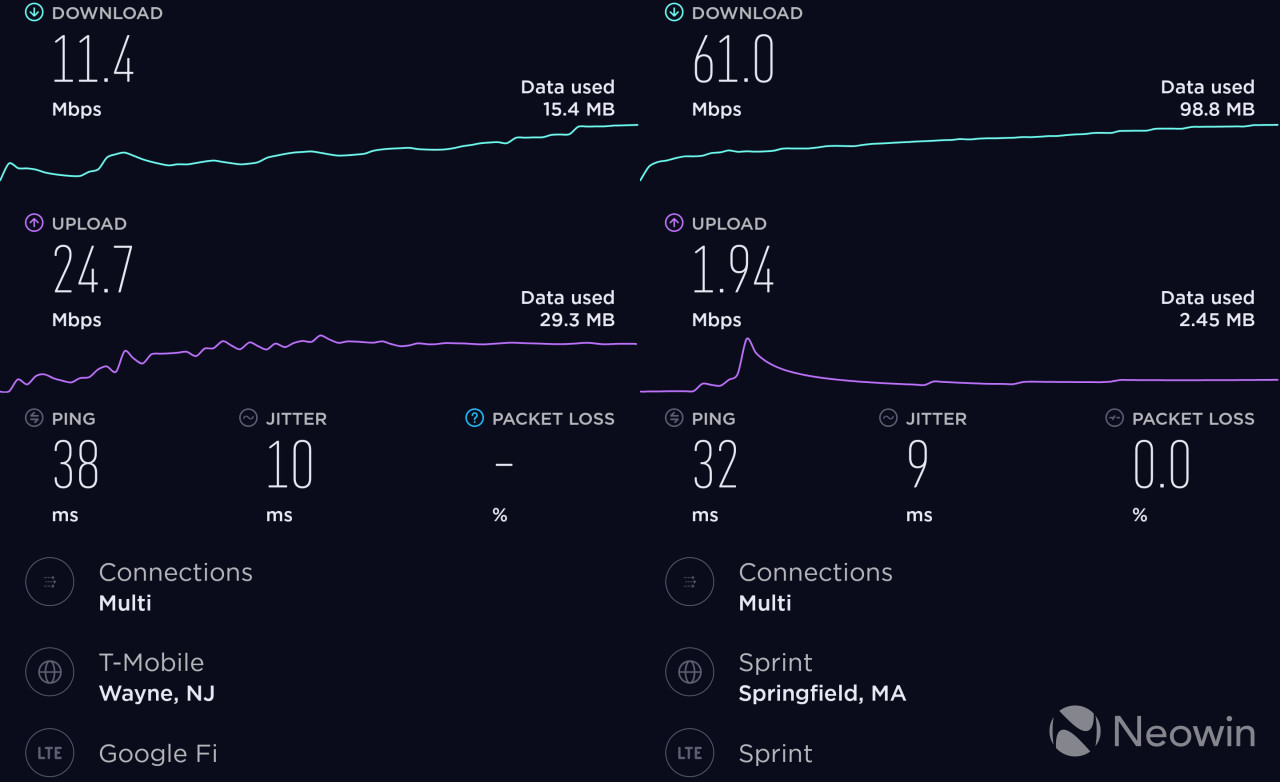 This is another one where the speed test shows LTE when the phone said 5G. And again, it's still way better than T-Mobile's 4G LTE. The next stop was 34th St and 5th Ave. 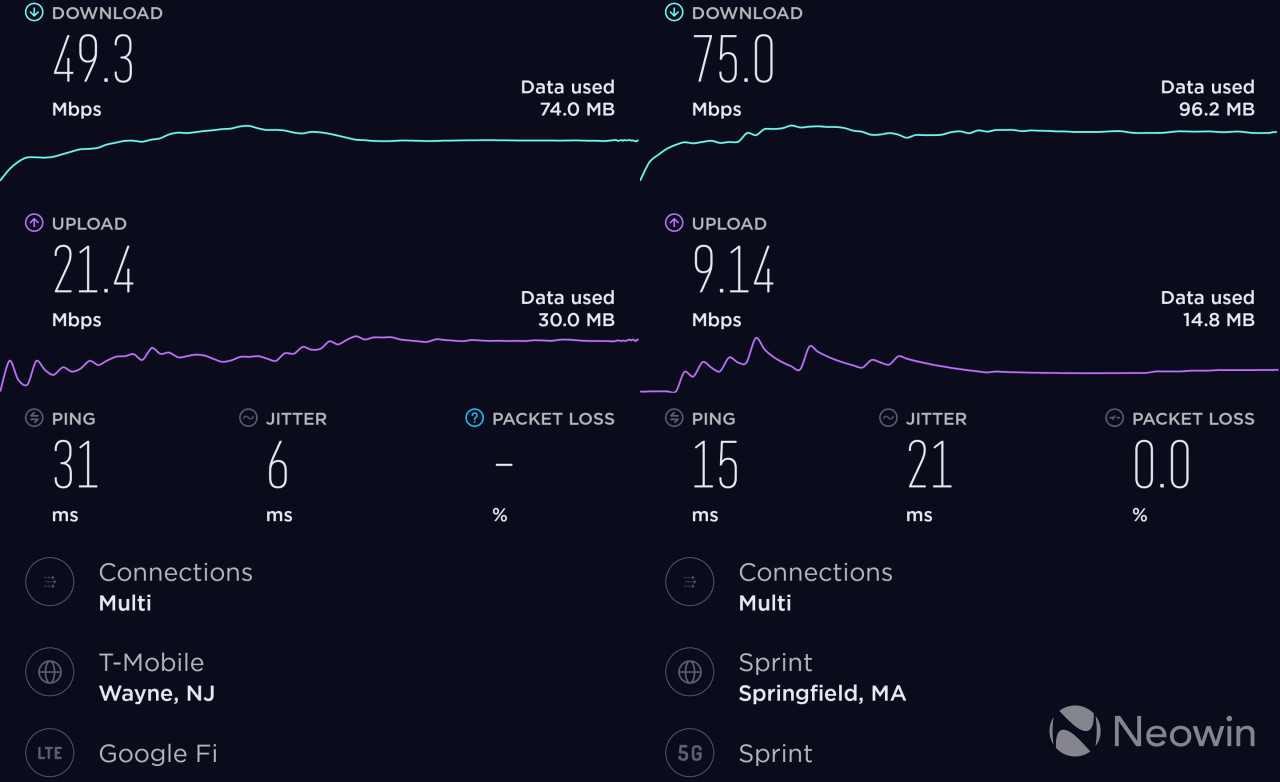 This is one of the slower speeds I got where the speed test actually showed as 5G, where it was only 75Mbps. My last stop was Bryant Park, before I had to head into a meeting. 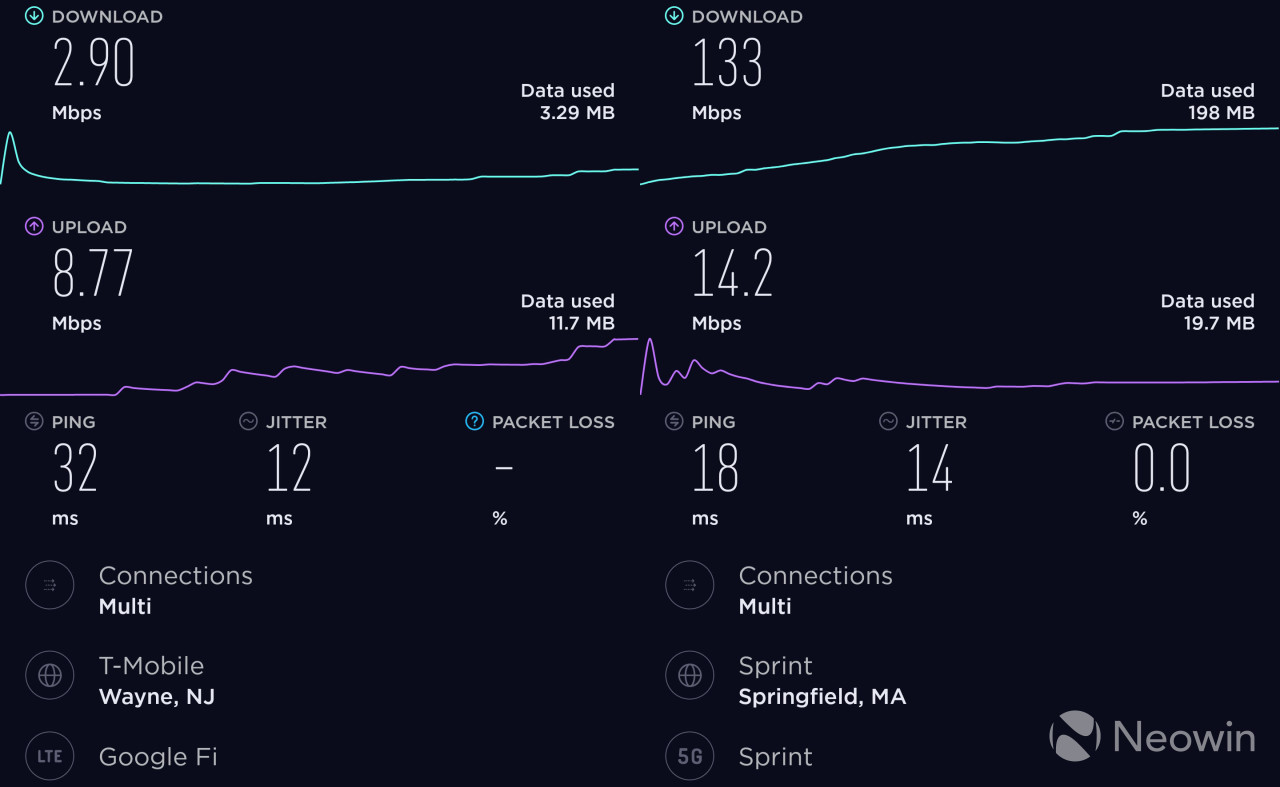 As you can see, there's a huge difference in Bryant Park. This clearly wasn't a great spot for T-Mobile 4G LTE. But one thing I noticed is that Sprint's coverage in general is better. Twice, there were spots where T-Mobile's service just isn't good enough, but I didn't have that problem with Sprint anywhere.

Here's a map of everywhere I went, starting with Jamaica station on the right, taking the train into Manhattan, and walking around.

Overall, I was pretty satisfied with Sprint's 5G network. The mid-band rollout seems like a better approach than mmWave, since you're not going from drastically fast to mediocre LTE speeds by walking just a few steps. In many places I went, I was on 5G, and in many other places, I was on 4G LTE, but there wasn't a huge difference in the speeds that I got while using the handset.

My biggest issue with this is that this is actually the 4G LTE that we were promised, or at least closer to it. It wasn't that long ago that carriers were promising to rollout gigabit 4G LTE, and while that happened in a few select areas, it was never widespread. And then companies like Motorola and Qualcomm started talking about mmWave and multi-gigabit speeds, and that's not happening either. Millimeter wave is a problem yet to be solved, and that's the only way to obtain those kinds of speeds.

Back to the OnePlus 7 Pro 5G

As I said, the OnePlus 7 Pro is one of my favorite smartphones on the market, and this is a OnePlus 7 Pro with 5G. If you're picking up a phone from Sprint, I'd say go with this one. Even if your neighborhood doesn't have 5G just yet, it probably will at some point during the life of the phone.

There are two sides of the 5G equation. One is that 5G is kind of a mixed bag right now, and it's not quite there yet. Sprint will have more bands, and it will support mmWave at some point. Sprint and T-Mobile will likely merge. That means that sooner rather than later, you'll probably want a new phone that supports the new bands and new technologies. 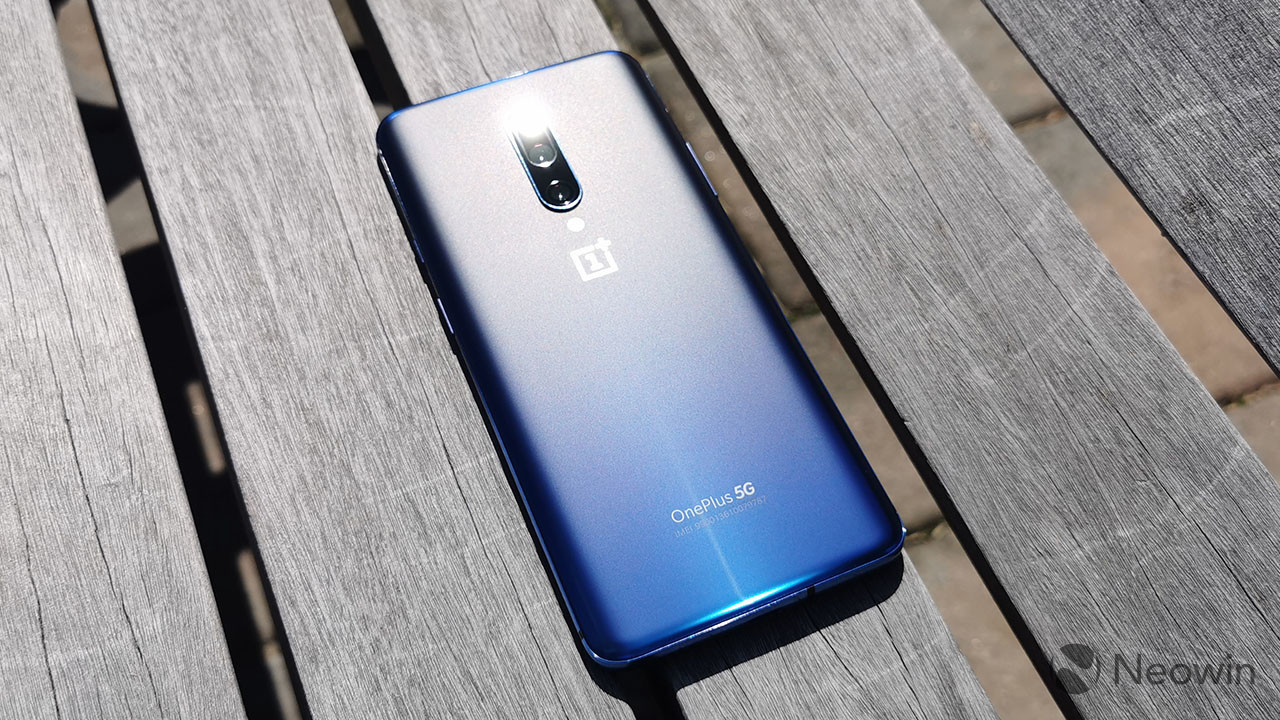 But at the same time, this was true of 4G LTE. Remember, LTE stood for long-term evolution; this technology changed over time. If you wanted a gigabit-class LTE modem that supports all of the improvements in carrier aggregation and multi-input multi-output, you had to buy a new phone for that too.

The truth is that if you buy a Sprint 5G phone in the 5G coverage area, you have faster connectivity than if you bought a 4G phone. That's really all that matters right now. Next year, we'll probably have phones with even faster connectivity, and the same likely goes for the year after that.

The OnePlus 7 Pro 5G is an awesome phone, with a stunning 90Hz OLED display, a solid camera with 3x optical zoom, a beautiful Nebula Blue design, and it doesn't have a notch. This is definitely a phone worth buying.