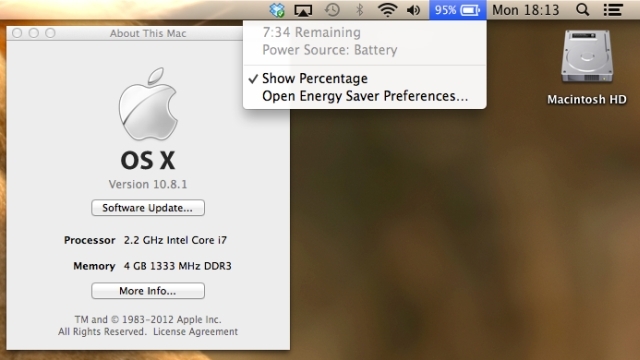 Apple's first update for OS X Mountain Lion is on its way, but the company hasn't elaborated on the changes and fixes in update 10.8.1. However a registered Apple developer with access to the developer seed has found that the update improves the battery life on his MacBook significantly. Before he installed the update, his MacBook showed 4 hours and 5 minutes after a full charge. After the update it shows over 8 hours before the battery runs out.

After the release of Mountain Lion, users began to report big battery drains on their MacBooks. At first Apple didn't respond to questions regarding the matter, but after a week the company started investigating the problem by asking affected users for activity data and system information. Several days ago, a select group of users were offered special builds with presumably a fix for the issue.

The update adresses multiple problems, since Apple has asked developers to test Active Directory, iCal, Microsoft Exchange in Mail, PAC proxies in Safari, SMB, USB, and Wi-Fi. When the update will be released for the public is unknown, but since OS X 10.8 was released a month ago, it's probably sooner than later.