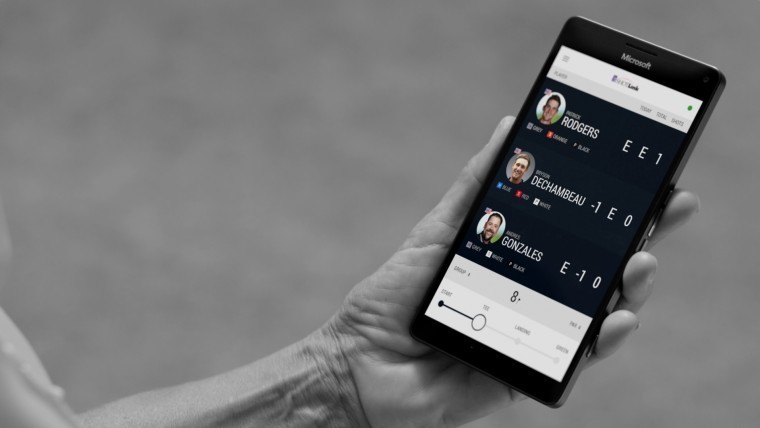 Microsoft has revealed four new applications which will ensure the efficiency and accuracy of data collected by volunteers during Professional Golfers’ Association (PGA) TOUR golfing events, as well as enhancing the experience of the spectator. Built using the Windows 10 Universal platform since their partnership began in November of last year, the apps are being used in more than 800 devices across the PGA, with hopes to distribute the apps to 1300 users before the end of the summer.

PGA currently employs more than 300 volunteers for each event to collate scores and statistics, as well as measure distances of shots using lasers. In conjunction with tech company SMT Jacksonville and Microsoft Services, Microsoft has developed three apps to assist these volunteers in completing their tasks.

Running on Microsoft Lumia 950 devices, the ‘Walking Scorer’ app uses a more user-accessible interface to allow volunteers to instantly see and change player and course data on the go. The ‘Laser Operator’ app, which also runs on Lumia 950 phones and tablets, gathers data from laser sensors used on the greens. The final app created for volunteer staff members, which can be used via Surface Pro 4 devices, is the ‘Grid View’ app. Using ‘Grid View’, a staff member to digitally determine the distance of a shot on the green and input the position of the ball, if a laser operator is unable to see the ball.

An app specially created for the spectator is also being tested in its beta stage. The ‘Tournament Companion’ app will allow spectators to keep up to date with their favorite players using a heat map, leaderboards and statistics. While the developers first aim to satisfy the needs of those on the course, they said they will expand the app to enhance the experience of those watching at home in the future.

The apps will add to existing services for golfers, including the fitness tracker worn on your wrist on the Microsoft Band. Updates rolled out in February ensured that you adhered to the United States Golf Association rules during play, as well as provided the user with a comprehensive rundown of their activity on the course after play.

Another app is being developed by Microsoft which will enhance learning for up-and-coming golfers. Using the Windows 10 platform and Azure, the app will give teachers the opportunity to record, analyze and give notes on each of their students’ swing. Each bit of information can then be uploaded and stored on the Microsoft Cloud.