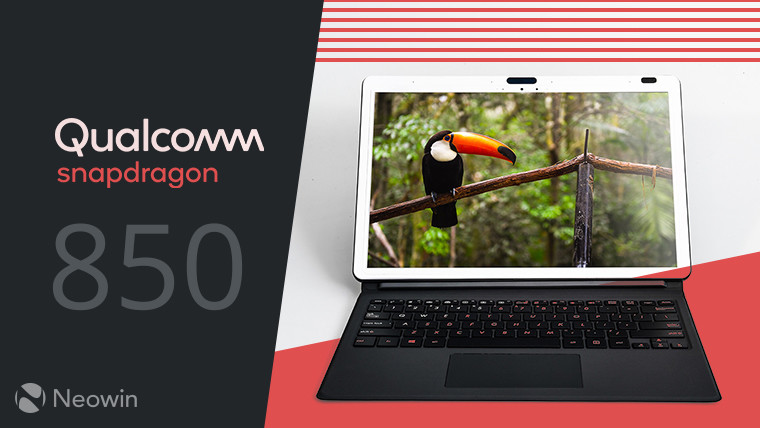 Microsoft and Qualcomm first announced their plans to put Windows 10 on ARM chips in December 2016, promising the emulation of x86 apps. Devices with Qualcomm's Snapdragon 835 Mobile PC Platform were announced a year later, but they haven't exactly been met with praise, due to struggling performance of emulated applications.

Today at Computex though, Qualcomm announced the Snapdragon 850 Mobile Compute Platform, promising a 30% boost in performance, a 20% boost in battery life, and a 20% increase in 4G LTE speeds. Indeed, the company says that when it asked about features that consumers would pay for, 60% said gigabit LTE and 83% said over 20 hours of battery life.

"Building on the portfolio of Always On, Always Connected PCs established over the past year, we are thrilled to work with Samsung to help offer consumers true mobility combined with the productivity and entertainment features of Windows 10," said Alex Katouzian, senior vice president and general manager, mobile business unit, Qualcomm Technologies, Inc. "To truly expand this category, our work with mobile leaders like Samsung is important to help us deliver the next generation of Always On, Always Connected PCs to consumers."

The Snapdragon 850 is largely based on the Snapdragon 845 Mobile Platform, which is used in flagship Android phones. But while the 845 is for phones, the 850 is exclusively for Windows 10 PCs. It includes the same eight 10nm Kryo 385 cores, but they can be clocked at up to 2.96GHz, rather than 2.8GHz. The Snapdragon 850 also includes the Adreno 630 GPU, offering 4K UHD video playback, HEVC video encoding of 1080p video up to 120fps, and more.

Also like the Snapdragon 845, the 850 has the Snapdragon X20 4G LTE modem, which means that it supports downlink speeds of up to 1.2Gbps. This can be compared to the Snapdragon X16 in the Snapdragon 835, which supported 1Gbps. Unfortunately, most carriers don't provide anything near this, but Qualcomm says that with 10MHz licensed spectrum, 90% of carriers should be able to provide gigabit LTE.

"At Samsung, we understand the unique needs of our consumers and aim to create new innovations to support their ‘on-the-go’ lifestyle," said Kyungsik Choi, executive vice president and head of strategic marketing office, mobile communications business, Samsung Electronics. "This collaboration with Qualcomm Technologies and their Snapdragon 850 Mobile Compute Platform will allow us to provide always on, always connected mobile computing experiences for our customers."

The whole package adds up to more power, better battery life, and better connectivity for the Snapdragon 850 Mobile Compute Platform. Qualcomm says that devices with the new chipset will begin shipping this holiday season.