After unveiling Project Natal last year at E3, Microsoft has invited the media to another unveiling of Natal on June 13th and 14th at E3 2010. 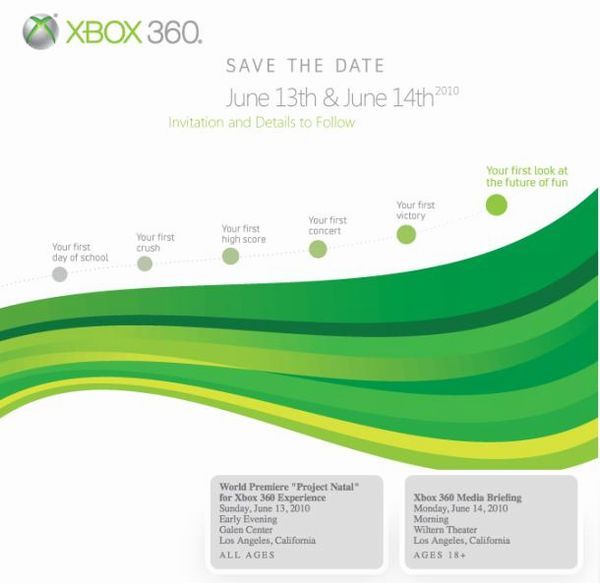 Without any details as to why they are introducing Natal again in the form of a "World Premiere," many speculate that Microsoft is simply bringing a more complete product to the annual technology expo in LA. Project Natal hasn't been properly shown to the public in its intended role as a gaming peripheral, and many are predicting that Microsoft may bring some real-world software to E3 to show off Natal's progress, as well as announce a lineup of games that will be compatible with the hardware.

The timeline on the invitation implies that this isn't the first time Natal has shown itself. With many "milestones" behind the "first look at the future of fun," one could call this premiere of Natal a coming of age event, where all the work done in the past leads up to a more polished, refined, and final product.

This announcement comes after Sony's hands-on demonstration of its own movement based peripheral, the Playstation Move, earlier this week at GDC. In order to properly compete with its only real contender in the movement-based peripheral market, Microsoft's announcement could be seen as a response to Sony's successful public testing of the Move. It would make sense for Microsoft's response to be an announcement for a working product, but this invitation is cryptic enough keep to us guessing until E3 2010.