Mechanical keyboards have something of a community behind them. It's not an especially large community, and it isn't that vocal either. Even so, several companies that cater to this niche market exist.

Here in the U.K., we have QWERkeys, and based on an email sent out to prior customers, there is a possibility of the company bringing their own board to market. Emphasis on the could, as you'll see. 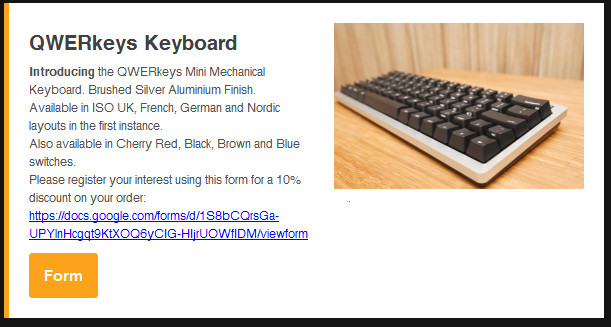 The linked form isn't to order one of the boards, but to register interest. They say that the retail cost will be £100 and that it will be of a high-quality build. For those with an interest in the topic, there's no mention of any OEM manufacturer.

QWERkeys have shown a few images of the board over on their Facebook page, and if you want one it's worth filling in the form. They also dropped a hint about what's doing well at the moment.

It might come across as a strange niche in the world of computer hardware, but QWERkeys must have some faith in it. The company webpage says they were "founded in August 2012", so progression has been swift. Their original product lineup consisted of keycaps for computer keyboards, and has expanded into keyrings and other little trinkets.

Can't wait? The Tex Beetle is a similar board, if you want one now. There isn't much information to go on, but if you're excited, check the form for the 10% discount.

While not a large sample, I personally have bought one of their keyrings as well as a keycap, and on both occasions I've been impressed by the quality.