In March, the research firm IDC announced it expected worldwide PC shipments to go down by 1.3 percent in 2013, and put part of the blame on PC makers for not having enough Windows 8-based touchscreen products to go around. Today, IDC revised its 2013 PC shipment forecast again, and its new prediction shows an even bigger shipment decline. 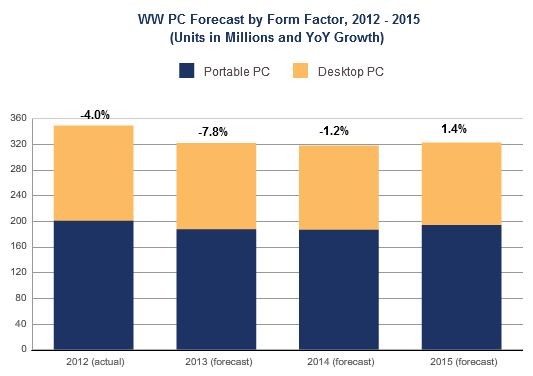 IDC's press release claims that worldwide PC shipments will total 321.9 million units, a 7.8 percent reduction compared to 2012's 349 million units and well below the 2011 peak of 363 million. IDC states that the decline is due to a number of factors, including companies delaying large PC purchases and employees using more tablets and smartphones.

Speaking of tablets, a separate IDC press release today stated that the research firm predicts shipments of tablets will surpass those of portable PCs in 2013 for a worldwide total of 229.3 million units, up from 144.5 million units in 2012. IDC claims that in 2015, the total number of tablets shipped will surpass that of the entire PC market. Ryan Reith, the Program Manager for IDC's Mobility Trackers, is quoted as saying:

IDC continues to believe that PCs will have an important role in this new era of computing, especially among business users. But for many consumers, a tablet is a simple and elegant solution for core use cases that were previously addressed by the PC.