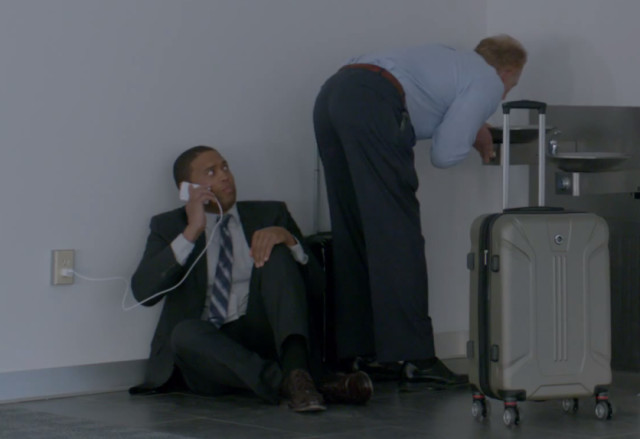 Today, Samsung has unveiled a new ad that focuses on Galaxy S5 and its ability to many ways to maximize battery life. Naturally, Samsung has decided to kick a little dirt at its rival, Apple, in the process. The ad, titled, Wall Huggers, takes places in an airport and focuses on the idea of mobile users that are always clustered around power outlets. We are sure you’ve experienced this scenario, adults, sitting on the ground, trying to charge their devices or maintain connectivity.

Although comical, battery life is one of the crucial features of any device. Luckily, the S5 has an Ultra Power Saving Mode that is reported to be able to eke out a full day of battery life out of just 10% of battery. It does this by reducing the handset to its most basic functions. It will kill the data connection while the screen is off, deactivate NFC and Bluetooth, and also implements a greyscale theme for the screen, that will further allow it to reduce its battery draw.

Although the ad claims to give the user up to a full day of battery life from just the remaining 10%, in our own tests, we were only able to manage about 11 hours. Although this isn’t too bad, it's nowhere near what the commercial touts. The second is a bit more obvious, but it’s the Galaxy S5’s ability to swap batteries on the go. While battery saving modes are nice, it will never replace the ability to swap in a fresh battery. This is an instantaneous way to gain a full charge in a matter of seconds.