It's been a while since Motorola has released a new smartphone in its flagship Droid series. The last such phone was the Droid 4, which came out in early 2012. This weekend, someone using a Weibo account (the Chinese version of Twitter) has posted images of the alleged next version of the series, the Droid 5. 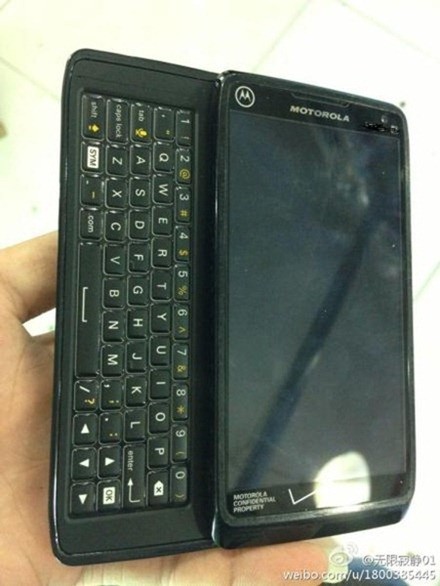 As you can see, the basic design of the Motorola Droid 5 hasn't changed a whole lot from its four predecessors. It still has its trademark slide-out QWERTY physical keyboard, although its buttons may have done away with the capacitive features from previous versions. The display looks to be between 4.3 and 4.5 inches, and the Weibo account leak claims it will have features like NFC, wireless charging and a case that's been made to resist water and dust better than other smartphones.

The case clearly shows the Verizon Wireless logo, which would seem to confirm that the Droid 5 will be sold at that wireless carrier, again just like previous versions. However, there's no other information on what hardware might be inside the device, nor when it will be released. Regardless, it does seem that Motorola is not yet ready to abandon its original QWERTY Droid design under its new owners at Google.