Thousands of people have protested in the capital of Hungary, Budapest, against what they consider an “undemocratic” law that would tax internet traffic in the European country.​ 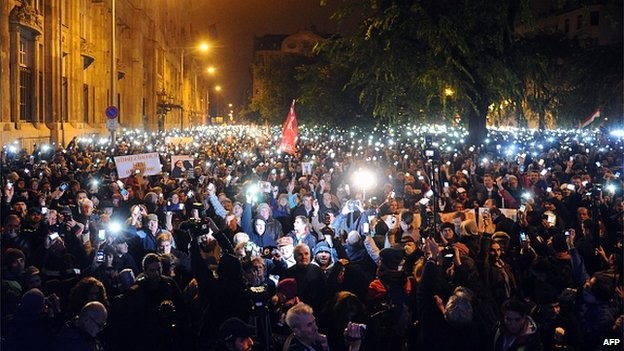 The law has yet to be passed, but incase it were it would allow the government to tax internet traffic at a rate of about 150 forints (€0.50; $0.60) per gigabyte of data. While that may sound scandalous to many of us, the government is arguing that this would only be a tax on service providers, not the regular users. The authorities also hinted at a cap on the maximum amount of tax revenue allowed.

However that has not dissuaded the thousands of protesters that poured into the streets in an effort to stop the law from passing. Most of them fear that ISPs will forward the taxes onto consumers and that this will disproportionately affect the poor. They argue that this is “undemocratic” and will restrict citizens’ access to information and free speech based on their financial situations. 72% of Hungary’s population currently has access to the internet.

The government has reacted by promising a monthly cap of 700 forints, a condition which will be amended to the law.

Update: After tens of thousands protested this proposed law the prime minister, Viktor Orban, has publicly stated the law won't go into effect as is. According to his statement the government will now enter a long period of "national consultation" until a new form, more to public's liking, emerges.