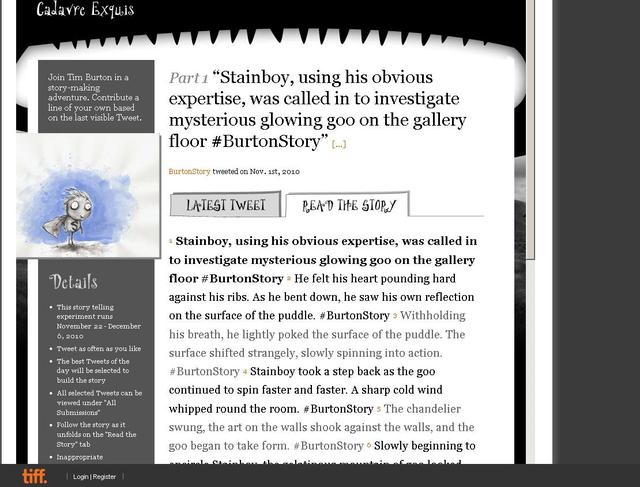 If you’ve ever had the desire to work with an Academy Award and Golden Globe-nominated director, producer, writer and artist, here's your chance.

Tim Burton, the man behind films such as Sweeney Todd, Charlie and the Chocolate Factory and Alice in Wonderland, has turned to the Twitter community to create a story that will promote an upcoming exhibition of his work.

Dubbed ''Tim Burton’s Cadavre Exquis'', the ''story telling experiment'' draws on a collective story-telling technique in which contributors add to the story, each building on the line before their own.

Mr Burton kicked off the experiment on November 1 with a tweet about the actions of a character known only as ''Stainboy''. In the three weeks since, users have contributed 282 tweets, of which seven have been selected to continue Burton's tale. Each tweet must be accompanied by the #BurtonStory hashtag.

The story will come to an end on December 6 and is running to coincide with the November 26 opening of a Burton exhibit at Toronto's TIFF Bell Lightbox.