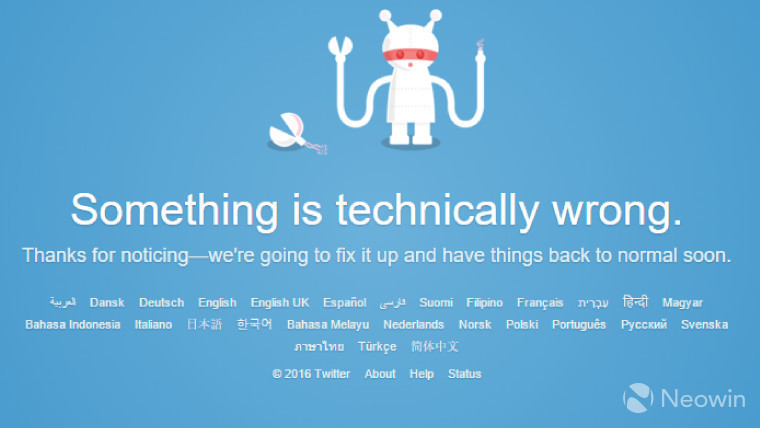 Twitter hasn't had a great year, what with one of its ex-staff managing to temporarily disable the @realDonaldTrump account, or the perception it created for itself by awarding verified blue ticks to less than desirable individuals or groups on its platform, and the role those individuals and groups were able to play using its platform to rally and incite hatred which led to the Charlottesville incident, at which a protestor died. The fallout has continued to this day with accounts losing their verified status or being disabled completely, and today, Monday, December 18, could see a further purge of Twitter accounts.

Today, the company will enforce a part of its updated rules to include the following, that can lead to an account's suspension:

(under) Violence and physical harm

Violence: You may not make specific threats of violence or wish for the serious physical harm, death, or disease of an individual or group of people. This includes, but is not limited to, threatening or promoting terrorism. You also may not affiliate with organizations that — whether by their own statements or activity both on and off the platform — use or promote violence against civilians to further their causes. We will begin enforcing this rule around affiliation with such organizations on December 18, 2017.

And further down the page:

(under) Abuse and hateful conduct

Hateful imagery and display names: You may not use hateful images or symbols in your profile image or profile header. You also may not use your username, display name, or profile bio to engage in abusive behavior, such as targeted harassment or expressing hate towards a person, group, or protected category. We will begin enforcing this rule on December 18, 2017.

The important thing to note here is that from today, Twitter will also be looking at affiliations with "activity both on and off the platform" leading some to believe that a ban could follow simply by association with an account or activity outside of Twitter that is deemed hateful, or violating the company's updated rules.

From when the new rules were announced back in November, but certainly in the past week, the #TwitterPurge hashtag has been gathering pace, with people saying their goodbyes via their Twitter accounts in anticipation of a massive purge of accounts, some have even compared the enforcement date with Stalin's birth, and the end of free speech.

All my 'likes' have been wiped from this thread, as part of the Orwellian #TwitterPurge targeting Progressive thinkers. Seems you made the target list. This will all be pretty funny when their business crashes & burns, & they realize that they're the dog that caught the car.

December 18, 2017, and so will begin the purge. Are you ready? #twitter #TwitterPurge pic.twitter.com/kS9gedb5st

However, even though some have incorrectly claimed in reports, Twitter does not explicitly mention the alt-right or neo-Nazi groups in the rules, its new policy more broadly seeks to outlaw “specific threats of violence or wish for the serious physical harm, death, or disease of an individual or group of people.” Or to put it plainly, hateful people in general.

Notably, though, Twitter has said it would be monitoring groups’ behavior outside of the website, as it makes its decision as to whether users have violated its new guidelines. In any case, it's unlikely we will see millions of accounts wiped; ultimately, those that spread fake news and hate are the ones that should be worried about the updated policy rules.