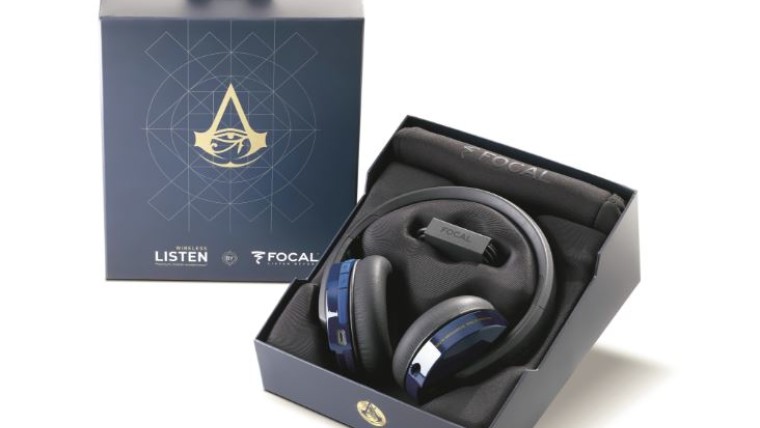 Do you particularly love Assassin's Creed to the point where you just have to have one of ten limited edition 18-carat gold headphones? Well, you might just be in luck. Ubisoft just announced a new partnership with the French jeweler Tournaire, and Focal, bringing two limited-run headsets and a bust of the main protagonist in celebration of its upcoming open world game set in ancient Egypt.

The new range of headphones starts with the Assassin's Creed Origins 'Listen' headphones, of which there will only be exactly 2,222 available for sale exclusively through the Ubisoft Store. The headphones will be customized Focal Listen headphones and feature Bluetooth connectivity with a battery that will last for up to 20 hours. Beyond that, the headset will feature two microphones for 'clear voice capture' as the press release reads. The 'Listen' set will retail for €249 and general availability will be announced closer to the launch of the game.

If the aforementioned headset isn't satisfactorily exclusive, you can try to get one of ten limited edition Assassin's Creed Origins 'Utopia' headsets hand-crafted by Tournaire. These headsets, designed and built by a goldsmith and a 3D artist, feature 18-carat gold inlays that 'celebrate ancient Egypt'. The rest is much the same as the 'Listen' range, with it being powered by Focal and featuring Bluetooth connectivity. However, there are only ten of these being made, making them plenty exclusive.

The 'Utopia by Tournaire' headset will set you back an eye-watering €50,000 and is available with a bronze bust of Bayek, the main protagonist in the upcoming game which launches on October 27. Assassin’s Creed Origins 'Utopia by Tournaire' and the bust can be viewed - by appointment - at Tournaire’s boutique in Paris.

Assassin's Creed Origins is set to launch on Xbox One, PlayStation 4, and PC next month. The game is available for pre-order on the aforementioned platforms right now, at the Ubisoft Online Store, or at other retailers.